Before I get to the meat of this blog, I have to announce that today is my release day for the third book in my Veil Series, Lifestyles of the Fey and Dangerous. I’m very excited, naturally, but I’m even more nervous. You’d think I’d be over the new book jitters, but this book means a little more to me than the other two.

I always try to write strong, spunky heroines. I adore reading/writing a book about a woman who doesn’t wilt like a fragile flower under pressure. I want her to be strong, yet vulnerable. I want her to be funny and intelligent. I want her to fight for what she believes in. I think that’s what most readers want out of their heroines. The days of the shrinking violets are gone, I believe and good riddance.

When I was writing Lifestyles, all I knew about my heroine was that she was an assassin for the evil faction of the Veil. Not exactly heroine material, but as I got to know her, I realized she was ripe for redemption. Y’all, the things I did to this character! I can’t even fathom where I thought up her past, but the more I wrote, the darker her past became. She’d gone through so much pain and suffering, I had to give her a happy ending. 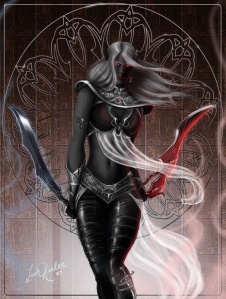 And that’s when I paired her with her hero. He had to be someone who had a dark past himself, who’d understand the trials and tribulations she’d gone through and admire her for them. Sure, she was supposed to kill him and she was messing up his redemption, but they could get over that.

Danica Avet lives and writes in the wilds of South Louisiana. Unmarried with no children, she's the proud pet of two cats and a dog. With a BA in History, she decided there were enough fry cooks in the world and tried her hand at writing. Danica loves losing herself in the antics of her characters and blushes more often than not at the things they do. She likes to define her work as paranormal romance with a touch of Cajun spice, but most times her characters turn the notch up to "five-alarm fire"!
View all posts by danicaavet →
This entry was posted in writing and tagged anti-heroines, books, paranormal, fantasy, hot, cold, pain, blisters, tan, Janette Harjo, love,Books To Go Now!, heroines, lifestyles of the fey and dangerous, Romance. Bookmark the permalink.

9 Responses to Hear Her Roar