Did I scare you?  No?  Not even a little bit?  Not even with my blood red lipstick, matching nails and creepy, yellow cat eye contacts?  Really.  Did you look close enough to catch the vampire fangs?  Hmmm, I’m gonna have to work on my scare tactics.

I guess that’s the thing about me.  I’m not into dreadfully scary stuff.  Slash ’em up horror flicks just aren’t my trick-or-treat bag of candy.  But I do love Halloween.  I love the festivities.  I love the excuse to dress up, although it’s a bit of a challenge these days.  One trip through your seasonally open Spirit Halloween store seems to substantiate the idea that reasonably sane and educated women are looking for an excuse to dress like a stripper.  Either that or a giant unisex crayon.  Which is probably why I recycle my costumes every few years.  It’s ridiculous to spend a fortune for a costume you wear one night a year, maybe a few if you’re really popular and get invited to a few parties.  But I’ve done it.  The vampire costume above has been used for at least three Halloweens.  Back when my kids were little, we did the family costume look.  We did the Wizard of Oz and Peter Pan.  There was a family of cats (lions and tigers, but no bears….oh my!)  But my kids put a stop to that when I couldn’t really tie ninjas and princesses together.  There have been several Star Wars years on the part of the male members of the family.  My only rule is that I have a COOL costume.  But I have to admit, if I was in shape enough, I’d probably go for one of those Hookers R Us costumes.  Probably not when I’m serving Yoda Soda at my kids’ Halloween parties, but I’m sure my husband would love it if I could pull off that Slave Princess Leia costume.  Most of my costumes tend to keep me a bit covered up.  Who knows what the temperature is going to be come October 31 and I HATE being cold.  Granted I sweated an awful lot in my fake leather Trinity from The Matrix costume, but it was totally worth it.  (My school allowed costumes and I taught a lesson on matrices that day.  I still hear from students how cool they thought that was.)  But I think my favorite costume was last year’s.

Let me say, I HATE snakes.  I am dreadfully fearful of them ever since I nearly stepped on a very large orange one when my little sister and I were walking through a nearby field when I was about five.  Flash forward to junior high.  We were learning about Greek mythology and some of the boys thought it funny to call me Medusa for the way humidity wreaked havoc on my naturally wavy hair.  Being overly sensitive, somewhat shy, and nonconfrontational, I had to fight hard not to cry.  (I learned many years later that one of the boys thought my hair was cute that way.  Junior high boys seriously need to work on their flirtations skills.)  So what would possess me to WANT to go in costume as a snake-headed Greek mythological creature?  Perhaps it was the Clash of the Titans remake, perhaps it was my oldest reading Percy Jackson, or perhaps it was the not-super-high-in-demand costume (like Lady Gaga).  However, I’d say most of the credit goes to possession of a pair of creepy, yellow cat eye contacts and the fact that I was required to attend a certain party where I would have desperately wished for Medusa-like powers to turn a particular someone to stone with just a look.  That and I wouldn’t have to look at myself.  The costume itself was pretty basic, but throw in the contacts, a green and black wig with rubber snakes from the dollar store attached, and a rarely worn pair of snakeprint heels and my look was almost complete.  My favorite part was my staff.  PVC pipes, black duct tape, green glitter glue, and the head of a large rubber snake.  My husband wasn’t too keen on his wife looking too creepy (he was still hoping for slave Leia), but I bribed him to be Perseus so he could threaten to chop off my head in case I got too bitchy and cut too many frozen-to-stone glares at anyone.  Not my best picture, but check this out…. 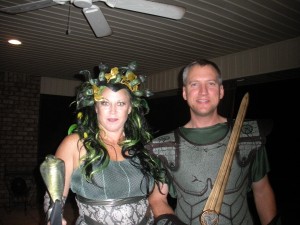 Are you scared yet?

What have been your favorite costumes?  Was it scary?  Sexy?  Glamorous?  Goofy?