This Friday is Veteran’s Day so I decided to kick off the week by celebrating my favorite military movie from my high school days with one of my favorite actors from back in the day.

Yeah, Tom Cruise.  There.  I said it.  Pre-Oprah’s-couch-jumping Tom Cruise.  Back when I didn’t care whether Tom was a good actor or not.  I wanted big screen eye candy and baby, Tom delivered every time.  Heck, he still delivers though his star is a bit tarnished.  But by golly, he does look good in a Navy uniform.  Even when he’s pissed and demanding the truth. 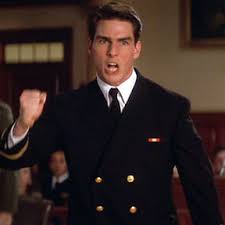 But back to “Top Gun”.  Every year, the senior class at my high school went to see a movie as part of our final week together.  The class before us was supposed to see “The Breakfast Club” but gasp!  It was rated R and somebody’s parent threw a fit and blah, blah, blah.  The class of ’85 had to go see some other movie at the last minute.  (FYI – I have no doubt “The Breakfast Club” would have received a PG-13 rating had that level been around in 1985.)  I have no recollection of what the consolation movie was for ’85, but 26 years later, I remember what they were supposed to see.  As for our senior class, no R-rated movie even made it onto the ballot.  I don’t remember the other choices, but I seem to recall it was some sappy chick flick and probably something to satisfy the adrenaline junkies or bathroom humor enthusiasts.  I was one of our class officers and I campaigned much harder for the choice of “Top Gun” than I did for my own elected position.  It had something for everyone.  It was a love story.  It was a Bromance well before the term Bromance came into existence.  It had fast machines.  “I feel the need.  The need for speed.”  Heck, it even had a couple of musical numbers.  (I keep waiting for those damn Glee kids to do a mash-up of “Top Gun” songs.  You just wait.  And you can say you heard it here first.)  But most awesomely, it had a volleyball scene. 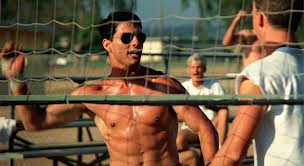 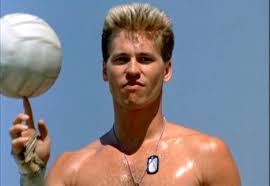 I don’t have any statistics backing me up on this, but I seem to recall an article came out sometime after this movie where the Navy acknowledged a surge in their recruiting numbers due to the popularity of “Top Gun.”  As much as I love the movie and the superstar actors in it, I have a greater weakness for the real deal.  Like this dude…

I also have a shirtless picture of this guy somewhere, but I don’t want to make all you other gals jealous.  I don’t think he was playing volleyball either. 😉

Whether or not you have your own “Top Gun”, let’s remember to honor all the men and women who serve our country as we celebrate Veteran’s Day this Friday.  To all of our veterans, I offer a heartfelt, “Thank you” whether or not you venture into the danger zone.