Rockin’ Down the Highway

It’s Super Bowl Monday!  Meaning some of us stayed up past our bedtime and are paying the price now.  But some of those commercials are pretty cool even if they have very little to do with the actual product being marketed.  Like the car commercials.  I love Clint Eastwood so I dug the Detroit car companies comercial.  Sorry, I don’t recall the specifics, but I think of it as more of an ad for Detroit in general, like the one they did last year using Eminem.  Loved the Honda commercial/Ferris Beuller spoof with Matthew Broderick!  Hello!  Eighties teen here.  Of course I was bound to love it.  The Volkswagen commercial with the dog who gets fit to chase the car?  That was pretty good until the end.  The end pushed it to great.  I admit I liked the Doritos commercial too.  It also featured a dog, but I didn’t plan on talking about dogs this week.

Cars.  I don’t remember much about my first car.  It was a red Starfire.  I have no clue who made it, only that they are made any more.

My younger sister had a black one which outlasted my red one because I ended up with it in my second year of college.  Maybe it was my third.  Until the wheels fell off of it on my way back from a teacher observation at Sunset High down in Miami.  Then I had a brown Camaro for a month. 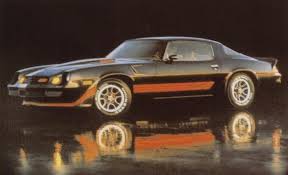 It didn’t look exactly like this when I got it and it certainly didn’t look like this after that first month.  I got in a wreck exactly 23 years ago today.  How do I remember it to the day?  It was my then-boyfriend/now husband’s 21st birthday.  (Happy birthday, honey!)  I was on my way to the post office to pick up some brownies my mom sent for his birthday.  (She liked him just as much back then as she does now.)  Next was a white Monte Carlo for about half a year.  It was stolen just about right out from under my nose.

What?!  No picture?!  Did someone steal that too?  Dang!  A red Trans Am with T-tops replaced the Monte Carlo.

(Again, not my actual car.)

The remarkable thing about all of these cars?  All of them were during my college years.  I wasn’t very kind to my wheels back then and they got even with me in the worst ways.  I’m a lot nicer to my current Honda Odyssey (yeah, such a mom car), even if I don’t look nearly as cool in it as I did in the Trans Am.  But you know what?  My van has air conditioning and a much better sound system than all of the previous cars put together.  And if a Honda is good enough for Ferris Beuller, it’s good enough for me.

6 Responses to Rockin’ Down the Highway