I’m the younger sister, ergo, my first car was shared. My sister and I shared a car named Robert. We have always had a family tradition of naming our automobiles. My dad once had a black and blue truck that I named Bruise. I mean, really, it fit, you know.

I actually learned to drive in a V8 Pontiac Grand Prix and that sucker would go and I mean go fast. In fact, the first time I drove that puppy, my foot slipped off the brake and onto the accelerator and I almost hit a tree before my dad could grab the wheel and I could find the brake again. It was pretty wild.

Back to Robert, though. My sister drove him for a year and a half before I got my license and then we both shared him. He was powder blue. I took my driver’s test in him and the tester said he really should fail me because I needed a car with power steering, but as long as I promised not to try to parallel park, he’d let me have my license (it’s kind of funny now because I’m a champion parallel park-er and have actually gotten out of the passenger seat on occasion to park for the driver).

So, why was my car named Robert? I know if you know me, you have to know there was a logical reason for his name just like there was for Bruise’s name. My first car was a Mercury Bobcat. So, Robert was totally an appropriate name. 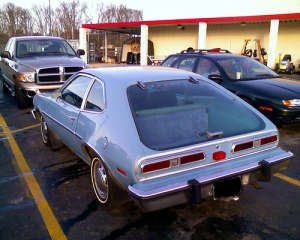 Oh, and as an aside, today is release day for my new book, Sebastian’s Salvation. http://www.bookstrand.com/sebastians-salvation -See sidebar for the cover.

The author of these blog posts is a lawyer by day and fiction writer by night.
View all posts by Author →
This entry was posted in Miscellaneous and tagged auto, car, driver's license, Jillian Chantal, mercury Bobcat, Pontiac Grand Prix, Sebastian's Salvation, sirenbookstrand. Bookmark the permalink.

16 Responses to Robert, My First Car