I need to apologize for last week’s absence.  I really wanted to talk about how “Love Actually” is one of my favorite love movies in time for Valentine’s Day even though that movie is set around Christmas.  It opens with scenes at an airport and Hugh Grant’s voiceover talks about how when the Twin Towers fell on September 11th, those last minute messages were filled with love.  Those airport scenes (which also close the movie) are of people hugging and kissing their love ones.  Incidentally, my reason for missing last week’s blog was that I was on an airplane, flying home (when I wasn’t being delayed – mechanical issues) from south Florida.

This week the topic is a time when we were scared to death and feared for our lives.  Unless I’m wrong, in which case I fear my blogmates are going to kick me off for good.  Please don’t!  Incidentally, my greatest brush with death – aside from when I was a kid and really ticked off my parents – involved an airplane. 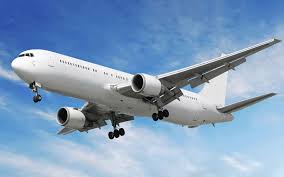 “Folks, this is the captain speaking.  We have a small problem.”  Um.  No.  You don’t.  If you feel the need to tell me about it, it’s no longer a small problem.  It’s a major problem.  “We think it’s just a burnt out light bulb, but the indicator light for the landing gear is not coming on.”  We’re 10,000 feet in the air.  No.  This is NOT a small problem.  “The tower is going to have another plane fly under us to take a closer look.”  So what am I supposed to do?  Look out the window and wave as it passes by?

Now this was back in 1993.  I had just left Florida (my real home) to fly back to California (my temporary Navy-assigned home).  I remember my mom crying at the airport as if it were the last time she was ever going to see me again.  I remember thinking how ridiculous she was behaving.  And then the captain came on with his so-called small problem.  About an hour before, the gal in the window seat next to me asked me how much long the flight would be because she was jonesing for a cigarette.  (This flight was from Charlotte to Los Angeles.  The middle segment of a JAX-CLT-LAX-SFO ticket.)  Now, I don’t smoke, but after what happened after the captain’s little announcement, I was ready to take up a new vice.

So after the other plane checks us out, “Nice tail,” the flight attendants start doing their little bit about emergency procedures.  You know the one about exits, seat belts, and all that stuff they do where no one pays attention at the beginning of the flight?  Well this time we paid attention.  Then they had us PRACTICE unlatching our seatbelts.  We were also shown brace positions.  And when we got the signal, we had to assume those positions.

It’s been 19 years, and I still recall the tears and the fears going through me all at once.  I kept telling myself, “It’s just a burnt out bulb.  We’re going to be fine.  Oh my god, what if we’re not?  Mom acted like it was the last time I’d ever see her.  What if it was?  Oh god.  I’ve only been married 2 months.  I’ll never see the love of my life again.  I want to live.  It’s just a burnt out light bulb.”  Repeat several variations of the same mantra.  I felt ridiculous for crying.  I think I scolded myself as reassurance that everything would be okay.  But this was all I could picture: 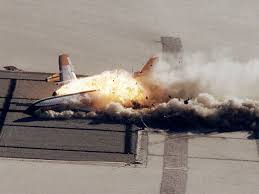 Our landing was one of the smoothest I’ve ever had and the cheer that erupted when we touched down still gives me goose bumps.  I remember looking out the window and seeing all the firetrucks following the plane to the terminal.  I remember the flight attendant’s shaky voice as she tried to do her usual end-of-flight spiel.  I remember getting off the plane and stopping at the bar for a vodka and cranberry and the bartender’s question.  “Would you like to make that a double for only a dollar more?”  Did I look that bad?  And where was my cigarette-needing seatmate?  I was ready to buy her a drink in exchange for one of her cigarettes.  I answered, “Hell, yes.”

The funny thing is that I still had to get on another plane immediately after that.  And I did.  And I was fine.  And shocker of shockers…I still love to fly.

10 Responses to A Death Fly-By