Guest Author (and My Brother)
By Jeff Salter

I’ve hosted nearly 20 Guest Foxes during the 93 weeks we’ve had Four Foxes One Hound up-and-running, but this week it’s a special treat to host author Charles A. Salter.  Not only is Charles my co-author in several non-fiction projects, but he’s also my valued and extremely helpful beta reader.  Even more importantly, he’s my brother … and friend.

GIVEAWAY!
Another special treat today is my very first blog GIVEAWAY!  From a list of each individual who posts a comment [see particulars at the bottom of this blog], I will draw names for a hardcover, paperback, and digital copy of my brother’s new novel.  So each person commenting has THREE chances to win a free book!
Without further ado, here’s author Charles A. Salter to give some back-story on his newly published novel:

Backstory on The eBay Plot
By Charles A. Salter
The eBay Plot is based on a true story from the era of the 9/11 terrorist attacks, one never revealed publicly until now.  At the time, I was an active-duty Army officer at the Armed Forces Radiobiology Research Institute (AFRRI) in Bethesda, Maryland, which is the primary military lab devoted to medical defense against nuclear and radiological weapons.  I was the director of the Medical Effects of Ionizing Radiation course taught world-wide on U.S. and allied bases of all military services, as well as to the Public Health Service and first responders.  Two months after terrorists destroyed the World Trade Towers in New York and also attacked the Pentagon on September 11, 2001, I and my team were invited by the director of the White House medical unit to come to the Old Executive Office building near the President’s West Wing to brief the entire medical staff on the current nuclear/radiological threats and to train them how to deal with the medical effects.
Among many threats that I discussed was one related to eBay.  Scientists at AFRRI had been screening radiation-related auctions on eBay to help prevent the spread of nuclear technology and radioactive materials among the public.  The first one that alarmed us was the sale of a radioactive radium source that we calculated to be strong enough to kill several people if used by terrorists towards that end.  The deeper we looked into online auctions related to weapons of mass destruction, the more concerned we became and ultimately turned over to the FBI the information we had gathered related to the radium auction. [I hasten to add that everything we saw was legal if purchased by scientists for legitimate purposes and not used for criminal or terrorist ends.  But how would we know unless the right authorities were informed and followed up?]
As I attended those staff meetings and examined all the numerous auctions myself, some related to biological or chemical warfare as well, I realized this was a story screaming to be written and published in book form.  For years I waited for the FBI to completely solve the mystery and connect all the dots, especially those related to the mailed anthrax attacks and the strange deaths of several key scientists who worked on medical defenses against biological warfare, but to no avail.  I finally decided to go ahead and write the first draft in 2007, sticking to the known facts as much as possible and working out a dramatized, fictional ending which tied everything together in one grand plot.  I waited years more, till 2011, before submitting the book to Tate, still hoping for the FBI investigation to produce a definitive resolution.  To date, that has not occurred, though you may remember from seeing the news over the years that the FBI had a “person of interest” and later a suspect in the anthrax case; though nothing was ever proven in court, the authorities focused on scientists from nearby Fort Detrick in Frederick, Maryland (where I also worked for years before going to AFRRI).
Perhaps the facts presented in this novel will lead to renewed interest and exposure of additional evidence which might finally solve the remaining pieces of the mystery.  And wouldn’t it be ironic if my fictionalized ending proved to be largely or even partially correct?

GIVEAWAY!
See details below for how to win one of THREE copies of The eBay Plot — one hardcover, one paperback, and one digital.

Bio Blurb:
Charles A. Salter holds five degrees, including a Ph.D. from the University of Pennsylvania and a doctorate of science from HarvardUniversity. The eBay Plot is based on Salter’s experience as an active-duty Army officer and as the director of the medical effects of ionizing radiation course at the Armed Forces Radiobiology Research Institute. 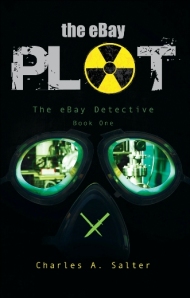 The eBay Plot
The eBay Detective Book 1
by Charles A. Salter

Louella shivered again. Lots more to sell on eBay. But never again like this. Never before darting to work in the morning. Next time she’d choose a crowded place in the middle of the day. She didn’t even know what the buyer looked like, only that he would meet her at six a.m. and would arrive in a white Lincoln Continental.
Speak of the devil.

Brad Stout is a US Army major, an expert in radiation defense at the military’s premier radiation defense lab. He is assigned to monitor sales of radioactive products on eBay in an effort to prevent terrorists from getting their hands on illicit nuclear knowledge and materials that can make dirty bombs.
Brad has been on the trail of an eBay buyer who seems to be involved in a recent murder and who is prepping to make a dirty bomb. Brad is about to bring the situation under control when the tables turn and the eBay buyer is now stalking Brad’s activity.
In this compelling dramatization of the never-before-told true story of how military scientists used eBay to help foil a developing dirty bomb plot, national security is in jeopardy. Brad picks up on the trail, but can he prevent a weapon of mass destruction in the nation’s capital before it is too late?

Giveaway!
To participate in the drawings for either a hardcover, paperback, or digital copy of The eBay Plot Vol. 1 … just enter a comment on this blog.  In your comment, be sure to include at least one phrase telling whether you’ve ever bought or sold anything on eBay.
Also include your email address, in this form:
jane3doe [at] cableco [dot] com
… so I can contact the winners.
Save a link to this blog because in a couple of days — probably Nov. 10 — I’ll announce the three winners.  [In this giveaway, have only one copy of each format, so the three winners will not likely have a choice of format.]