Not really.  Well, maybe.  I don’t know.  I have freckles (naturally) and red hair (courtesy of my hair salon).  I’ve never traced my heritage back, though I had an uncle who was doing that well before the internet made it so easy.  I’ve heard on my father’s side there’s some German but I don’t know how far back I have to go to find it, but I think I’ve heard there’s some Irish as well.  Mom’s side?  Dad’s?  But I’m all for a fun time, so I’m digging the “Kiss me, I’m Irish” slogan.

I even bought the T-shirt from Target!  (Which I cannot find to post a picture of it.)

St. Patrick’s Day is one of those fun holidays that hasn’t spread out and become too commercialized…yet.  I don’t feel the pressure from Hallmark to buy someone a St. Patrick’s Day card.  If the holiday passes and I didn’t do anything special for it, no big whoop.  I also like that it is always March 17.  Not the third Wednesday of March or something stupid like that.  (Though I wouldn’t put it past our politicians to pass some sort of law mandating it.  Morons.)  It’s a simple holiday which gave us an excuse in elementary school to fight over the green crayons, in middle school to study the history of St. Patrick, and in high school math to plot coordinates resulting in a the shape of a shamrock.  And THEN fight over the green crayons again.

I also have to admit to digging the idea of drinking green beer even though beer is not my beverage of choice.  I did have it when I spent a St. Patrick’s Day in Savannah, Georgia.  Now I know Chicago has the rep for the green river, but Savannah’s celebration can give Chicago a run for it’s money….which is also green.  I remember green beer, hanging out with a friend, and….and….something to do with green…more beer….and green beer.  Apparently, I had fun. 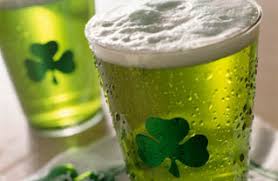 Speaking of green beer and fun…have you ever been to a writer’s conference and smack in the middle of editor and agent pitch sessions, you see a parade of leprechauns and other festively dressed folks pass through as part of a pub crawl?  Yes. Yes, I have.  I wasn’t pitching, but wish I had.  That follow up letter would have been so easy to send with the partial or full manuscript request.  I mean what editor wouldn’t remember having a leprechaun sit on her lap mid-pitch?  Not saying that happened, but I kind of wish it had as opposed to the agent who took a phone call in the middle of my pitch session.  (Definitely crossed that one off my list.)

Whether you’re Irish or not, feel free to bust out the green wig, drink green beer, and dance an Irish jig on March 17.  Happy St. Patrick’s Day!

11 Responses to Kiss Me, I’m Irish