Christmas is coming in a few days and we were asked to talk about the weirdest present we ever received. Well, that isn’t easy. I have never had much luck with presents.
My father made a decent living but one can’t say we lived up to our means. And I never got what I wanted. Seriously.
I was easy to please when little and Santa brought lots of things, shiny and new, but I learned early that there was no use asking anyone for anything as I would never get what I desired. Even if family made an effort. For instance, if it happened to be a two-part item, I’d get the part that wasn’t special to me. If I wanted something a certain size, I’d get one smaller or larger, the wrong character or somehow other than what I wanted. Just ‘off’, if I got it at all.

One aunt was like a young grandmother to us,(a second mother to my sister).She always bought us ridiculously expensive clothes for Christmas, always too big and to her taste. If they were wearable at all, my sister usually wore mine,(because it fit her.) My brother got the nerve to ask her not to give him clothes,(which he could not wear. like LOUD ski sweaters), and would ask for nice toys. She bought them, grudgingly, very grudgingly. I never wanted her to look at me the way she looked at my brother when she handed him his gifts. When my sister got older , she decided that we could exchange the clothes , but my aunt would buy at full retail in expensive stores months in advance and by the after-Christmas markdowns, we’d get a fraction of their value in return .
One year an old friend gave me a very large book on tropical fish, but my mother was the one who kept the fish, not me. It was also a book translated from Italian that explained how to capture your own tropical fish, which was not an easy thing to do in the suburbs of Washington ,DC.(I’m not all that sure it is that easy on the Mediterranean.)

I think the oddest gift may have been from another aunt .It must have been the Christmas I was 17 ,(or maybe even 18), yet she gave me finger puppets. They were handmade, imported finger puppets, but they were finger puppets, for crying out loud! I could see if I were into performing arts, but I certainly was not. I was brought up to be thankful and appreciate any gift but she kept pressing me about them. I was nice but I guess I was not jumping up and down or putting on a puppet show for everyone. (Oh, if you only knew me then! Nothing could have ever been further from my temperament.) Even my mother, who would never appear to be less than fawning over her sisters, (or any guest, for that matter), could only muster so much appreciation for them. That aunt realized how ill-suited to me the  gift was and a week later I received a box from one of the nicer department stores in the area. In it was a wonderful dress, one that I never would have bought for myself. It was scoop-necked and rather short, but you bet I wore it. I even wore it to the Kennedy Center to see a performance by a troop from La Scala a few years later. Hey, I was young and it was a matinee! (I went with the other aunt; we had a box.)
I finally parted with the dress a few years ago. It would not ever have fitted again size-wise or in age-appropriateness, but it was still in incredible condition and of such classic lines, it never went out of style. I hope someone wore it again; it deserved a good time again.

Anyone have something to add? I have gotten odd gifts at other times, but not so much for Christmas.
I won’t be back until after Christmas. I wish all of you a safe, healthy, happy, peace-filled Christmas ,(or whatever holidays you care to celebrate). 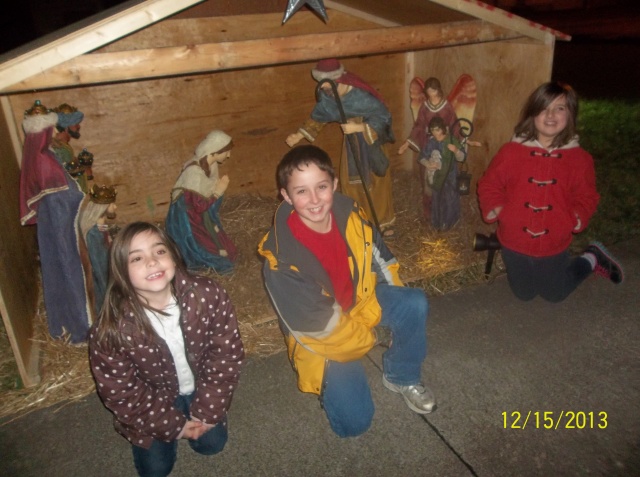 Tonette’s Grandchildren wishing you and yours the happiest of holidays!

Tonette was a once-fledgling lyricists-bookkeeper, turned cook/baker/restaurateur and is now exploring different writing venues,(with a stage play recently completed). She has had poetry and nonfiction articles published in the last few years. Tonette has been married to her only serious boyfriend for more than thirty years and she is, as one person described her, family-oriented almost to a fault. Never mind how others have described her, she is,(shall we say), a sometime traditionalist of eclectic tastes.She has another blog : "Tonette Joyce:Food,Friends,Family" here at WordPress.She and guests share tips and recipes for easy entertaining and helps people to be ready for almost anything.
View all posts by Tonette Joyce →
This entry was posted in childhood, Family, Friendship, Holiday, Tonette Joyce, youth and tagged Christmas clothes, Christmas gifts, clothes, Finger puppets, La Scala, The Kennedy Center. Bookmark the permalink.

12 Responses to I’m Your Puppet