A novel in the Somerset Series

Everyone has secrets… some just hold theirs tighter.
—
Cold secrets are finally warming up… and Kelly can feel the heat.

Kelly is haunted by the mysterious involvement of her landlord’s ancestor with a wounded soldier in 1863, while her boyfriend researches the unsolved murder of an unidentified horseman in that same Kentucky community a few years after the Civil War. As Kelly and Mitch assist each other’s research, tantalizing discoveries seem to connect their subjects. 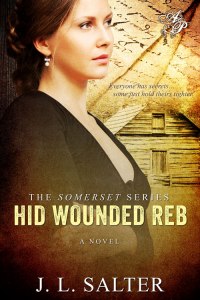 Kelly’s initial assignment is to research the cemetery which started 144 years ago with the death of a battle-wounded Rebel hidden briefly in the Butler family cabin. But the actual facts are clouded with hazy family legends, including possible involvement of a second soldier — the dead man’s cavalry buddy. Mitch’s belated study of the stranger murdered at the church yard has also hit baffling snags.

When surprising old documents surface and rekindle fading memories, the uncovered secrets could help solve both cold cases. But those investigations are hampered when Kelly harbors a terrified girl (with her own complicated secrets) who brings danger close behind.

The exciting prequel to “Called to Arms Again”