This is a “free” week here at Four Foxes, One Hound but I have been busy all week. I was stuck for a topic until I took a moment to grab a book from a bag that was handed to me from my niece, who is the reason, in a roundabout way, that I am here writing with you today. But that’s a long story.

What I decided to do today is vent about writers getting it wrong. I know I have gone into this subject before , but last night’s book had a couple of examples, last month’s books had a few; it goes on.

When I was in grade school we had to re-tell a folk tale. My mother told me one that her father had brought with him from Italy, which I related:
An artist did a painting of a man. He left it in the street and hid, so that he could hear the honest opinions of passers-by. A shoemaker came by and exclaimed, “What a wonderful painting! It would be perfect, except for the shoes; the heel is too high.” And he went on his way. The artist had his paints with him, so he fixed the shoes on the painting. When the shoemaker passed again on his way back home, he said, “Oh, now the shoes are perfect! But the collar of the man’s coat is too wide.” The artist came out from his hiding place and said, “Shoemaker, stick to your last!” Meaning: you should only give an opinion on what you really know. Writers should only write what they know.

I don’t mean ‘have experienced’. I have written about murder, which Heaven knows I have never committed, (not yet, anyway). We would never have Star Wars, Middle Earth or The Wizarding World without talented writers and their fantastic imaginations, but when it comes to the real world, writers need to do their homework.

The book that I started last night is by a very  famous and prolific author. In this particular novel he offers his rendition of a young female college student’s work. It reads fairly sophisticated in parts and down-right juvenile in others. It sounds like an adult male mixed with a young teen boy who is showing off. He simply doesn’t have the ‘voice’ right for a young woman at all. I will try to finish the book, but the mistakes are bothering me. He said that someone was wearing purple, “Or maybe it was eggplant or periwinkle, some such hue.” Eggplant or periwinkle? They are nowhere near each other: 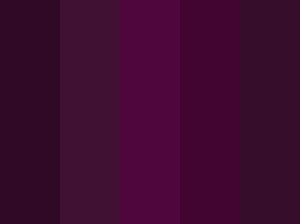 This is the color “Eggplant”

This is the color “Periwinkle”

Maybe he was trying to show that he didn’t really pay attention to the names of colors, but  it was strange that he  could name unusual ones. Would anyone who didn’t know colors come up with periwinkle?

Daphne Du Maurier, the early 20th century novelist, was great in my opinion, but she could not write an American well. She had them say things like “It’s off to bed for us now”, and “We shan’t be there”.

Most authors these days would never dream of writing African-American speech as many had done in previous times. If you have ever read a Bobbsey Twins book, you have probably read a modernized version. They cleaned-up the way the cook and her husband were originally portrayed, especially in their speech. It was bigotry at its worst. Yet today, many have no problem disparaging Irish people. They throw around phrases they think are typical to them, (us), with dirty talk and drunken slurs and make downright ugly caricatures. The same for Italian-Americans, who really seem to get it, even from their, (our), own kind. The term “Pastatutes” has been used to describe those of Italian extraction who will perpetrate ugly Italian stereotypes for monetary gain. Most writers are not Italian think but they know that Italian-Americans think like, talk like and act like the Sopranos and the gang of The Jersey Shore. They don’t. My mother’s family doesn’t. No others that I have known do. Writers need to talk to real people other than their own kind and not “research” by watching… well, pastatutes.  Shouldn’t they accept their limitations and really listen to those whose ‘voices’ they wish to portray?

The newest installment of a New York Times Best-Selling series has a character upset after being called an “African-American” because she claims that people are stupid, since her family came from a Caribbean nation .Gee, I hate to tell her that the people of the islands who can be mistaken for African –Americans indeed have roots in Africa. Most of their ancestors were taken from there to the islands against their will in the slave trade, although people of many nations have helped to populate the Caribbean. The aboriginal people of the Caribbean were the people who Christopher Columbus dubbed “Indians”, (Indians of the New World or Native Americans), and most were killed off or died from European diseases. The author should have searched a just little farther back in history.

One book I read last month is the work of a writer who is not from Kentucky. I don’t know if she has ever been in Kentucky, but I can tell you, she apparently has never been to Bardstown, where I have lived for over twenty years. In her cozy mystery she speaks of a woman philanthropist who, among other good deeds, endowed a school in Bardstown,Kentucky with a garden. Bardstown has been named The Most Beautiful Small Town in America by Rand McNally and U.S.A. Today. Its schools are beautifully landscaped. In fact, the county high school’s Future Farmers of America have a hot house and sell seedlings. Stella D’Oro lilies are the town’s official flowers and they are everywhere, including the school grounds, along with many, many flowering plants , trees and bushes. It is an American “Tree City” and you better have a permit to cut down any tree in town; the people here love all plants. This was mostly a farming community and many citizens still have families with land where they garden, if they don’t have gardens or  their own yards. The Motherhouse of the Sisters of Nazareth is here and their senior apartment complex has land set aside for any resident who wants to garden. The famous Monastery of Gethsemane* is nearby; they farm and garden there as well. No one needs to donate for any type of garden here. The author had anywhere else to choose from, but for some unknown reason, she chose to use Bardstown. She chose poorly.

[* The Monastery of Gethsemane is best known for its most famous resident, Thomas Merton, who is buried there.They also make pretty potent fruitcake and bourbon fudge which they ship around the  world.]

It isn’t just novels, it’s music and film. The late, great Eddie Rabbit blew it when he wrote “Rocky Mountain Music”. It is very “Appalachian” sounding and contains the phrase “next to a swamp full of toads.” There are no swamps in the Rocky Mountains; he had never been there. Relatedly, in “The Blues Brothers” movie, they take the band’s place that is supposed to play at a bar. When they ask what kind of music they like, the barmaid says, “Both kinds; Country AND Western”…it’s good for a laugh, but there is a difference.

In the movie “Shining Through” ( a much-panned film, but I like it), a Nazi officer tells the spy who is posing as a governess that “Von Karajan is playing Wagner as a celebration of our courage” and wants to take her to see the concert. But when we see them at the symphony, the conductor is an elderly man with white hair. During World War II, Herbert Von Karajan would have been in his 30’s. The same man wrote and directed the movie. The buck stops there.

These are just a few glaring examples. Just a little, tiny bit of research or just listening would have stopped most of these mistakes. These are not obscure facts, but simply examples of writers not doing  easy research, making any effort. I’m not saying that every detail must be perfect, but if it is something simple or obvious, easily caught by a casual reader, don’t you think the lack of attention is an insult to the reader?

Are you bothered by a writer’s laziness or perhaps, over-extension?

Tonette was a once-fledgling lyricists-bookkeeper, turned cook/baker/restaurateur and is now exploring different writing venues,(with a stage play recently completed). She has had poetry and nonfiction articles published in the last few years. Tonette has been married to her only serious boyfriend for more than thirty years and she is, as one person described her, family-oriented almost to a fault. Never mind how others have described her, she is,(shall we say), a sometime traditionalist of eclectic tastes.She has another blog : "Tonette Joyce:Food,Friends,Family" here at WordPress.She and guests share tips and recipes for easy entertaining and helps people to be ready for almost anything.
View all posts by Tonette Joyce →
This entry was posted in authors, Books, Family, inspiration, movies, Random thoughts, Tonette Joyce, writing and tagged "Pastatutes", Bardstown, Caribbean islanders, Country and Western Music, Daphne DuMaurier, Eddie Rabbit, Gesthesmane Monastery, Herbert Von Karajan, KY, Middle Earth, Rand McNally, Richard Wagner, Shining Through, Sisters of Nazareth, Star Wars, The Blues Brothers, The Bobbsey Twins, the color 'eggplant', the color 'periwnkle', The Most Beautiful Small Town in America, The Sopranos. The Jersey Shore, The Wizarding World, Thomas Merton, U.S.A. Today, World War II. Bookmark the permalink.