Posted on November 3, 2014 by Patricia Kiyono

This week my choices are to have a guest author, review a book, or interview someone. I decided to feature someone who I consider to be a fabulous author, because she actually got me to read a genre that I’d never liked before. I first “met” S. G. Rogers through the Astraea Press social networks. She wrote a wildly popular book called The Last Great Wizard of Yden and I was amazed at her business savvy as well as her genuine willingness to help us newbies in the writing game. I didn’t read that book (someday I WILL rectify that!) but we featured each other on our blogs, liked each other on Facebook and all the other social media outlets. But since I don’t read paranormal or fantasy, I didn’t read the books I helped her promote.

It wasn’t until she released a novella called The Magical Misperception of Meridian that I finally discovered the fantastic worlds S. G. Rogers creates. What a wonderful book! It was like a fairy tale, only more real. The characters were a lot more like real people than cardboard cutouts, and they had their quirks and flaws. I went back and read another of her stories, Minna and the Valentine, and was equally charmed. I now have TEN S. G. Rogers books on my ipad, and when Larken came out a few weeks ago I immediately got a copy. But with my own writing deadlines and promo duties I wasn’t able to start reading it until last Friday after the trick-or-treaters had gone back to their homes and I turned the front porch lights out.

What a wonderful story! This is not a paranormal or fantasy, it’s a beautiful historical romance, and S. G. is just as skilled at this genre as she is at writing fantasy. There was that sense of whimsy I’ve found in her other books, but added to this were enough twists and turns to satisfy a mystery lover and enough angst and resolution to wet the tissues of a romance lover. I am a fan for life.

Anyway, I contacted S. G. and asked her if she’d care to share with us about Larken, and she very graciously agreed. So please welcome S. G. Rogers, author extraordinaire!

Bits and Pieces of Inspiration

What does a horrific train crash have in common with Jane Eyre, Sense and Sensibility, or The Perils of Pauline? Bits and pieces of each found their way into my latest Victorian romance, Larken.

In Larken, the heroine, then fourteen, survives a horrific train crash that kills everyone on board, including her parents. The accident was inspired by the Staplehurst rail crash of 1865, which took the lives of ten passengers and injured forty more. Author Charles Dickens was on board, and although he survived, emotionally he was never the same. Similarly, Larken is left with scars, both emotional and physical, and thereafter becomes prey for unscrupulous foster parents.

Before she’s sent to her foster parents, Larken spends several months at a girls’ orphanage. This is where Jane Eyre inspires. Although Larken’s time at the orphanage is not quite so bad as Jane Eyre’s Lowood, School, the formerly privileged young woman witnesses real deprivation and desperation for the first time in her life. What Larken sees at the orphanage shapes her decisions years later.

Thereafter sent to live with foster parents, Larken’s assets are looted by people who are tasked with protecting her—a similar theme in Sense and Sensibility. In Sense and Sensibility, John Dashwood is morally obliged to take care of his father’s second family, but he’s easily convinced otherwise. In Larken, foster mother Mrs. Howley steals everything of Larken’s she can get her hands on, leaving the young woman with little choice but to take the first offer of marriage that comes her way…as a mail-order bride to Mr. Brandon King. 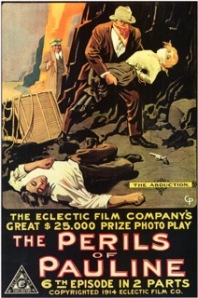 If all this seems a bit melodramatic, it’s intentional. Wikipedia defines melodrama thusly: A melodrama is a dramatic work that exaggerates plot and characters in order to appeal to the emotions, often with strongly stereotyped characters. Like the melodramas of a former age (ie: The Perils of Pauline), I wanted to write something with a damsel in distress, who is placed in perilous circumstances. Unlike an ordinary melodrama, however, Larken is no shrinking violet! No spoilers here, but the latter part of the story involves a somewhat melodramatic twist inspired by these melodramas or perhaps 19th century penny dreadfuls.

I hope you’re “inspired” to read Larken! It was jolly good fun to write. ~ S.G. Rogers 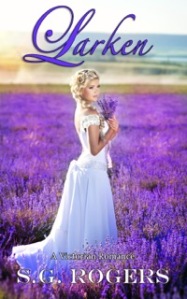 The sole survivor of a train accident, young Larken Burke is dubbed the Miracle Orphan. Four years later, however, her life is far from fortunate. Because of her emotional and physical scars, she believes she’s un-marriageable. With little hope for the future, she agrees to wed a gentleman she’s never met. Unfortunately, his aloof manner proves difficult to take.

Marked by romantic tragedy and the loss of his brother, Brandon King has forsworn marriage. Obliged to take in a ward, he advertises for a mail-order bride to raise the boy. Since the union is to be a marriage in name only, his criteria are youthful age, a certain level of intellect, good breeding, and that the girl shouldn’t be so ill-favored she would embarrass him in society. To his dismay, he gets more than he’d bargained for.

Will it take a miracle for Mr. and Mrs. King to fall in love, or is their marriage another accident waiting to happen?

During her first career, Patricia Kiyono taught elementary music, computer classes, elementary classrooms, and junior high social studies. She now teaches music education at the university level. She lives in southwest Michigan with her husband, not far from her five children, nine grandchildren (so far), and great-granddaughters. Current interests, aside from writing, include sewing, crocheting, scrapbooking, and music. A love of travel and an interest in faraway people inspires her to create stories about different cultures. Check out her sweet historical contemporary romances at her Amazon author page: http://www.amazon.com/Patricia-Kiyono/e/B0067PSM5C/
View all posts by Patricia Kiyono →
This entry was posted in Guest Blogs, Patricia Kiyono and tagged book review, Guest post, historical romance, Larken, Patricia Kiyono, S. G. Rogers. Bookmark the permalink.

12 Responses to Bits and Pieces from S. G. Rogers