They Captured My Childhood Imagination

Characters and books I enjoyed as a child

This week, we revisit characters and books which captured our imaginations when we were kids. I had many characters I adored — some real people and some fictional.

It would be difficult to leave out Superman, whom I watched religiously on TV and whom I emulated by tying a towel around my neck and leaping from the swing set. And of course I read about my hero in his numerous comic book adventures.

Tarzan was another early hero. And, yes, I swung on “vines” and pretended to have a pet chimp (our dog) whom we called Cheetah. If I told you I also auditioned a loin cloth, that would be “too much information”… so I won’t mention it.

Certainly Davy Crockett was a biggie. The Walt Disney empire had launched Fess Parker as the embodiment of that real-life, larger-than-life individual… and I ate it all up. I had a coonskin cap, my big brother had a DC rifle, and we each had a “buckskin” costume (cloth) replete with vinyl fringe. Disney ran TV-movies in 3 part episodes on his Sunday night show and I watched them all. Some were released to theaters and I viewed those. And, of course, a feature film was made of Fess Parker fighting the battle of the Alamo… and I was there for the whole shebang.

Superman, Tarzan, and Davy C. were chiefly products of the mid-50s but I stuck with then as long as they were available. They were accompanied by nearly any strong, silent, shooting, horse-riding hero of the movie and TV westerns.

Though I never lost my affinity for these characters, I found myself in a subtle shift as I was in fourth and fifth grades. I started reading biographies of real-life historical folks. I referred to that biographical series as the “cloud” books. 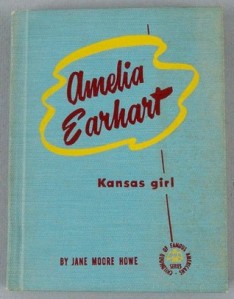 ‘Cloud’ Books
Beginning in the 1940s (before my time), the Bobbs-Merrill Company published a series called Childhood of Famous Americans. They were biographical treatments, but instead of focusing on the subjects’ notable adult achievements and providing brief back-story of their younger years, these books merely mentioned their mature accomplishments and spent probably 80% of the pages detailing their childhoods. [Similar to Paul Harvey’s “the rest of the story” radio series — we learn which childhood experiences shaped a famous person’s later years.]

Were these treatments 100% fact? Uh, no. Some built on unsubstantiated legends and nearly all the youthful dialog was likely fabricated. But these books did capture the essence of those young people… and that’s what I enjoyed reading. Some of those pre-fame kids seemed a lot like ME.

There were probably about 250 titles in the series at the time I was immersed… and I read nearly every one in our school and public libraries. Just now looking over an updated list of titles, I recognized nearly six dozen that I read… mainly in 4th and 5th grades.

I called them cloud books because of their distinctive covers. In later years, the covers changed, of course, but the inspiring content was the same.

It was fascinating to see the world (those very different time periods) through the young eyes of people who later became famous. The realization that nearly all of those celebrated individuals were born / raised in very ordinary circumstances affirmed a sense that I, too, could achieve wonderful things. If I put my mind to it and invested the requisite time and labor, I could be an inventor, athlete, statesman, explorer, or… yes, even a writer!

What books and/or characters made a big impact on YOU, as a child?

17 Responses to They Captured My Childhood Imagination