And They All Lived…Together, Apart, or Not At All?

For this week’s topic, one of the foxes asked, “Do you prefer Happily Ever After endings or Happy For Now… and how about Tragic Endings?” 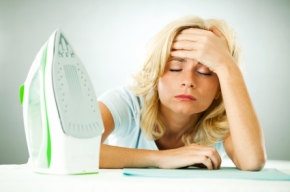 As a romance writer, my definite go-to is HEA. I think that stems from my experience with reading romances. I didn’t start reading them until I was a super-busy working mom. Ever since I was in grade school I’ve had trouble turning my brain off and going to sleep. When children came along and my responsibilities multiplied, there were so many details to attend to, so many things to worry about, and when I’d fall into bed I would always remember one more thing that should have been done. (Actually, I still struggle with this, but now that I’m retired it’s not always crucial for me to be well-rested in the morning.) 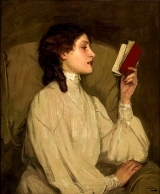 There’s no better way to end the day than relaxing with a good book!

I found one way to deal with my insomnia was to read. I discovered paperback romances at my local library while my daughters were there for story time. I read one, got engrossed in the heroine’s struggle, and rejoiced with her happy ending. And then I slept. Soundly. I read another one the next night and enjoyed another good night’s sleep. On nights I didn’t read I didn’t sleep well. The next week I went back and signed out several more paperbacks to last the whole week, and by the end of the month I’d rearranged my weekly schedule so that on weeknights I had at least a couple of hours at the end of the day to read.

Of course, I wasn’t able to read every night, but I found that on nights I couldn’t read it was easier for me to relax and go to sleep when I thought about a book I’d read previously. It finally dawned on me that what helped to me sleep was the emotional journey of the main characters: they had a conflict, dealt with it, and by the end of the book all was well. That feeling of being able to let go of a major problem is what allowed me to empty my mind enough to let go of the current day and re-charge for the next one. 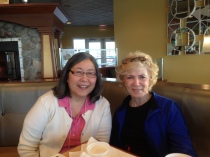 Later on, after I started writing, I wanted to emulate those stories that helped me get through that challenging period of my life. Inside one of the paperbacks was a note about the author, Rita Clay Estrada, and her organization called Romance Writers of America. I went online and found a local chapter and started attending meetings. And I started plotting out stories where the hero and heroine always end up together. I also continued to read – and found out there are many types of romances.

I learned not every book has to end with a wedding or even a promise of one. There are books labeled “Happily For Now” (HFN) in which the protagonists end up as a romantic couple, but no mention is made of a permanent relationship. In one book I read the two people live on opposite ends of the country and they’re satisfied with that. They did make it through whatever major conflict they had to deal with, but they don’t actually end up married or even engaged. I admit I was disappointed with that ending, even though I know this happens in real life. It didn’t have the kind of resolution that helped me let go of the day’s concerns and relax. 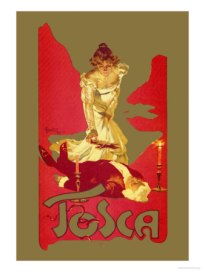 As for tragic endings, I tend to avoid them. There are several movies I haven’t watched because I know they end badly. The exception to this would be when I watch tragic operas – last week I went to a production of Tosca, and while the musical performance was wonderful, the rather depressing storyline didn’t affect me the way that movies like Ghost and Love Story did. Maybe it’s because I was listening to the performance rather than watching and getting wrapped up in the plot. I found Romeo and Juliet more heartbreaking than West Side Story, even though they’re basically the same tale. But maybe that’s the musician in me. When hubby has the TV on I can tune it out – until someone starts singing!

As a reader, do you have a preference for how the stories end?

During her first career, Patricia Kiyono taught elementary music, computer classes, elementary classrooms, and junior high social studies. She now teaches music education at the university level. She lives in southwest Michigan with her husband, not far from her five children, nine grandchildren (so far), and great-granddaughters. Current interests, aside from writing, include sewing, crocheting, scrapbooking, and music. A love of travel and an interest in faraway people inspires her to create stories about different cultures. Check out her sweet historical contemporary romances at her Amazon author page: http://www.amazon.com/Patricia-Kiyono/e/B0067PSM5C/
View all posts by Patricia Kiyono →
This entry was posted in Patricia Kiyono, reading preferences and tagged HEA, HFN, opera, Reading choices, romances, Sleep aids, Tragedy. Bookmark the permalink.

14 Responses to And They All Lived…Together, Apart, or Not At All?