This is another free week, and one of the things I’ve been working on lately is assisting one of the Eskape Press authors with her release party. Since school is out for the summer I had some extra time so I offered to read her historical romance and review it. I was enchanted by this story of a Confederate widow coming to terms with her devastating loss and a Union family living in Tennessee scrambling to make ends meet during the tumultuous years of the Reconstruction. I’ll be offering a review on my own blog later on, but I invited Mysti to come and tell us a bit about how she came to write A Time for Everything. Here she is!

When I first began writing A Time for Everything back in 2010, I also enrolled in a writing class at Gotham Writers Workshop. This was my first attempt at a historical romance. I had waded into uncharted waters and had yet to commit myself to the amount of research needed for this story.

The framework of the plot was there and strong enough to build upon. Confederate widow meets Union veteran after the Civil War and both must overcome differences and social hurdles in order to fall in love. Supporting characters included African Americans as both former slaves and those who had always been free. Our villain was a former slave owner. The characters, I thought, were solid enough to turn into memorable personalities. So I decided to use parts of the draft in this class to see what I could improve upon.

The class was too expensive, but at least I learned a few things. To this day, I remember one important piece of feedback from a classmate: “Don’t whitewash history.”

rap my head around why he would say that. I’d avoided the use of racial slurs. I’d put the former slaves on equal ground with their white neighbors, shaking hands and chatting it up like I’d do with any of my friends of color today. Wouldn’t readers get mad at me if I wrote the “n” word and portrayed racism in its hateful reality? What did I, a middle-class white woman in the 21st century, know about the struggle of black Americans to rise out of bondage to find their place in a free world that hated them? What right did I have to portray those ugly truths as they happened?

Then it clicked. What right did I have to NOT portray it accurately? Even a historical fiction novel must have a basis in truth for it to feel real. Perhaps the real reason I had avoided writing the negative was that it made me uncomfortable. I can’t feel guilty about slavery on a personal level because our generation cannot change the past. I don’t believe any of my ancestors ever owned slaves either, but I didn’t feel worthy to write it as it happened because I’ve never lived under the shadow of racism myself.

That’s when I decided to put the story aside until I had the skills, time, and courage to do it justice. In the fall of 2013, after I’d gotten three other books under my belt, I felt inspired to rewrite it for NaNoWriMo, a month-long writing marathon in the month of November. In 30 days, writers all over the world are challenged to write 50,000 words in a novel. I really doubted myself. For one, could I even accomplish that goal, and two, could I finally make this story into something I was proud of? I had gathered a lot of research, both from prior material and new, so I jumped into the fray. 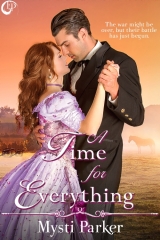 By the end of November, I had 50,000 words and then some. I kept writing. By the end of winter, I had a 100,000 word manuscript. I spent spring of 2014 polishing it up. I didn’t “whitewash” anything. I portrayed the events as they would have likely played out. In the end, A Time for Everything included a heart-wrenching, timeless love story in the midst of a very tumultuous time in our nation’s history. The knitting together of our country’s frayed divisions wasn’t pretty. Blacks were by no means on equal ground with whites. They were still the victims of exploitation and violence. Veterans lost limbs and livelihoods and came home as prisoners to drug addiction. Desperate times led to desperate measures, and I didn’t pull the curtain over any of it.

To my relief, beta readers and others I polled for the most part agreed that I had done the right thing in my approach. To hide any of the ugly truths under a blanket of obliviousness wouldn’t be respectful to the memories of the men, women, and children who died for the dream of a united nation. And it wouldn’t honor those who still fight for that dream today.

Thanks, Mysti! I have to agree with Mysti’s beta readers. Mysti’s book is wonderful. You can find it at Amazon, Barnes and Noble, Smashwords, iTunes, and other ebook outlets.

During her first career, Patricia Kiyono taught elementary music, computer classes, elementary classrooms, and junior high social studies. She now teaches music education at the university level. She lives in southwest Michigan with her husband, not far from her five children, nine grandchildren (so far), and great-granddaughters. Current interests, aside from writing, include sewing, crocheting, scrapbooking, and music. A love of travel and an interest in faraway people inspires her to create stories about different cultures. Check out her sweet historical contemporary romances at her Amazon author page: http://www.amazon.com/Patricia-Kiyono/e/B0067PSM5C/
View all posts by Patricia Kiyono →
This entry was posted in Guest author, Patricia Kiyono and tagged A Time for Everything, Civil War, Eskape Press, Gotham Writers Workshop, guest author, historical romance, Mysti Parker, Nanowrimo, racism, Reconstruction. Bookmark the permalink.