I don’t wear much jewelry, so when I saw this week’s topic was “Use a piece of jewelry for inspiration” I was stumped. I don’t wear rings or earrings, and I have three necklaces I wear when I want to feel like dressing up. I have a few teacher pins and necklaces I got as Christmas gifts from my students, but those haven’t seen the light of day since I retired ten years ago. 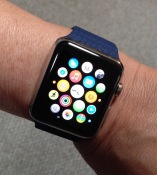 I had no idea what to do until my watch tapped me on the wrist. I have one of those new-fangled watches that doubles as a smart phone. My dear hubby, knowing that I like to dabble in techie stuff, got it for me this spring as soon as it became available. He doesn’t like to shop, so a few years ago he came up with the brilliant plan of getting me something big and telling me it counts as my gift for our anniversary, Mother’s Day, my birthday, and Christmas. My watch is this year’s gift.

I’m still learning a lot of the ins and outs, but it’s a fun toy. I like being able to see what time it is without taking out my phone or looking for a clock. I like being able to answer my cell phone without having to look for it or having to dig it out of my purse. I can delete a lot of my junk emails as soon as they come, because I get a tap on the wrist whenever one arrives. I can time my writing sprints because it has a stopwatch. I can check my calendar, read and send texts, and calculate how many calories I’ve burned on my walk from the car to the restaurant. And when I set the GPS on my phone the directions are transferred to my watch, which taps me on my wrist when it’s time to turn.

When I first saw advertisements for this watch I immediately thought of the old Dick Tracy comics. I can picture a fedora-wearing gumshoe who wears and uses a watch like mine (the larger male version, of course) to juggle the many tasks he needs to accomplish in solving his cases. The watch was a gift from a very grateful female client…I’d imagine there’s quite a backstory in that…

Joe Findit sat back in his ergonomic desk chair and sighed. He lifted his left wrist and spoke to his watch, which presently acted as his phone.

Lilly Loveme had called, asking him to find her beloved poodle, Pookie. There would be a generous tip if the dog was returned to her by the end of the day. He really didn’t like taking missing pet cases, but the client was wealthy, not to mention beautiful and generous with her … benefits to those who did her bidding. The smart watch he wore had been one of her previous tips.

“I can’t imagine where he’s gone. He leaped out of his favorite Gucci bag and scampered off,” she whined.

“Didn’t you get one of those GPS collars for him?”

“Yes, but I don’t know how to use it. That’s why I emailed the website login and password to you.”

He rolled his eyes, thankful Lilly couldn’t see him. “Right. I’ll have to find that message.” He tapped his watch to bring up his email and found the information he needed.

“Text it to me so I can show them around.”

A few seconds later a tap on his wrist alerted him to the fact that he’d received the promised pictures.

He booted up his computer and entered the password and gawked when the map came into focus – the blinking cursor showed the dog was right down the street at Bob’s Bar and Grill. He tapped his watch to bring up his contacts then tapped again to call Bob. This new-fangled phone watch sure saved a lot of time.

Bob answered on the second ring. “Yeah, what is it, Joe?”

“Do you see a white poodle wandering around? His GPS tracker says he’s there.”

“If it’s not a service dog, it had better not be in here.”

“What about in the alley in back?”

There was a pause, and he wondered if his friend had hung up. But then he heard footsteps and then a door creaking open. “Nope. No poodle in the back.”

“Hey, thanks for looking.” Joe lifted his finger to disconnect.

“Wait a second.” There was a grunt from the not-so-in-shape Bob and then, “I think the dog ditched his collar. This is one pricey piece of leather – diamond studs spell out ‘Pookie’ and there’s a blinking pendant hanging from it.”

Joe groaned. “Thanks, Bob. Looks like Sal and I are gonna have to look for Lilly’s dog the old fashioned way.”

He disconnected then looked around for his assistant. Where in blazes was he? With two of them looking they could cover more ground.

“How do you know? And how did you find him so fast?”

“Easy. I went outside and yelled, ‘Hey Pookie’ and whistled. He came running.”

During her first career, Patricia Kiyono taught elementary music, computer classes, elementary classrooms, and junior high social studies. She now teaches music education at the university level. She lives in southwest Michigan with her husband, not far from her five children, nine grandchildren (so far), and great-granddaughters. Current interests, aside from writing, include sewing, crocheting, scrapbooking, and music. A love of travel and an interest in faraway people inspires her to create stories about different cultures. Check out her sweet historical contemporary romances at her Amazon author page: http://www.amazon.com/Patricia-Kiyono/e/B0067PSM5C/
View all posts by Patricia Kiyono →
This entry was posted in Patricia Kiyono and tagged detective, Dick Tracy, Flash fiction, gumshoe, jewelry, smart watch. Bookmark the permalink.

13 Responses to Watch the Watch