October is a Spooky Month

This month, my spooky novel, “The Ghostess & MISTER Muir” will be one year old! Happy birthday to my affectionate homage to the wonderful 1947 film, “The Ghost and Mrs. Muir.”

My story is a very different tale but I took considerable delight in re-purposing most of the names of people and places from the film. I believe anyone who enjoyed the film (or even the TV series of the same name) will appreciate my novel.

It takes only one haunting for Levi Muir to become entranced with the beautiful ghostess. By @AuthorJLSalter 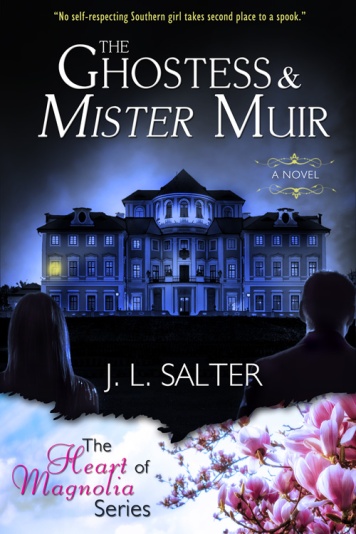 Though he doesn’t even believe in spirits, it takes only one haunting for Levi Muir to become entranced with the beautiful ghostess.

A young veteran recovering from a wrecked relationship, Muir moves to Magnolia for his first year teaching high school English and resides in the renovated old hotel, which everyone knows is haunted.

Despite his skepticism, Muir senses a presence, then smells a unique perfume. Later, he locates an old portrait of beautiful Danielle Gregg, who lived in that suite a century ago, but experienced a tragic death.

His lovely new colleague, Lucy – science teacher and dedicated Spirit-Chaser – tries to convince Muir that the supernatural is real… and not to be taken lightly. Though Muir has been attracted to Lucy since the first day he spotted her, something begins to jam his thoughts whenever she enters his mind.

Intrigued by the beauty and sensuality of the mysterious woman in the portrait, Muir tries to learn more about the ghostess and her untimely demise. Though still skeptical of ghosts and hauntings, Muir can’t shake the feeling there could be more to Danielle’s mysterious 1914 death than the locals believe.

The more Muir encounters the lovely ghostess, the stronger his desire for even more contact! But Lucy’s willing to fight for Levi’s heart, because no self-respecting Southern girl takes second place to a spook.

Question:
Do YOU enjoy stories that are slightly spooky?

8 Responses to October is a Spooky Month