Today I have the great pleasure of having as my guest Kate Collins, who writes the wonderful “Flower Shop Mysteries”. The mysteries are good, the writing witty, the characters well-developed and there is plenty of clean romance.Author Kate Collins

Welcome, Kate!
The first obvious question is, why a flower shop for your setting?

: When I was first developing the idea for this series, my then editor suggested a setting women would enjoy. My initial reaction was, “Hey, I’m a woman! And I love flowers!” I ran the idea of a gardening series through my mind, but then the image of Bloomers Flower Shop sprang up in my mind, as did the character of Abby Knight, my feisty little redheaded knight in shining armor. When ideas present themselves like that, I feel they’re divinely inspired, so I go for them. 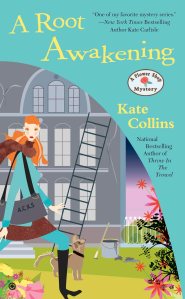 You can’t get a more romantic setting than a flower shop! Your main character, Abigail Knight, was dumped her rich fiancé, Pryce, when his parents no longer approved of her when she dropped out of law school. She cannot ignore him or his family, since her close cousin, Jillian, married Pryce’s brother, so there is a great deal of romantic tension. Enter into her life the attractive Marco, a former police officer who owns a bar and becomes a detective. I won’t put in any more spoilers, but can you give us some insight into how you decided on your storyline?

: Honestly, I can’t tell you how exactly because the storyline kind of presented itself to me. I had originally planned to have Abby be a newly graduated law student, but nothing was coming to me after that. In a word, it was BORING. It wasn’t until I changed the plan to having her booted out of school for low grades that my creative juices started flowing. She’s the underdog – the only one of her family who hasn’t become a success. She returns to the little flower shop where she worked during summers in college, and everything unfolded from there – the prissy fiancé and his snobbish family, the hunky former Army Ranger/bar owner who steps in to help her solve her first case, Jillian, the zany cousin who everyone loves to hate, and her wonderful staff at Bloomers. They truly just showed up when I needed them.
Jillian was only going to be in SLAY IT WITH FLOWERS, and DEARLY DEPOTTED, #2 & 3, as a ditzy bride-to-be, someone who says what she thinks with no filters. We all have a Jillian in our lives. But she was so much fun to write, and the fans reacted so positively to her, that I kept her in as comic relief. Along with Abby’s growth over the course of the series, we see Jillian’s growth, too, but always in a humorous way. If a scene starts to drag, all I say to myself is, “And then the doorbell rang. It was Jillian.” And something funny will happen.

Did you expect to publish 18 of the series, (and I hope, more to come)?

: Never, never, did I think the series would take off like it has. I’m starting #19 now (and am on a new title hunt – ACK!). When I was writing book #5, I was told most series died after that number. So when I hit #8, I got really worried and began the search for a new series idea. I ran them by my editor and got a thumbs down. She finally said, “Stop! Your books are selling. Just concentrate on them.” So that’s what I’ve done.

Your characters are usually so likeable and your mysteries great, yet you include a great deal of romance and romantic tension in your books. Why did you make romance so important in your storylines?

: I always see characters as fully developed people. They have histories, peeves, likes, dislikes, and relationships. That’s just normal. To have a whole series revolve around a young woman without having some kind of emotional relationship isn’t normal. My characters are shown with warts and all, so Abby and Marco suffer the same problems every couple does. About the fifth or sixth book, it looks like they will part ways. Holy cow, did I get fan letters! “If you take Marco out, I will never read another book!” was the common theme. I had to assure everyone that I loved Marco, too. I just try to keep it real.

Cozy mysteries are known for titles to be a play on words. Some authors really stretch for a pun, but yours are the absolute best! [Mum’s the Word, Shoots to Kill, Evil in Carnations, A Rose From the Dead.] I could list them all. Are they all your ideas?

: Seventeen out of eighteen are. Two of my favorites are SLEEPING WITH ANEMONE and FLORIST GRUMP (Oct 27th this year!!) For the one I missed, I searched high and low to find the perfect title for my vampire spoof book but nothing was working that was both funny and murderous AND contained a plant reference. My editor finally suggested, NIGHT OF THE LIVING DANDELION. I grabbed it.

Can you see yourself writing another series or in another genre?

: The Flower Shop Mystery series have been optioned for TV movies on the Hallmark Mystery channel, and they are starting with MUM’S THE WORD, the first book in the series, with more to come in 2016. I am beyond thrilled. To see my words and my characters come to life is a longtime dream. I will be posting more information about the movies on Facebook as soon as I can release that information. Stay tuned!

How can our readers learn more about you and your work?

Thank you for your time, Kate Collins!

And thank you, Tonette, for the opportunity

Well,I am thrilled for Kate’s “Hallmark” news and I think we all wish her the best!

Tonette was a once-fledgling lyricists-bookkeeper, turned cook/baker/restaurateur and is now exploring different writing venues,(with a stage play recently completed). She has had poetry and nonfiction articles published in the last few years. Tonette has been married to her only serious boyfriend for more than thirty years and she is, as one person described her, family-oriented almost to a fault. Never mind how others have described her, she is,(shall we say), a sometime traditionalist of eclectic tastes.She has another blog : "Tonette Joyce:Food,Friends,Family" here at WordPress.She and guests share tips and recipes for easy entertaining and helps people to be ready for almost anything.
View all posts by Tonette Joyce →
This entry was posted in author interview, authors, big plans, book review, Books, careers, characters, Guest, Guest author, romance, Tonette Joyce and tagged A Root Awakening, A Rose From the Dead, Dearly Depotted, Evil in Carnations, Florist Gump, Hallmark Mysteries, Kate Collins, Mum's The Word, Night oif the Living Dandelion, Shoots to Kill, Slay It With Flowers, Sleeping With Anemone, The Flower Shop Mysteries, The Hallmark Channel. Bookmark the permalink.