It was my turn to choose this week’s topic, and with Memorial Day coming up I thought it would be a great idea for us to each write a tribute to someone. I have a couple of favorite American veterans in my family, but since next week is a free week and my next blogging day falls on the actual holiday, I’m going to tell you about them next Monday. Today I’m going to focus on two other American military vets who were a big part of my working career. To me, they embody the essence of American patriotism because they not only served in the Armed Forces but continue to contribute to their community in countless ways.

I spent twenty-eight years teaching in Coopersville, a rural community west of Grand Rapids. During that time I met many remarkable people, and even though I’ve been retired for eleven years I am convinced that I was blessed with the opportunity to work with some of the finest educators anywhere, backed up by a remarkably dedicated support staff and school board. The two people I’m featuring today are Kathy and José Gomez, two incredibly giving individuals well known in the Coopersville area due to their hard work in several areas of the school and community at large.

Both Kathy and José are US Army veterans. They were married on their lunch hour while stationed in Germany. I had the pleasure of teaching their three children in music class. Their lovely family has now grown to include several grandchildren, and their social media feeds are filled with pictures of them all enjoying time together. They both attend and promote so many school and community events that if something is happening in Coopersville, chances are pretty good one or the other (or both) will attend! 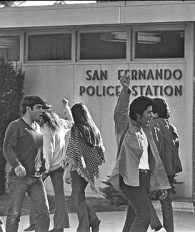 While a student at SFVC, José (far left) joins a protest.

José was born in Ramon Corona, Durango, Mexico. He attended San Fernando Valley College for a year where he became a member of the Brown Berets. He and one of his professors started a group that was the precursor of MEChA, a national organization promoting Latino higher education, culture and history. In 1972 he enlisted in the US Army because he learned he would be able to become an American citizen without paying the naturalization fees. During his time in the service he taught a race relations class where he

met Kathy Barbey, a young lady from Michigan, and he liked her so much he failed her just so that she’d have to take the class again!  After convincing Kathy to marry him he moved to her native state, completing his engineering degree at Aquinas College while working at General Motors and helping to raise his growing family – daughters Sara and Becky and son Alex arrived in quick succession. Eventually he became an engineer at the General Motors Diesel plant, which later became Delphi. While his children were in school he served as a Coopersville school board member for at least two terms (he had the pleasure of handing diplomas to his children), and for the past 15 years has served on the school board for the county (known as the Intermediate School District, or ISD). He’s also a member of the Grand Haven Area Community Foundation, a charitable organization in West Michigan.

Kathy (left) and some of her students enjoy Art Prize in Grand Rapids.

When I started teaching in Coopersville Kathy Gomez worked with the migrant students. Gradually, due to her skills and engaging personality, her responsibilities expanded. Eventually she headed the migrant program, going above and beyond job expectations by visiting the migrant camps regularly and ensuring the children not only attended school but had all the food, clothing and supplies they needed. Each fall, when the migrant families are ready to leave Michigan and head south, she hosts a huge farewell dinner for the families. She also edits the districts newsletter, personally attending many events and taking pictures. My scrapbooks from the time I spent teaching contain several pictures that she took and shared with me. In the past, she’s been involved with the Coopersville Circle of Friends (a community service organization) and the local recreation department. As busy as she is with school concerns, Kathy has a DJ service, providing music 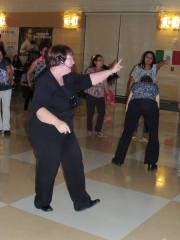 and entertainment for special events. It is really difficult to find pictures of Kathy – because she’s always on the other side of the camera! I did manage to find the pictures here on Facebook, and there are several in a School Communications Network article about her written earlier this year. To read more about this human dynamo, follow this LINK.

The school has a physical reminder of Kathy’s hard work. Recently she teamed up with one of the teachers to create the Wall of Honor in the high school, which recognizes all Coopersville graduates who have served in any branch of the military going back to WWII.

Daughter Sara told me an interesting story about her mother. “When my mom joined [the army] her dad, who was a World War II vet gave her one piece of advice: Don’t volunteer for anything. At boot camp the instructor asked who knew how to drive so she raised her hand and turns out she was volunteering to carry everyone’s backpack.” Obviously Kathy didn’t follow her father’s advice then, and she continues to ignore it!

Both Kathy and José are known as generous individuals who will do anything for anybody any time. I am honored to have known and worked with them, and am pleased to have the opportunity to share with you a small sampling of what they do.

During her first career, Patricia Kiyono taught elementary music, computer classes, elementary classrooms, and junior high social studies. She now teaches music education at the university level. She lives in southwest Michigan with her husband, not far from her five children, nine grandchildren (so far), and great-granddaughters. Current interests, aside from writing, include sewing, crocheting, scrapbooking, and music. A love of travel and an interest in faraway people inspires her to create stories about different cultures. Check out her sweet historical contemporary romances at her Amazon author page: http://www.amazon.com/Patricia-Kiyono/e/B0067PSM5C/
View all posts by Patricia Kiyono →
This entry was posted in Patricia Kiyono, tribute and tagged Coopersville, Jose Gomez, Kathy Gomez, salute, USArmy, West Michigan. Bookmark the permalink.

33 Responses to A Grateful Salute