Yes, not using “Right” was intentional, since this week we are discussing where we write.
And here I sit: 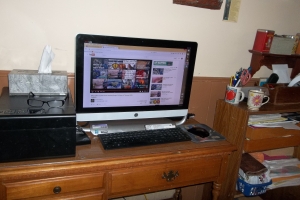 Where I do most of my writing:HP All-In-One

My HP All-In-One has been my place of choice for the past three years…except when it has broken-down three times this past Spring and Summer.

I used to make copious notes with much crossing out, but I found that sitting at a computer is better for me. For one, I can clearly see what I have written. My handwriting was never great, but after years of reading and dealing with my husband’s scrawl, the fact that I think faster than I write and now, have a bit of arthritis, typing is the way to go…even if I have never taken lessons and developed my own 3-4 fingers-on-each-hand style.

Back when I envisioned writing an easy entertaining and instructional cookbook, I made notes everywhere. When I worked at a daily job, I used small notebooks and wrote during my lunch breaks. I had a mini tape recorder and made notes while working around the house. That particular project never really worked for many reasons:1), Aforementioned bad handwriting and trying to figure out notes, 2), it much harder than I could have imagined to transcribe note and then keep track of them and, 3), with the explosion of The Food Network and celebrity chefs, no one can get a cookbook published who is not already famous. Oh, and you don’t even have to be a celebrity chef. Gwyneth Paltrow has put out several cookbooks which have been successful, although, I have no idea why. I perused the first one and she suggested using duck breasts instead of chicken throughout. (Good luck finding THOSE in your local supermarkets and fitting it into your budget; right now, family packs of boneless, skinless chicken breasts are going for less than $2.00 lb in my area. I could mail-order duck breast for approximately $20.00 lb, with shipping and handling, more.) So, I started a blog…which has been neglected, sadly.

And 4), two different mini recorders broke, (there is a sad story about someone trying to use a broken one that played but would not record).I have kept several mini tapes of notes, (what end, I have no idea).

I still have note books in my car, next to my bed and I take one when traveling. I have a small one in my purse, and while I do, occasionally make notes, I forget to use them. The drawback to the notes I made on my PC was that I failed to put most of them on a flash drive, and lost them in a crash last April. I now have a BIG external hard drive, but it is too late for so many story starts and ideas.

I am surprised to see what I have written, and often don’t recognize my own work. Does that happen to you?

I sporadically use my older computer, my Dell From Hell, which does work well as a word

my infamous Dell From Hell

I wrote a lot on that in earlier years on my old IBM.I still have it, but it is really inconveniently placed; I hate to get rid of it. It’s 20 years old, but a still workhorse.I think I’d do more writing in other places if and when I ever get a laptop. But who knows?

And although I am mostly a ‘panster’, I will go through some of my scenes or writings in my head and do a bit of editing, and that is usually done here:

Some people sing in the shower,I edit!

Yes, in the shower!
Anyone else do thinking there?

Tonette was a once-fledgling lyricists-bookkeeper, turned cook/baker/restaurateur and is now exploring different writing venues,(with a stage play recently completed). She has had poetry and nonfiction articles published in the last few years. Tonette has been married to her only serious boyfriend for more than thirty years and she is, as one person described her, family-oriented almost to a fault. Never mind how others have described her, she is,(shall we say), a sometime traditionalist of eclectic tastes.She has another blog : "Tonette Joyce:Food,Friends,Family" here at WordPress.She and guests share tips and recipes for easy entertaining and helps people to be ready for almost anything.
View all posts by Tonette Joyce →
This entry was posted in authors, big plans, careers, experiences, Life, Preparing for writing, Random thoughts, Tonette Joyce, writing and tagged blogging, Gwyneth Paltrow, making notes while writing, self-editing, self-taught typing, taping notes, The Food Network. Bookmark the permalink.