This week we’re blogging about holiday observances which were “totally new and unusual” and the one which stands out (to me) involves my winter during the long Arctic Night cycle at Thule Air Base, Greenland. I can imagine some of you are tired of hearing about my (nearly) full year at Thule during 1972-73, but perhaps you can also see how it remains prominent in my mind.

I had hoped to find my letters from Thule, or at least my copies of the Thule Times newsletter… but I could locate neither. My account would have more of an authentic feel if I could cite the name of the USO group which performed at the NCO Club during the key nights of that holiday season… or if I could remember the feature films which showed at the Base Theater on particular nights of that period. Alas, my memory won’t retrieve those details from 44 years ago. 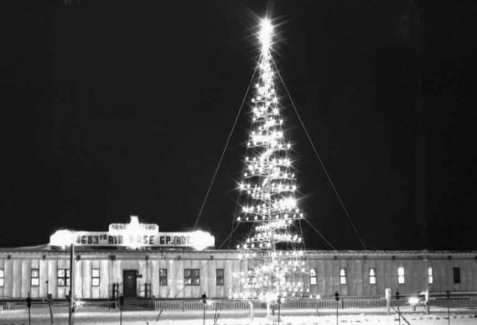 Not from my year at Thule, but this is the base HQ Building. I don’t recall our Christmas tree being that tall, so I’m guessing this was a later year than 1972.

Suffice it to say, for that Christmas and New Year’s, I was alone and away from home — far away. In fact, I was closer to Siberia’s outer islands than to anybody I knew in the states. And while one is not “alone” in a barracks with some dozen other enlisted airmen, one can certainly feel isolated within the Arctic Circle. Back home in Covington LA, were my wife Denise and toddler son David.

I was busy, of course, in our two-person Information Office – just me and the Captain. My primary duty was getting out the bi-weekly newsletter, the Thule Times — and I had to do most of that task by myself.

That particular season, our base Protestant Chaplain, Lt. Col. Bobby C. Black, headed up the annual Operation Julemand — a fund-raiser to buy toys and clothes for the kids of the nearest village of Greenlandic Eskimos. That year, mostly through Chaplain Black’s tireless energy and enthusiasm, our base raised a record-breaking $11,000 from the ( ? 200 ? ) American military and the ( ? 400 ? ) Danish civilians who populated Thule and two outlying radar stations.

In the weeks leading up to Christmas, I had spent more than my usual holiday budget on gifts for wife and family — purchasing craft items handmade by the nearby Eskimos. To my knowledge, the only surviving piece is a wood carving which I gave to my Dad and later re-obtained (after his death). The things made of sealskin and narwhale bone have long ago disappeared.

Residing some 900 miles from the North Pole, one might imagine that Santa Claus would stop at our remote station early in his route, but I never saw any sign of him (or his reindeer). On Christmas Eve (a Sunday), it’s likely I went with some buddies to the NCO Club for the visiting USO group. Some of these groups were American but others were Danish… and possibly other nationalities (can’t remember anymore). [We (rightly) didn’t get the Top Tier USO acts — they were visiting troops in various combat areas of Southeast Asia.]

On Christmas Day (Monday), I have to believe I was at work in the Information Office. I don’t recall any Thule observance of “holidays” such as you’d see in a stateside military office. [In fact, I had some buddies in the Personnel Office who even had to work on Saturdays.] Maybe I’m mistaken about working on holidays; I’m sure my letters to Denise would clarify.

Unless I have this “care package” mistaken with another earlier one, this is the time that I received a carefully packaged apple cake from my wife. Each of some dozen pieces was individually wrapped in wax paper and I ate from it for a week, sharing only one or two pieces with one or two close buddies (including the captain). To this day, it remains the best-tasting apple cake I’ve ever eaten. How it stayed fresh for the week (or more) it took in transit, I’ll never know. My final piece, which must have been at least two weeks old by that point, was still moist and fresh.

Skip ahead to New Years Eve, also a Sunday. For this evening I have a clear memory: I was at the NCO Club with buddies. There was, of course, considerable noise and drinking. [Except for a couple of times that year, I was a light drinker and don’t recall consuming much alcohol that night.]

The USO group was Danish, singing exclusively American songs, as I recall. Lead singer was a comely young lady.

As the midnight hour struck, most of the guys swarmed the stage to get a kiss — a feminine caress being quite a rarity in a base with only two female officers assigned. It wasn’t so much a queue as a small mob, but eventually I was next in the singer’s view. I simply stuck out my hand, intending to shake hers… believing that the mere touch of a woman might suffice. But she caught my eyes, smiled, and pulled me close enough that she could kiss me… and she did.

I hadn’t really wanted to kiss her, those lips having just touched the mouths of all those other lecherous males… but it happened so fast, I had little choice but to follow through with the momentum. “Happy New Year,” I then said to her. I think she replied in Danish.

One of these days, I’ll find the newsletter for late December and get the name of that band. Maybe her name will be included somewhere.

So I guess that’s my most unusual holiday observance. I know for certain I would not want to spend another holiday alone, overseas, in an ice-bound remote radar station.

What is your most unusual holiday observance?

17 Responses to Strange Holiday, On Ice