Eye-Witness to a Bank Robbery

…And the Resulting Gun Battle in a Small Town

Hardly had we begun our stroll down the narrow streets of this time-forgotten town in the arid southwestern desert… when out of the small local bank burst four armed men – desperate enough to gun down anyone in their paths – frantically searching for their pre-arranged means of get-away. My brother and I were transfixed — I wouldn’t have moved if the robbers had aimed directly at me. And suddenly one of them did.

It took a moment for the locals to react. Someone yelled, “Bank robbery!” and then the shooting began. I was close enough that the piercing blasts assaulted my eardrums and I could smell the smoke from their guns. They were shooting everywhere and nowhere. But I was not hit… yet.

Even in dried-up small towns such as this, there was at least one law officer present… and he happened to be no more than thirty-five paces away from us. As he drew his weapon and raced towards the bank, another shooter – clearly a lookout with the robbers’ band – fired upon the lawman from the roof of a building across the street. The officer whirled, fired twice, and the shooter’s body rolled off the roof, dead before he dropped onto the street with a heavy thud.

If I’d had any sense, I should have ducked for cover. Can’t speak for my big brother, but if anything, I wanted to get even CLOSER. No time for any movement by us, however. In just a matter of seconds, three of the robbers took cover behind some shipping crates and soon received a fusillade of bullets from the officer and several armed bystanders who pitched in to help save their bank’s assets. 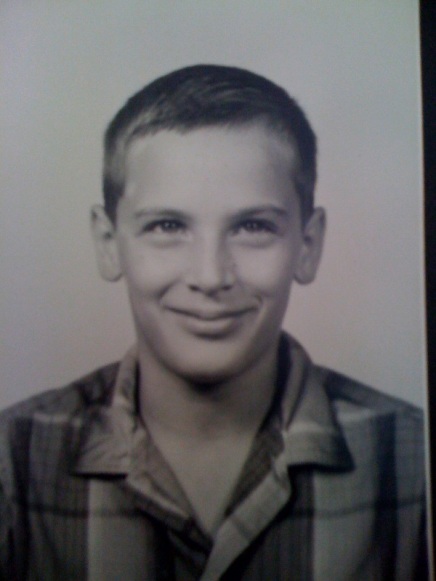 Though this is my sixth grade photo, it gives you an idea of how old I was during this robbery and gunfight we witnessed the previous year.

But I’ve gotten ahead of my story.

This was some 55 years ago and I still remember like it was yesterday. We had just hit town, one of those rural southwest places abandoned by the major thoroughfares and left to dwindle with its few remaining residents… and occasional wayward visitors (such as myself and family). With prosperity long behind them, the citizenry were content to keep their old storefronts — hardly a sign of any civic improvement since the 1880s or so.

Now, back to my story:

Things happened so fast, it was difficult to keep track. But I think one bystander was nicked – appeared to be merely a flesh wound – by a robber’s bullet. That further enraged the townspeople and all who were armed pumped round after round into the inadequate refuge of those wooden shipping crates. One of those three felons went down… obviously dead. Probably had 19 bullet holes when the locals finished with him. That left two at the crates and one of those was soon wounded as well. One robber remained and it was obvious he was completely out of ammo. Finally he waved a grubby handkerchief to signal his surrender. The shooting stopped.

But what, you ask, of the fourth robber, who had hunkered down just inside the bank’s doorway?

Well… with all the money from the robbery, he leapt from the elevated front “porch” and escaped on his horse.

Yeah. Horses… sheriff… guys shooting Colt Peacemakers and Winchester carbines — uh, with BLANKS, of course. This was one of those Old Wild West reenactment shows… and for the first time in our lives (traveling with the family) we’d lucked into the exact right time to be somewhere.

The year was probably 1961. If so, I was in the spring semester of fifth grade. That was the era of television and movie westerns — every network had half a dozen westerns. Or as my dad labeled them, “horse operas.” I loved them. Imagine my delight to see one of those same vigorous scenes reenacted LIVE right in front of us… and us standing on the dusty narrow street of downtown Deadwood (or wherever).

We don’t recall which specific tourist attraction this was, but my brother believes it may have been Trail Dust Town near Tucson, AZ.

This is not the photo from Trail Dust Town, but it gives a good sense of the drama we viewed from our vantage point.

Our whole family of five was crammed into a 1958 Renault Dauphin – one of the worst automobiles ever imported into the U.S. – on our way across the arid southwest desert from Covington LA to the Glorieta campus in the NM foothills of the southern Rockies. Glorieta was one of two major denominational complexes of that era and they hosted meetings, training seminars, conventions, and whatever else religious leadership needed to attend. My dad was a minister at that point, the protestant chaplain of Southeast Mental Hospital in Mandeville. For several years, he attended a convention almost every spring… and my parents usually arranged things with our respective schools for us three kids to go with them. The travel itself was pretty horrible — giving entirely new meaning to the words “extreme thrift.” I could tell you about cold cereal in rundown motel rooms, cold Spam sandwiches in the vehicle while still on the road, and stops only when someone’s bladder was about to explode — but that’s a tale for another day. [And besides, I’ve mentioned a few of my family trips here previously].

Links (to some of my previous accounts of family trips):

National parks of every variety

Broke down in a sandstorm in the Mojave Desert

As for this trip, to whichever recreated Old Wild West town this was… it was a heavenly respite from the hot, boring travel… and landing in the middle of a bank robbery and gunfight was the icing on the cake. I can’t swear to every single detail of the shootout, but I clearly remember the Sheriff whirling around and shooting the guy off the roof.

They probably had shows at the top of every hour during daylight… but as far as I was concerned, they’d staged the whole thing just for me — the diehard western fan.

As I watched those actors, dressed in their cowboy boots and western clothes, hopping on their spirited horses, and firing their Colt .45s… I remember thinking “That’s got to be the best job in the world!”

What about you? Ever seen a wild west reenactment?

15 Responses to Eye-Witness to a Bank Robbery