Delighted to welcome Renee Campbell as my Guest Fox on Hound Day. I first became acquainted with Renee when I was inadvertently sitting in her chair at a recent local author event. Let me explain.

At our county public library’s annual Local Author event last month, I plopped down next to Kathy Ragle, who heads up the Gibson-Ragle Publishing outfit. Since I enjoy supporting local and regional authors, I have hosted three authors (so far) from that publishing house.

“Kathy,” I said, “have you got another author for me to feature on my blog?”

Kathy smiled and handed me a bookmark for Redemption. It turns out Renee just had her first novel released and was due to arrive any moment… and take her place at the author table with Kathy. So, you see, I truly was sitting in Renee’s chair.

When I later introduced myself, Renee won my heart right away — she handed me a tiny box wrapped in brown paper and tied with string. Inside that box was CHOCOLATE.

Author Renee Campbell resides in Somerset, Kentucky with her husband and five children. Renee works in a busy Cardiology office. She loves reading, writing, and outside activities with her family and friends. She has a passion for vintage cars.

[R.C.] — There is nothing like being on the Gulf! The beaches are beautiful and the fresh sea food is amazing! I love the water! There is something so relaxing about the ocean. The ocean is what I miss the most.  Moved from Kentucky to Alabama in 1991 for my father to take a church in Mobile. I lived there until 2006 when we moved back to Kentucky to take care of sick family.

[R.C.] — I have held medical related jobs most of my life. I have worked as a Registered Medical Assistant in gynecology, pediatrics, family practice, as well as performing bone density scans. I also worked as a lab tech for years. I love my current job in Cardiology.

[R.C.] — My husband and I attend a lot of car shows and for some of those people dress in 40’s -50’s attire. I love the era. I love that life was less complicated then. The style was classy and clean. The beauty was real then. I have a lot of fun with it.

[R.C.] — My husband and I have a 1956 Chevy 4 door Wagon and a 1934 Chevy Pickup, both of which are still works in progress. I love that we share a passion for old cars. I spend a lot of time in the garage getting dirty. I don’t know a lot about what needs to be done but my husband is a good teacher. We attend a lot of car shows and have a great time.

[R.C.] — My daughter is a very talented athlete so I spend a lot of time at athletic events. I was not involved in athletics in school. I stayed very busy with other activities. I was into drama club.

[R.C.] — I have been writing in some fashion since I was a child. I wrote short stories and essays in school. I was told that even as a small child I would gather the kids in the neighborhood and tell them stories on the front lawn. I have toyed with writing a book for years and one day I decided that I was not getting any younger. I decided that it was time to mark it off my bucket list. Fiction has always been my favorite. I love that with fiction you can become anyone and go anywhere.

[R.C.] — Thrillers are my favorite type of book. I enjoy the suspense, the twists and turns in thrillers. The guessing about what will happen and why excites me. Thrillers seem to come fairly easy to me.

[R.C.] — I would probably write longer novels if cost were not an issue. You do keep up with the number of pages when cost is a issue.

[R.C.] — I have asked readers to review the book based on their feelings. I have posted messages on social media asking readers for their opinions and they have graciously followed through. I am so very pleased with the reviews that I have seen so far.

[R.C.] — I used to want to be an author as a child, but I was told often that I needed a real job. I don’t think people really believed that I could make a living writing back then. No one I knew had ever written a book so it didn’t seem possible.

[R.C.] — I really don’t know what else I would do if I were not writing. I might try to learn to paint or draw. I would have to put forth some major effort, I don’t think stick people count as art.

[R.C.] — I have had a reader contact me to tell me that she bought my book and read it in one day. She said that she could not put it down and that she was so very glad she read it. She asked me to let her know as soon as my next book Vengeance is available.

Thank you so much for taking time to talk with me, Jeff! I am so happy to be talking with you. 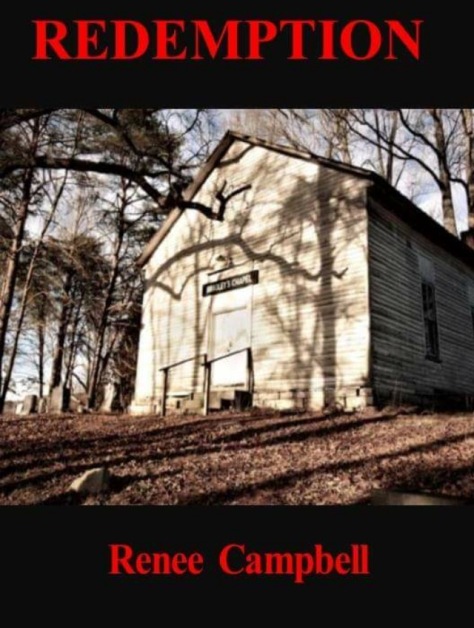 C.J. Cummings had a simple life in small town Riverton Township until Evil itself found its way in. A serial killer is targeting the people she loves the most and leaving C.J. messages at each scene.

Will she be able to find the connection that has drawn this killer to her town?

Will C.J. be able to stop him before she loses anyone else?

Vengeance — Book 2 in the series is coming soon.

What would you want to know most about Redemption? Is there a character in the book that you like the most… and why?