This week’s topic is one I came up with. Since the Independence Day holiday falls during this week, I thought I’d focus on our nation. And an important part of who we are is knowing where we’ve been. So I asked everyone, “If you could choose to be present at one event in America’s history, what would it be and why?”

I confess I’m a history nut. I get lost in stories from past generations, whether they’re fiction or non-fiction. My college advisor tried to talk me out of it, but I took a second minor in history simply because I loved to read about past people and events. It wasn’t unusual for me to stay awake all night to finish reading a book – or write a term paper! Two historical eras stood out for me: England during the Tudor period, and the American Civil War.

Since the Tudor period doesn’t apply here, let’s look at the Civil War, or War Between the States, depending on where you are. This was a time when Americans fought against other Americans. With guns. People who were your friends – even family – were suddenly the enemy. I just can’t imagine that. When our second son was in high school, he contemplated joining the Air Force. While we supported him, we also feared for him. Things were pretty dicey in the Persian Gulf at that time, and we weren’t sure how we’d handle it if he was sent there in harm’s way. He eventually decided to follow a different path, but being aware of the draft laws we held our breaths until he and his brother turned 26. But so many of our friends have sent their sons and daughters off, and it’s not uncommon to see prayer requests for them on my Facebook and Twitter feeds, as well as in group texts and emails. And we all send prayers of thanks each time one of our own is able to return home.

We live in a difficult time, but we’re able to support each other. The moms in the 1860s didn’t have that kind of support. And the only way to communicate was through letters – if they were able to read and write. Some families endured fear and uncertainty for four years or more. So it had to have come as good news for mothers of both sides when the war ended in 1865. And this brings me to my choice of which historical event I would like to have witnessed. 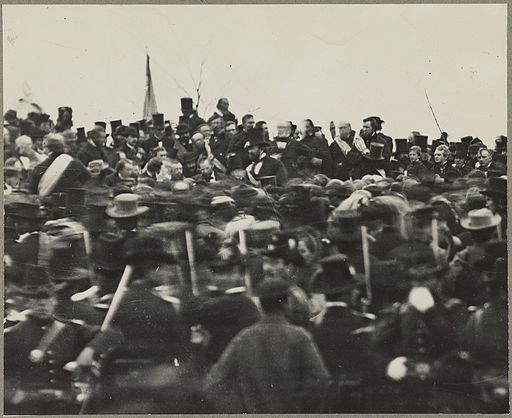 President Lincoln’s speech at Gettsburg on November 19, 1863 is one of the best known in American History. It’s short and to the point. It’s eloquent in it simplicity. And it articulates the very reason why families like mine came here and stayed. Unlike Kennedy’s inaugural address in 1961 and Martin Luther King Jr’s “I Have a Dream” speech in 1963, there is no video record of Lincoln’s remarks at the dedication of the Soldiers’ National Cemetery, so we have to imagine what it was like to stand on that dusty field on that autumn day. I’ve heard several Lincoln impersonators deliver that address, each with his own interpretation of the way Mr. Lincoln spoke. But I found this particular video enlightening. Mr. Mansfield prefaces the speech with what he believes to be Lincoln’s thoughts as he got ready to speak. It really sets the scene for me, on this Independence Day.

During her first career, Patricia Kiyono taught elementary music, computer classes, elementary classrooms, and junior high social studies. She now teaches music education at the university level. She lives in southwest Michigan with her husband, not far from her five children, nine grandchildren (so far), and great-granddaughters. Current interests, aside from writing, include sewing, crocheting, scrapbooking, and music. A love of travel and an interest in faraway people inspires her to create stories about different cultures. Check out her sweet historical contemporary romances at her Amazon author page: http://www.amazon.com/Patricia-Kiyono/e/B0067PSM5C/
View all posts by Patricia Kiyono →
This entry was posted in history, Patricia Kiyono, What if and tagged America, Gettysburg Address, independence day, Lincoln. Bookmark the permalink.