Recently my mother moved to an assisted living place and had to downsize. My siblings and I sorted out her things and among those was a variety of pictures.

My brother has been great about making sure we all have copies of my parents’ wedding pictures, high school pictures, and a variety of other rare family pictures.

One of the pictures I got from the sorting is of my dad. He passed away in 2000 at 81 years old. Our neighbor took this picture and my mom kept it on the dining room table until she moved from the farm where they lived. 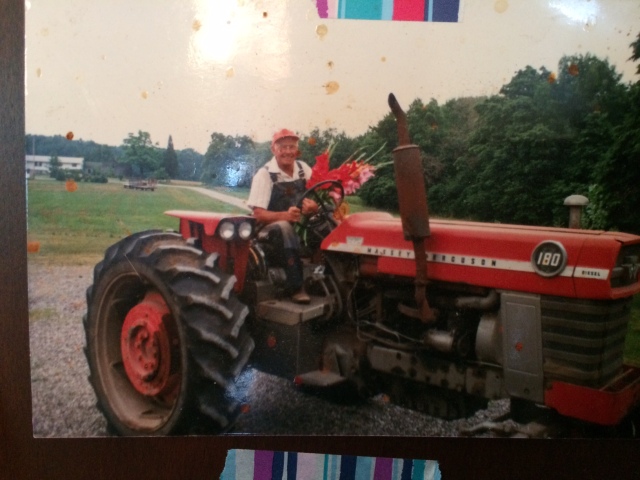 In the picture, my dad is sitting on a Massey-Ferguson tractor in bib top overalls carrying a bouquet of gladiolas.

My dad lived on a farm his entire life except for his years in the army during WWII. Every day that he was doing farm work, either working fields or milking cows, he work bib top overalls. He called them his barn yard tuxedo. My mom saved EVERYTHING and I found several pair of worn out overalls in her sewing things as well as zippers she rescued from just about every single pair he owned. I have those too. It’s hard to imagine my dad wearing anything besides those overalls. In his pocket, he always had a wrench and a pocket knife.

The last detail of the picture is the flowers. I’m sure it took some convincing from my mom to plant them in the vegetable garden. They spread from one row to many and popped up among vegetables from bulbs that were missed. Each year they dug them out and stored the bulbs in the root cellar. In the spring the bulbs went out to the garden to await their glory in late July. When those flowers were blooming, I don’t think anyone left our house without a bouquet. Reds, yellows, pinks, and purples graced our table well into September. The flowers had to be shared and my dad made sure they brightened the lives of many people. It shows that while he understood the need for food and providing for his family, he also saw the joy in romance.

In the background, you can see our house and driveway. The farm that my family worked for many years through thick and thin. And is no longer there.

In this particular picture, he’s bringing one of those bouquets to our neighbor in the middle of the workday when the easiest means of transportation was the tractor, probably as he was on his way out to the field.

I don’t think this is quite a thousand words, but one picture can hold so many memories.

13 Responses to One Thousand Words