Guest Author: Behind the Dugout with Jean Joachim

During the summer months, hubby and I watch a lot of baseball. I grew up watching the Detroit Tigers, but hubby, even though his family was only twenty miles from mine, was raised as a White Sox fan. So any time either of those teams play, the TV is on. In the fall, the hubby never misses a Detroit Lions game, even when the grandkids are here. And college basketball dominates the screen for most of the winter.

Although I watch a lot of sports (well, for football and basketball I mostly listen rather than watch), I doubt I could write a story set in the world of sports. Jean Joachim is one author who can and does wrote sports themed romances – in fact she has a nine-book football series as well as a five-book (so far) baseball series! I’ve read several of Jean’s sweet romances, so I’m pretty confident I’ll like her sports-themed books, too. I purchased Bobby Hernandez, Second Base, the most recent in her Bottom of the Ninth series, and plan to read it soon. And then I asked Jean a few questions about how she managed to write so many books set in the world of professional sports. Happily, she answered!

When Patty invited me to write a blog, she had specific questions relating to sports romance. I haven’t written before about the “why” I write sports romance. Maybe it’s time I did.

PK: Where do you get your inspiration and expertise in sports? Were you a sports mom, or did you play when younger?

JJ: Whew! Three questions in one.

I grew up in Rye, a small suburban town near New York City. Our high school went from grade 7-12. We had phys. ed. every day! And the girls’ program was rigorous. We played everything, except football, but including lacrosse – before the boys even played that challenging sport. I grew to be strong and enjoyed the competition, and exercise.

At sixteen, I fell in love with baseball. I had crushes on the high school football players and wrestlers, but then I discovered Mickey Mantle and the New York Yankees. Talk about heartthrob! I watched games after school, and read sports columns in the newspaper.

I have two sons. When they grew tall enough to see over the high grass in Central Park, we signed them up for fall soccer. Then we added spring, and, finally, winter basketball. For three seasons a year, we ran to games. I even co-coached my youngest’s soccer team. Hey, I’d spent six years playing the game, I knew what I was doing.

My husband caught football and baseball fever from his dad. We watch the games together. Even today, I find myself developing crushes on the players. There’s just something magnetic and sexy about a star athlete. Maybe it’s the great physical shape they’re in, or their energy, or their fearlessness when facing a brawny defenseman on the gridiron or an ace pitcher in the batter’s box.

PK: How much research goes into writing a sports romance? Do you interview athletes, shadow them? Do you base your characters on current athletes or people you know?

JJ: Plenty. I have a book for each sport and I watch games. I also go to my twenty-something sons, and my husband, with questions.

I’ve never interviewed a pro athlete. Doubt I could stop drooling long enough to squeak out a question. I wish I’d had the opportunity to shadow a player during practice or interview one. I’m far too shy to ever approach any –totally afraid they’d think I was a stalker.

Having been exposed to sports, when I was younger, pointed me toward writing sports romance. With a lively imagination and a love of research, I’ve been able to conjure up my own teams and get into the skin of my players. I rarely base my characters on a real person. I prefer to invent them. But I have been inspired by the Green Bay Packers – a team that belongs to a small city, and Aaron Rodgers, in particular. His performance on the field is amazing.

My newest inspiration is Michael Conforto of the Mets. He turned winning a once-in-a-lifetime chance to come up, midseason, from the minors when a star player was injured, into a tour-de-force. He’s become a star in his own right. What a story!

You can read about my football players in my First & Ten series. There are nine books, because I couldn’t bear to leave the team. If baseball is your poison, try Bottom of the Ninth. There will be nine books in that series for the same reason. The first five have been published and I’m writing number six now.

Thank you, Patty for having me here. And to those reading this, thanks for stopping by. 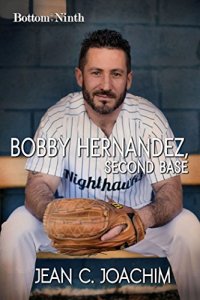 Be sure to check out Bobby Hernandez, Second Base (click on book cover to order from Amazon):

Star Nighthawk second baseman, Bobby Hernandez, shunned groupies looking to share his bed and his bank account. Seeking a woman who would help him recapture the Dominican culture he’d lost was like finding a four-leaf clover…until he met smart, sassy, in-your-face Elena Delgado, newbie reporter.
A confrontation, and a hostile interview couldn’t cool the sparks igniting between them. Secrets smoldered. Lies were revealed. Could Bobby stop protecting his heart and take a leap of faith? Would Elena risk everything for him, or sell him down the river to get ahead?
Caution: Locker room language.

During her first career, Patricia Kiyono taught elementary music, computer classes, elementary classrooms, and junior high social studies. She now teaches music education at the university level. She lives in southwest Michigan with her husband, not far from her five children, nine grandchildren (so far), and great-granddaughters. Current interests, aside from writing, include sewing, crocheting, scrapbooking, and music. A love of travel and an interest in faraway people inspires her to create stories about different cultures. Check out her sweet historical contemporary romances at her Amazon author page: http://www.amazon.com/Patricia-Kiyono/e/B0067PSM5C/
View all posts by Patricia Kiyono →
This entry was posted in Guest author, Guest author post, romance, sports and tagged baseball, football, inspiration, Jean Joachim, research, sports romance. Bookmark the permalink.

16 Responses to Guest Author: Behind the Dugout with Jean Joachim