I have long wanted to share with y’all the writings of my friend Phil Bazar. We grew up in the same area (St. Tammany Parish, LA), went to the same high school (though a few years apart), he currently lives in my old hometown (Covington LA), and we share some of the same collecting interests. Phil is also married to the sister of one of my best friends in high school.

I first became aware that Phil was also a talented writer as I stumbled upon his short (Facebook) pieces, which I like to call vignettes — I don’t know what Phil calls them.

Originally I had hoped to have a short interview section here today, but Phil got busy again and family is always a priority for him. [Rightly so.] Perhaps we can persuade Phil to return to 4F1H and share more biographical detail (along with another vignette).

From what I know of Phil, his “special” specialty is woodworking. If he can see something and handle it… he can craft one just like it. I’ve seen his duck decoys (yes they used to be carved) and other types of models and statues. But here’s Phil himself, presumably showing off his CULINARY skills. 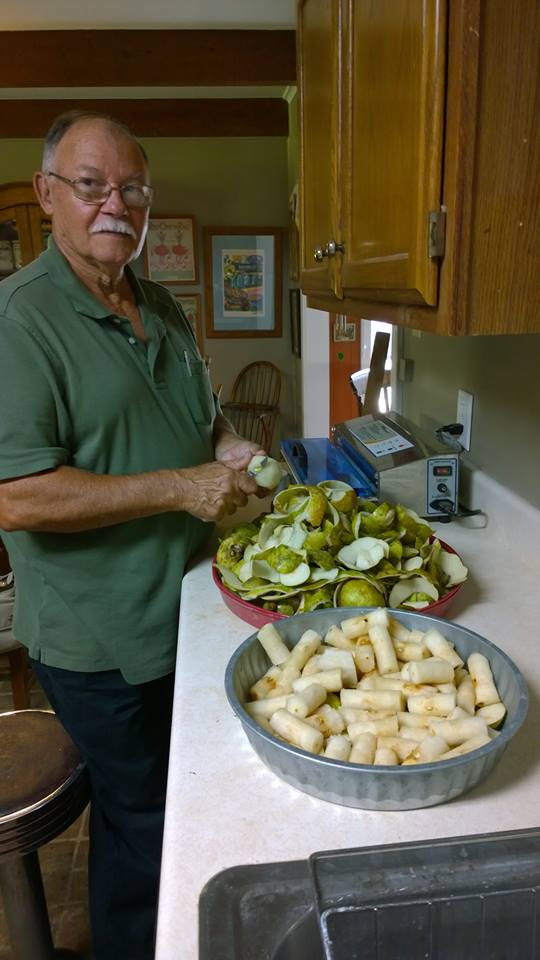 Phil manifests an affectionate reverence for the talented-but-unheralded old-timers who helped build this great country… or who helped make it greater. Some of Phil’s most powerful vignettes dealt with individuals he knew growing up… and I still hope I can persuade him to locate some of those for me to reprint here.

Below is one of Phil’s vignettes. Notice, how (when Phil begins describing the barber) that you can picture yourself in that scene.

This is a puzzle box that I made years ago to keep my straight razor in. I saw a picture of one that was for sale. They wanted too much for it so I made my own. They theory was that small children would not be able to figure it out. I doubt that.

Adults, on the other hand, seem to have the most problem — especially the ones that I hand the box to. I have had to take it away from some who would not stop short of breaking the box to get it open. 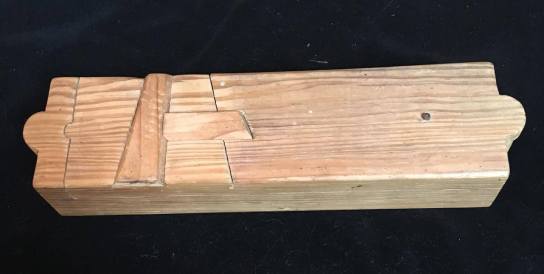 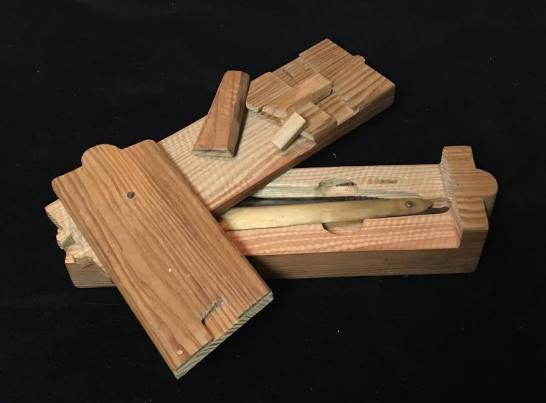 Once opened, you can see the razor inside

I would shave with a straight razor occasionally just to keep in practice and I like to sharpen things — razors, kitchen knives, especially carving knives, pocket knives, chisels, etc. I have about a dozen sharpening stones and hones. I digress.

Back to razors, the reason that I don’t shave with straight razors anymore is that since I had my carotid artery cleaned and serviced, my throat is numb on the left side. I am afraid that I may cut my throat since I can’t feel what I’m doing.

At one time I had about a hundred Pre-1900 razors. I still have about 50. I sell them on eBay now. The ones from the 1700’s are the easiest to sell. The Civil War era ones — not so easy. I have a bunch of old New Orleans marked razors but there is no interest in them at all.

The old barbers are fun to talk to about shaving, back before the board of health stopped the practice. I can remember my grandpa going to Loreauville every day to get a shave. It only cost a quarter or maybe 50 cents. The barbershop was across from the Post Office and just down the street from grandpa’s sister’s cafe, Aunt Tee’s. I loved making that trip as a kid with grandpa in his old Studebaker pickup truck. I met a retired barber from Ville Platte who loved to handle my razors and talk about shaving. My friend (who shared a table with me at the gun show) and I called him, The Barber from Seville Platt.

I’m sure that this barber dreamed in Cajun French. He was a lot of fun! He explained that some faces were difficult to shave. You had to tell them to put their tongue in certain spots to iron out pockets that were hard to shave. Barbers had to have the gift of gab, but this man had a double dose of that gift. It is sad that few are interested in these things that were so much a part of every day life, way back when.

Do you enjoy collecting certain items? Are you a creative wood-worker? Have you known any barber of that type Phil describes here? Leave a comment and let us know.