Posted on September 25, 2017 by Patricia Kiyono

I’m back into my busy fall routine: teaching class two afternoons a week (and grading papers at night) plus playing in three different musical groups. Knowing that my time in the next few months is going to be rather limited, I decided to take Labor Day weekend off and just read. So this month’s list is quite long, but I expect the next few will be quite short. Anyway, these are the books I added to my Goodreads challenge this month. Click on the book covers to order:

This is a lovely short novella about two high school sweethearts who are given a second chance at love. Set in an idyllic seaside town of Marion, Massachusetts, this was a fun end-of-summer read. The main characters were high school sweethearts torn apart by social expectations. The ending was a bit surprising, and a bit disappointing. I’m not sure I understand why characters did some of the things they did. Still, it was an enjoyable, nostalgic story.

Jan is a fellow member of a Facebook group called Seasoned Romance authors. This is a lovely short story about a widow who’s determined never to marry again, and a widower who’s determined to change her mind. Grace suffered through a long marriage full of emotional abuse and wants nothing more than to live her own life. But Howard offers so much more. He’s strong, handsome, and it doesn’t hurt that he’s wealthy. But what makes him real hero material is that he’s willing to let Grace call the shots in their relationship, and he loves her for herself. I couldn’t wait to read Book 2!

After reading Prequel, I checked my Kindle library to decide what to read next and was pleasantly surprised to discover that I’d already purchased Book 2 in the series earlier. So I immediately opened it and started reading. This time, the focus is on Kelly, the forty-year-old daughter of Grace. She’s harboring a secret she’s held for years, and she’s afraid her decisions will come back to haunt her, especially when her own mother marries the father of the boy who broke her heart twenty years ago. I liked the story line, and for the most part I liked the characters. But I felt that some pivotal situations were glossed over, particularly the characters’ reactions.

Having read books 1 and 2 in the series, I launched into the third book and read it in an afternoon. This book focuses on Grace Baron’s granddaughter, Colleen – also known as C.B. In the Prequel, Colleen marries her Prince Charming. In Book 2, she’s a happy housewife. But in this book, her fairytale world falls apart when she discovers her husband has not only been unfaithful, but her he flunked out of med school and is hooked on drugs and alcohol. She divorces him and tries to make a life for herself and her son, with her family’s help. And part of that life includes getting a job as a typist for a famous romance novelist. There are always a lot of difficult issues in a broken marriage, and I felt this story deals with them realistically.

Rescue Me by Sharon Kleve

Sharon is a prolific author I met when I featured and reviewed an anthology she’d participated in. After that, she emailed me to ask if I’d read and review one of her single titles, and now I’m one of her regulars. Rescue Me is quite a bit spicier than a lot of the books I usually read, and there were a few editing problems in the book. Still, this is a highly entertaining story. The not-so-graceful Sage McGuire is a PI, and her fiancé, Carter Morgan, is a narcotics cop who always comes to the rescue. Sage and her mishaps remind me of the Stephanie Plum stories. Things get done, but not always in the most efficient way. There’s the secret admirer, the ghostly Mr. Smithson, and a host of other characters making this a quick and fun read. 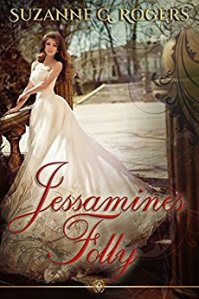 I adore S.G. Rogers’ romances, and I often purchase them as soon as they become available. Unfortunately, I don’t always get the chance to read them right away. When I do, I’m always swept into a colorful world of rich history, gripping intrigue, and heartwarming romance. Jessamine’s Folly is no different. I was taken into the depths of Jessamine’s misery at losing all she held dear, cheering her on as she made her way, and smiling as the villains received their due.

The Mannequin by S. G. Rogers

I had so much fun reading Jessamine’s Folly that I immediately opened up and read another of Suzanne Rogers’ fabulous romances. I treated myself to a chapter at a time while I was writing, but once I got about halfway in, I ignored my writing and kept reading. Rosamund, like Jessamine, endures life as a poor relation in her aunt and uncle’s household, and finally accepts a position as companion to a dowager duchess. But the position is actually a ruse. Rosamund has been hired to encourage the duchess’ grandson, who has become a recluse after losing his parents and younger sister. Romance ensues, but jealous cousins and long-held beliefs stand in their way. Reading anything by S. G. Rogers is the perfect way to spend a weekend!

This is a sequel to The Mannequin. Once Rosamund becomes engaged to marry a duke, her position as a mannequin (someone hired to model a designer’s clothing line) for Madame Montagna is open. Grace is trying to hide from a beastly nobleman who’s accused her of assault, and ends up in London, planning to stay with her cousin. But Cousin Joe has troubles of his own. Ever resourceful, Grace manages to find help for Joe, while securing the position of mannequin. But since Grace needs help learning the ways of the gentry, Lord Henley is pressed into service. This story is quite a bit longer than The Mannequin and there are so many subplots, but Rogers ties them together cleverly.