Today I’d like to welcome author Sandy James, with whom I have become Facebook Friends through mutual friends. Glad to finally have you here, Sandy!

Thanks so much for having me!!

Sandy is a prolific, award-winning writer of romances. She has stand-alone and several series to her credit, and continually manages to pull more out of her hat, all while being a teacher of psychology, a doting grandmother of two little ones and the ‘mom’ of a precocious pooch!

Let’s start with the obvious, Sandy. It would seem that knowledge of psychology would be a natural help in writing about relationships, but can too much knowledge get in your way? Do you find it harder or easier with your background to keep your characters from being overly (accurately) analytical of themselves or others?

I always say that a little psychology is a dangerous thing.  Actually, I’ve felt that knowing the subject helps my character development significantly. Yes, I might want to layer the backstory a bit heavy, but my editors are happy to cut anything too extraneous. I love knowing what drives people, and by having such a strong base of psychology knowledge, I feel I make my characters more realistic.

Nope. No co-authors. I do, however, write sci-fi under the name S.J. James instead of Sandy James. I can’t imagine how difficult it would be to write with a partner! I do have a few great critique partners who are more than willing to call BS when they read it. They’ve saved my hide more times than I can remember!

Although most of your books seem to feature modern-day life, several have been set in the past, particularly the Old West. Why there? How do you do your research on the times past?

I love that era! My in-laws used to own a ranch in Montana, and I fell in love with the place. Whenever I write my Safe Havens stories, I picture that ranch. The Old West was so full of interesting people, and life was harder! The simplicity was enchanting—no tv, internet, smartphones. People had to connect in different ways. The setting itself becomes a character. I research by reading journals of people who lived in the time as well as nonfiction books, plus I’ve been a history teacher, so I have a good base of knowledge from which to pull. 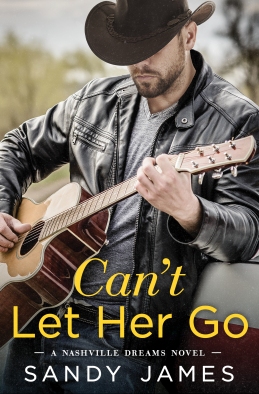 Sandy, please tell our readers about your horses and how they enter into your works.

My late husband Jeff and I lived in Chicago when we were first married. My cousin was the only person I knew there, and we spent a lot of time with her and her husband, who was a harness race driver. We fell in love with the sport. Jeff was always fascinated with the idea of owning a racehorse, so once the kids were older and we had a little more money, we invested in one. We’ve owned as many as twelve at any one time. To this day, I own at least one racehorse as sort of a way for me to honor Jeff. I love writing about horses and the harness racing world since there aren’t a lot of people familiar with the sport. “Murphy’s Law” was my way of sharing my love of that world with my readers.

You also have a number of supernatural stories/series published. Can you tell us what inspired those?

When my son Kevin was still living at home, we shared a love of movies. We’d sit there before the shows started and talk about book ideas. After watching a movie about a superhero (can’t even remember which one!), I decided to write a story where ladies were the superheroes. Kevin and I talked and talked, and the Alliance of the Amazons was born in those shared ideas. I love writing urban fantasy! I get to create my own world that operates under my rules. How fun that series was to write! I’m so thrilled that all four books are now available in paperback. (Thanks, Harlequin!)

Do you have a coterie like the group in your “Ladies Who Lunch” series?

I do! I based the idea of that shared lunch period on my friends at school. Two of them are breast cancer survivors, so that’s where Mallory’s story came from—it was a way for me to show how brave they were in the face of that disease.

The couple of your books that I have read are, um, ‘spicy’! Quite descriptive! Are all of your works of ‘bodice-ripper’ variety?

Spicy? In comparison to other books out there, I think they’re rather middle-of-the-road.  All of my books contain love scenes, because what better way to show a connection between characters falling in love than in their physical affection? I try to keep them tasteful and appropriate. No gratuitous sex in my stories, just expressions of the couple’s love.

You have quite a following. What do you hear as feed-back from your fans?
How about your students, fellow teachers and others?

My fans are amazing! I love their reviews, posts, and emails! When my husband was battling cancer, their love and support were so helpful! What they tell me often, and what I’m most proud of, is that they feel as though my characters are “real.” Quite a compliment!
My students are so funny when they find out I’m a published author. They seem so impressed, which makes me laugh. I tell them there’s nothing impressive about it. I’m just tenacious and refused to give up until I met that goal, and then I always tell them that they can do the same with any goal they set for themselves. My fellow teachers are so supportive! From the time I started writing, they’ve been my biggest cheerleaders.
I don’t know that I would ever have finished that first book without my family backing me up. Jeff gave me the courage to try to publish, and I will always be grateful that he encouraged me. My children are amazingly loyal. Without their love, I wouldn’t have survived the last two years.
Losing Jeff derailed my life. He was my everything. It’s taken so long to write again, and I thank everyone who has offered kind words or a pat on the back as we faced the battle with colon cancer and I faced losing the love of my life.

Does writing under your real name cause any conflict with your teaching life?

When I received my first book contract, I went to my principal and told him that I was writing romance and that I’d use a pen name if he thought it was best. He couldn’t have been more supportive and told me to publish under whatever name I preferred. I’ve had two other principals since that time, and they have both been there supporting me. I also don’t write anything I’d be embarrassed about. Otherwise, I wouldn’t published under my own name. I even have parents who are fans. 

What has been your most personally fulfilling of your work(s) so far?

Depending on what day you ask, I might give you a different answer. lol
“Murphy’s Law” will always have a special place in my heart, because I was able to share my love for harness racing. I also admire the heroine, Katie Murphy, so much, and I love the character arc—redemption—of the hero, Seth Remington.
“Turning Thirty-Twelve” is fulfilling since Jackie Delgado is essentially me! There’s no heroine I’ve ever written who come closer to my personality—part snark, part insecurity, and part loving so many people in her life.
I’m also incredibly proud of the four books in the Alliance of the Amazon series. There was so much research on mythology, and the way the four women are linked builds as each story progresses. I hope that by the time the readers hit “The Volatile Amazon,” they will see the growth in all the characters. It was a wonderful series to write. 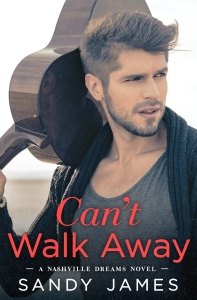 Thanks so much for being with us, Sandy! Please tell our readers how they can learn more about you and your works?

I have a website (http://sandyjames.com ), and I’ve active on Twitter (@sandyjamesbooks) and on Facebook (sandyjamesauthor). My next series—Nashville Dreams—began on October 10th when “Can’t Walk Away” released! The series is set in Nashville, Tennessee and revolves around the country music world.

Here’s the blurb:
In Nashville the stars shine a little brighter, songs sound a little sweeter, and love lasts a lifetime.

Young, rich, and better looking than a man has a right to be, successful songwriter Brad “Hitman” Maxwell was once Nashville’s biggest celebrity. Then a heartbreaking loss and a shocking betrayal caused his light to go out. Now, instead of pouring his soul into song, he pours beers at Words & Music. His bar is the perfect escape–a place to forget his past–until the night she takes the stage…

Savannah Wolf used to dream of becoming Nashville’s hottest star. Now, as a young single mom, she dreams of a steady income and being home to tuck her daughter into bed. So when Brad Maxwell offers her the gig of a lifetime–playing as the headliner at Words & Music–Savannah discovers the best of both worlds. And she refuses to ruin this opportunity by falling for her sexy boss. Except that Brad suddenly starts writing music again… music inspired by her.

Tonette was a once-fledgling lyricists-bookkeeper, turned cook/baker/restaurateur and is now exploring different writing venues,(with a stage play recently completed). She has had poetry and nonfiction articles published in the last few years. Tonette has been married to her only serious boyfriend for more than thirty years and she is, as one person described her, family-oriented almost to a fault. Never mind how others have described her, she is,(shall we say), a sometime traditionalist of eclectic tastes.She has another blog : "Tonette Joyce:Food,Friends,Family" here at WordPress.She and guests share tips and recipes for easy entertaining and helps people to be ready for almost anything.
View all posts by Tonette Joyce →
This entry was posted in author interview, author's life, authors, book covers, Books, careers, characters, experiences, Family, Friendship, Guest, Guest author, Harlequin, history, hobbies, inspiration, Life, memories, Miscellaneous, publishing, The Author Life, Tonette Joyce, writing, Writing and other professions and tagged "Ladies Who Lunch" series, "Murphy's Law", Alliance of Amazons, Can't Let Her Go-Nashville Dreams Novel, Can't Walk Away-Nashville Deams Novel, Harness racing, Pen names, psychology, Sandy James, teaching, Western books. Bookmark the permalink.