Serendipity Took Me There

This week, we’re blogging about unusual ways we found books or authors and I have a great example of each. One was how I found an author – Bill Bryson – whose writing talent has inspired me to read perhaps a dozen (or more) of his titles. The other was how I heard (from the author) about a book that never would have otherwise crossed my radar – because it could be described as a travel guide to Savannah – but I didn’t care for the only other book I’ve read by that author.

Let’s deal first with Bryson. Here’s the set-up: I had already re-located to Possum Trot KY, after my retirement from the library profession. Our daughter still lived near Memphis and I’d drive down there at the drop of a hat (like when my grandson’s kindergarten had ‘grandparent day’). Well, on this particular occasion, my wife – still working at that point – was also with me (I think). I had neglected to bring a book to read (as I normally did), so I asked my daughter if she had any books which might interest me.

Julie (at that point, anyway) read a lot of the same genre books that my wife read — which didn’t interest me. So she kind of shrugged and said, “The only other book I have is one my sister-in-law loaned me.” I probably scrunched up my face. “Is it any good?” I asked. Julie’s reply: “Don’t know… hadn’t had a chance to start it yet.” She held it up. I scanned the cover from a distance. “It’s about a bear?” 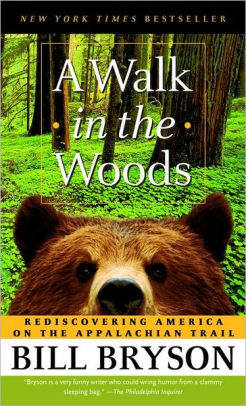 Julie responded, “It’s a book, Dad. I think it’s supposed to be funny. Just read it.”

Well, besides the fact that I’ve never read a book about bears (other than kiddie picture books) here’s the main issue: I’ve only been in the presence of my daughter’s sister-in-law during the wedding… and didn’t even remember that encounter. But from the few things I’d heard about her since, I pretty much figured that her reading preferences and mine would have very little overlap… if any.

But, being the brave and daring reader that I am – not to mention a librarian for nearly 30 years – I gingerly opened the cover of a monograph which gave me absolutely no idea whatsoever of its content. All I could discern was that it was not a novel… and (as I soon learned) not really about a bear. However, I scanned enough of the review excerpts – sprinkled generously over the first two or three pages – that I could tell somebody thought it was funny. “Funny, indeed,” I thought. “I’ll bet it’s one of those books that’s only humorous to pin-headed reviewers.”

It was a slow start, as I recall… and I was hampered by having no prior knowledge of Bryson’s buddy, Katz — who’d traveled with him years before and who’d been specifically recruited to participate in this trek. So I’m sitting on the sofa in Julie’s living room and suddenly I start chuckling. It’s noticed by my wife in the kitchen. Soon, I’m laughing… and Julie elbows Denise, as if to say, “See, it IS funny, after all.”

It wasn’t long before I was laughing so hard that I doubled over, tears in my eyes, gasping for breath. Wife and daughter both came over to witness the spectacle. “Are you all right?” they asked. Apparently they figured I was having a fit or something.

So consumed with laughter that I was unable to utter intelligible syllables, about all I could do was point to the book. One of them picked it up and glanced at the paragraph I’d tapped with tear-stained fingertips. She read it and shrugged… then handed me back the book. [Folks, that’s an important lesson about humor — a funny passage taken out of context… is quite often not funny in the slightest.]

Well, folks, laughter can still be contagious at times. Even if you have no idea what the first person is laughing about, you can become infected and start laughing too. Though, probably, you’re only laughing at how amused the first party is.

All that is merely to say that my introduction to the many wonderful books of Bill Bryson was through this “bear book” that had been loaned to my daughter by her sister-in-law. As I noted above, I’ve read another dozen or more of Bryson’s books and have enjoyed each one — though none have been as gut-splittingly funny as “A Walk in the Woods.” I’m almost afraid to watch the movie with Robert Redford, because I fear it will be such a let-down.

Midnight in the Garden of Good and Evil

As a professional librarian for most of three decades, I had the opportunity to hear many acclaimed authors speak. Along the way, I’ve purchased a number of autographed copies of their books. But most of those went into my TBR pile… and promptly got buried by other titles which more immediately captured my attention. An exception to this was when I heard John Berendt speak about his experiences writing Midnight in the Garden of Good and Evil.

I’m pretty sure I’ve been to or through Savannah GA and never had any particular thought (one way or another) about that “deep South” metropolis. And the title of this book was not only off-putting to me, but quite confusing. Well anyway, Berendt had been sent there by his magazine to do a feature article. Once there, he discovered a lively assortment of local “characters” and soon found himself on the fringes of a notorious murder trial. I guess it was partly the serendipity of a magazine writer stumbling into the story of a lifetime, which he turned into the best-selling book of a lifetime (later made into a lackluster movie, by the way)… which captured my fancy. Also, Berendt was a very entertaining speaker.

Well, the short version is — as soon as I returned home from that conference, I put my name on the request list to read his book. And it’s a terrific true story. One of the more fascinating things about the success of his book is that it has significantly boosted the tourism of Savannah… and many of its local shops sell copies of Berendt’s books with annotations or other ways of highlighting where and how THEY are featured in his tale.

Having liked his first book so well, I was excited to read another — Berendt’s visit to Venice… and him stumbling upon the aftermath of the suspicious, fiery destruction of a notable theater. But that book was only so-so… and I determined that I had no desire to start another (if Berendt were to release one).

I could provide other instances of how I found myself enjoying a book and/or an author – by means other than the typical – but I think these two examples suffice. If there’s a message here, perhaps it’s this: don’t turn your nose up at a book just because it was recommended by someone you don’t know or you have reason to believe has totally different reading tastes.

Have you ever come across a book by some manner that did not seem typical?

16 Responses to Serendipity Took Me There