And I’d be delighted to read them again

This is a topic which we’ve partly covered in previous 4F1H schedules… but not necessarily with this particular wording or specific focus. So I’ll track down my previous treatments and then see if there’s anything left to say. 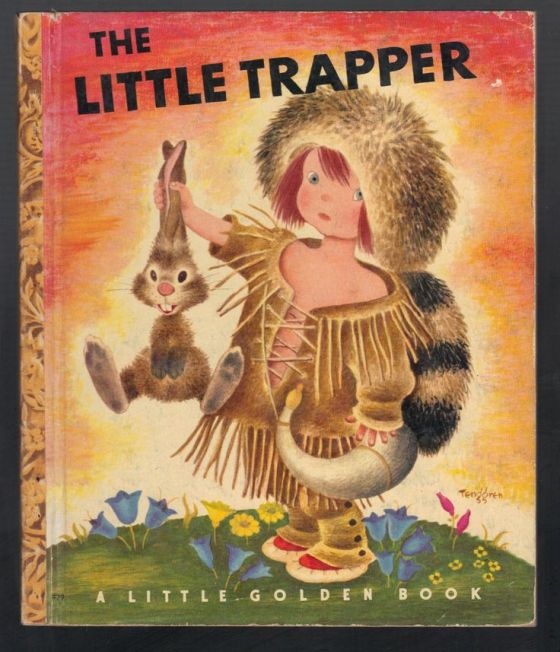 But first, let me mention this book — which stands out not only as one I read and re-read as a kid, but which I also read to my own children. I think I’ve read it to some of our grandkids, too, but can’t recall for certain. It’s one of my favorites from a favorite series, the Little Golden Books. This particular story, about the Little Trapper, features a frontier boy out to prove his prowess as a trapper, in part to impress a pretty little Native American girl. Along the way he encounters a foxy fox — the animal, that is. I won’t spoil the ending for you…

This Hound Day blog – from Oct. 17, 2013 – is closest to today’s subject, although its purported topic was about visiting bookstores. In it, however, I discuss two of my favorite childhood books: Teddy and the Mystery Dog and Miss Minerva on the Old Plantation. As a grown-up, I’ve re-read the Minerva book (and others in that series). I would eagerly re-read the Teddy story… if only I could locate my old copy.
https://fourfoxesonehound.wordpress.com/2013/10/17/back-when-bookstores-just-had-books/

This blog – from Dec. 11, 2014 – is also fairly close to today’s topic, though it focuses on the CHARACTERS which inspired our childhood imaginations. In this column I mention – one of at least three times (here at 4F1H) – the Bobbs-Merrill Childhood of Famous Americans Series. My sister, a bookstore owner, has located and sent me between one and two dozen in this series. I can’t now recall which titles, but I have re-read some of these biographies as a grown-up. I have to confess they do not hold up as well as I had supposed they would — mainly because I now realize they featured rather highly fictionalized biographical anecdotes. A very recent example is the Bobbs-Merrill version of Abe Lincoln’s childhood. Quite different from the authentic history which I’ve just recently read in a scholarly biography of our former president.
https://fourfoxesonehound.wordpress.com/2014/12/11/they-captured-my-childhood-imagination/

This one – from Apr. 14, 2011 – also features a portion that deals with our topic: namely, some of my favorite children’s stories (e.g., the Little Golden books).
https://fourfoxesonehound.wordpress.com/2011/04/14/favorite-titles-books-ive-read-more-than-once/

This one – from Mar. 24, 2011 – includes a portion that deals with our topic: namely, the Bobbs-Merrill Childhood of Famous Americans Series.
https://fourfoxesonehound.wordpress.com/2011/03/24/most-influential-books-which-shaped-me-as-a-writer/

This one – from Oct. 2, 2014 – would only qualify for today’s topic if we consider “childhood” to include my ninth grade (age 14-15). If so, we’d be talking about how much I dove into (and enjoyed) the James Bond novels by Ian Fleming.
https://fourfoxesonehound.wordpress.com/2014/10/02/favorite-authors-andor-books/

Well, the Little Trapper is my pick for today’s topic… along with links to some other blogs which have skirted this same matter. Hope you enjoy them all.

Question: What book from childhood made the biggest impression on YOU?

17 Responses to Childhood Books Which Left a Big Impression