Listen to the Experts

This week, our resident hound asked us to choose a celebrity we’d want to hold up and endorse one of our published books on a national stage (or TV).

My first thought is that it would be an honor to have any well-known person support my writing. But accolades coming from someone in the same field, whose work you’ve admired, mean even more. And there are two authors who lead the way in my genre of sweet romance. Back in my super hectic working mom days, reading romances helped me keep my sanity. It wasn’t so much the mushy romance stuff, but it was the way the heroine managed to overcome whatever obstacle she faced, often with the hero’s help. Sometimes the hero was the obstacle. Anyway, two authors whose work I devoured were Rebecca Winters and Debbie Macomber. Their books made me laugh, cry, and sigh with contentment at the happily ever after. I read everything on my local library shelves with their names on them, and then I faithfully checked the paperbacks in the department stores for new titles. If their names appeared on the covers, I didn’t even look at the title or the rest of the cover – the book went in my cart. 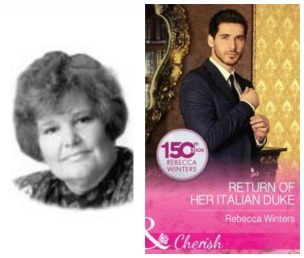 Rebecca Winters is a prolific author, with almost 50 books published by Harlequin, the premier publisher of romances. She’s also won numerous awards, so her talent as an author is well known. I first discovered her when I read Bride of My Heart and found myself re-reading it over and over. Then I discovered that it was part of a series and searched the library shelves for the other two titles (The Rancher and the Redhead and The Mermaid Wife) as well as anything else I could get my hands on by her. Her books are often set in Europe, and the way she incorporated the various settings in her stories made me eager to write about the places I’ve visited. This past year, she published her 150th book – quite a feat! So if someone who has spent enough time researching and writing that many books actually read MY book, it would be a true honor. I had a lot of trouble locating a picture of Rebecca Winters, but this one is on her website – and beside her tiny picture is the cover of her 150th book. 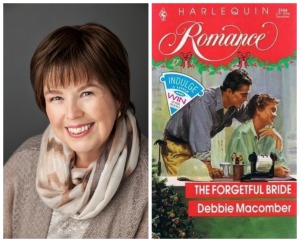 The Forgetful Bride is one of the first Debbie Macomber books I read.

Debbie Macomber is another prolific author I admire. Her books range from sweet to steamy. Many of her books are part of a series, often about large families. Like Rebecca Winters, her books are set in various locales, though most are in the United States. I admired the way she wrote entire series set in different locations: Washington state, Texas, California, and Alaska, among others. She also seems to share my love of hand crafts, especially knitting, and I read most of her Blossom Street series. I was delighted when some of her holiday stories were made into Hallmark movies, and when the Cedar Cove series appeared on television I watched every episode! Her success is truly an inspiration, so if she were to even hear my name, let alone read one of my titles, I’d be blown away.

So there’s my answer to this week’s question. If I could choose a celebrity to endorse my writing, it would be one of the romance authors who first inspired me to write.

During her first career, Patricia Kiyono taught elementary music, computer classes, elementary classrooms, and junior high social studies. She now teaches music education at the university level. She lives in southwest Michigan with her husband, not far from her five children, nine grandchildren (so far), and great-granddaughters. Current interests, aside from writing, include sewing, crocheting, scrapbooking, and music. A love of travel and an interest in faraway people inspires her to create stories about different cultures. Check out her sweet historical contemporary romances at her Amazon author page: http://www.amazon.com/Patricia-Kiyono/e/B0067PSM5C/
View all posts by Patricia Kiyono →
This entry was posted in authors, Books, Patricia Kiyono and tagged Debbie Macomber, endorsements, Rebecca Winters, series, settings. Bookmark the permalink.

6 Responses to Listen to the Experts