Though I no longer recall when I met Elizabeth, I think it was on the Author Group page for the publisher we share: Clean Reads [formerly Astraea Press]. But it may have been on the site where several of us sprint each week. Whichever… it seems like we’ve been colleagues and buddies for quite a while. And I’m glad she finally slowed down sufficiently for me to wrangle her into appearing for Hound Day here at 4F1H.

Award-winning author E.A. West is a lifelong lover of books and storytelling. In high school, she picked up her pen in a creative writing class and hasn’t laid it down yet. When she isn’t writing, she enjoys reading, knitting, and crocheting. She lives in Indiana with her family and a small zoo of pets.

A kilt-wearing hero, a guide dog, and a redhead — life’s about to get interesting. 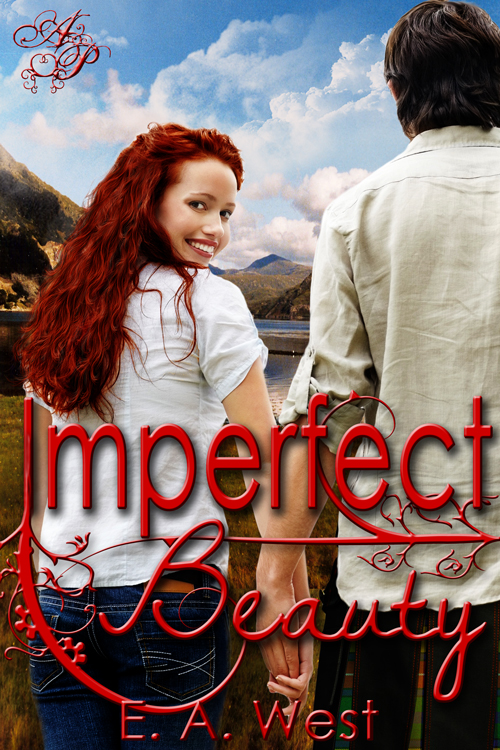 A visit to the Highland games goes awry for Alasdair Buchanan when his cousin abandons him in the crowd. His guide dog is terrible at describing the sights, but he does a great job of finding the river. Too bad Alasdair has no clue where that river is in relation to his cousin’s apartment.

When Trisha Wright stops to speak with him in her angelic voice, Alasdair is certain his cousin did him a favor by abandoning him. Trisha loves the Scot’s flirtatious ways and basks in his compliments, but she can’t shake the fear that he’ll hate her when he learns the truth about her—a truth everyone can see but him.

As they passed through a section of food booths, Alasdair stopped and sniffed the air. A smile curved his lips, sending Trisha’s heart into overdrive.

She inhaled but couldn’t identify which scent he meant. “Smell what?”

“Haggis.” He turned toward her, excitement lighting his features. The way his emerald eyes seemed to focus on her face sent a wave of nerves washing through her, and she had to remind herself he couldn’t see her. “What do ye think of getting some?”

She smiled and shook her head. Of course he was hungry. Her brothers had taught her a long time ago that males were always hungry. “You have to tell me what it is before I answer that.”

“’Tis a traditional Scottish meat dish. So, what do ye say?”

“That doesn’t sound too bad. Let me see if I can figure out who’s selling it.” She looked around and spotted the sign. “Okay, it looks like we need to go to that red-and-white striped tent.”

“Lead the way, lass, since I can’t see which tent that would be, and Foster never did learn his colors.”

Laughing, she guided him forward. She doubted she’d ever tire of his somewhat warped sense of humor. His ability to laugh about his limitations made her wish she could do the same. How much easier would life be if she could quit being self-conscious and crack jokes about ugly ducklings?

As they drew closer to the tent, she caught the scent of what could only be haggis. She’d never smelled anything like it, and she wasn’t sure why Alasdair seemed so excited about it. The strong scent of meat, spices, and onions was far from appetizing. When she saw what the vendor had in a heated glass case, her doubts grew even more.

“Good afternoon.” The robust man standing behind the makeshift counter smoothed his beefy hands over his white apron. “Can I interest you in a serving of the best haggis you’ll find in Fort Wayne?”

Trisha refrained from telling him she hoped it was the only haggis in Fort Wayne. The smooth lump with something grainy-looking spilling out of it was disgusting. “No, thank you, but I think my friend would like to try some.”

Alasdair chuckled. “Of course I would. It smells heavenly, just like the haggis at home.”

Had his sense of smell gone the way of his eyesight?

[E.A.W.] — I’ve always lived in Indiana. It’s where my family is from, going back several generations.

[E.A.W.] — I started out as a babysitter and provided child care for my church. I taught a drama class for a homeschool group, acted as facilitator for a local drama club, been a substitute teacher for a tiny private school, and taught art for one semester at the same school. I was a freelance writer for a while. Out of all of those jobs, I liked freelance writing the best.

[E.A.W.] — When I was a child, my parents encouraged me to explore everything that interested me. My insatiable curiosity led me in a variety of directions that developed into an eclectic set of interests.

[E.A.W.] — I blame it on my mom. LOL When I was little, we adopted a garter snake we found in the yard. A couple of years after that, she brought home a pair of baby painted turtles someone had given her. Throughout my childhood, we had lizards, newts, salamanders, and turtles. When I was a teenager, I saw an African water frog at the pet store and fell in love. At this point, I can’t imagine not having at least one swimming in an aquarium. My current pet snake, Miss Squiggles, came from my older brother. He captured her in his basement and gave her to me as a birthday present. I think it might have been a joke, but that skinny little six-inch snake was too cute. She’s close to three feet long now and has a big personality that provides regular amusement.

[E.A.W.] — My kindergarten teacher found out I could read, so she checked out books at a higher grade level and encouraged me to read them if I finished my assignments early. The librarians in my town also encouraged me by discussing the books I checked out and suggesting books I might enjoy.

[E.A.W.] — Perseverance, stubbornness, and willpower. Anytime a challenge comes up, I look for a solution and keep working on it until I overcome it.

[E.A.W.] — I’ve never really thought about it. Some authors have been writing since they were kids. Others started writing in adulthood. Some started writing around the time they retired from their previous careers. I’m not sure there is an average age to start writing. We all pick up our pens (or put our hands on our keyboards) when the time is right for us.

[E.A.W.] — I created Alasdair as a challenge to myself. Could I write a story without using sight to add details? It was difficult, but writing from the perspective of a blind man helped grow as an author. As for Trisha having something only Alasdair can’t see, that’s the result of my imagination going, “What if…?”

[E.A.W.] — I would probably still write the same mix of lengths and genres that I do now. I’ve spent my writing career so far writing the stories I want to write, and they always end up as long as they need to be.

[E.A.W.] — I’ve come across a few who don’t understand it, but the longer I write, the fewer of those people I encounter. Even some of those who had doubts in the beginning have come to see that I’m serious about writing and publishing my work.

[E.A.W.] — I would probably be an artist, most likely a painter. Before I started writing, I expressed my creativity with paint, markers, and colored pencils.

[E.A.W.] — Several readers have commented that they appreciated me including characters with disabilities in my books. They love seeing the world from a different perspective and seeing some of the challenges people with disabilities face.

[E.A.W.] — What made you decide to write characters with disabilities?

What is the most unusual pet you’ve ever owned?