Excerpt 2: Not Easy Being Android

Another excerpt from my newest novel

Last month, I posted the first excerpt for my newest release — my 15th fiction title — published by TouchPoint Romance in mid-February. Today, I wanted you to read another — the very beginning of the first chapter. Last month, I excerpted the teaser before Chapter One, because the reader already knows — from the title, tagline, and blurb — that Pennie Lane is a human impersonating an android. Problem is, Pennie doesn’t find out that’s her new (albeit brief) job until the middle of Chapter Five. 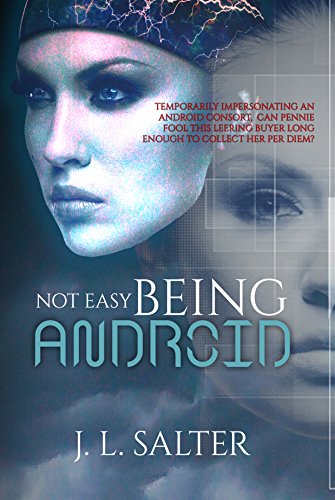 Excerpt from beginning of Chapter One

If the caller had not quickly mentioned my former faculty advisor, I would’ve hung up because I rarely converse with people from numbers I don’t recognize. But this was the third attempt from that same number in less than five minutes. So, I answered and listened, ready to disconnect quickly if it was a salesperson or robo-call.

That’s when she mentioned Dr. Covington, my revered faculty advisor, had provided her my name. “This is Elena Lavender at Delos Echo International. And we’d like to discuss a wonderful opportunity with you.”

With a fresh degree and certification in hand, I had just landed a position teaching fourth graders, beginning in about three weeks. “I’d be interested in hearing more about this opportunity, provided it’s not long term…”

She interrupted. “Oh, no, short term. Very brief. Probably only a day or so, in fact.”

I cooled immediately. A job for only a day could hardly generate enough money to justify the learning curve. “I don’t know…”

“You’ll find the compensation well worth your while.” As if she’d read my mind.

Interrupted again. “Not sales in the sense you’re probably thinking, but you will represent a product. And it will call upon your acting experience.”

So that was the connection to the chairperson of my former speech department. I’d had to beg to keep Dr. Covington as my faculty advisor after I’d switched my major to education. “So, you have some sort of performance or presentation in mind?”

“Actually, it’s both of those… and a bit more,” said Ms. Lavender cryptically.

“The interview has to be conducted at our Delos Echo premises. It’s, uh, important for a colleague of mine to be present as well.”

“Well, tell me a little more about the job and the pay, so I can decide whether to join your applicant pool.”

A long pause before she replied. “We’ll fill you in about the position when you interview, but I can tell you the compensation is in cash — one thousand per day.”

Thousand? “We are talking about dollars, right?”

She affirmed. “So, can we count on you for the interview tomorrow?”

“Absolutely, I’ll be there.”

Lavender provided the address — west side of Nashville — plus precise directions how to get to their complex and which of its several buildings to enter. “Ten o’clock, sharp.”

Ten should be easy enough, since the far side of Nashville was only about an hour away. I repeated all the particulars as I’d written them on a paper tablet. Then Lavender confirmed my info, gave me a final short instruction, and ended the call.

I sat at my small kitchen table staring at the $1000 figure I’d circled three times. Wow. I’d be willing to dig underwater ditches all day to earn that kind of money, since my student loan’s remaining balance could operate a small city for a year. Not to mention, I needed an entire wardrobe for teaching, unless my new school wouldn’t mind t-shirts, cutoffs, and flip-flops. And Lavender had implied there might even be an extra day available. Wow. Didn’t see that kind of money for part time jobs in Verdeville TN.

What kind of work could it be? Since it apparently linked to my acting ability — in some unspecified fashion — and involved performance, presentation, and something else, it had to be more than modeling… which I was not cut out for. I’m attractive enough, I suppose, but way too short at five-foot-five. And it’s not sales, thank goodness.

Well, my go-to resource in nearly every aspect of life was my best friend Arionna, so I called her. “Get over here, and bring that margarita mix. I’ve struck a gold mine.”

She sputtered, of course, but I knew she’d bust open my door in about 45 seconds because she lived only six apartments away in the same building. She was downstairs and I was up.

Amateur actress (and recent college grad) accepts a far-fetched, and high-paying assignment to impersonate a sophisticated android prototype for one full day. The actual floor model android has developed a last-minute glitch, but the evaluation by the billionaire buyer must go on. Can Pennie Lane fool the haughty, leering buyer long enough to collect her bountiful per diem?

9 Responses to Excerpt 2: Not Easy Being Android