The college semester ends in late April, and while I love teaching, there is that bothersome necessity of recording grades. Since my teaching load this past semester was larger than usual, that meant more grades to sort out, so I spent a lot of extra time away from things I like to do. Sewing projects piled up, my writing stalled, and my instruments sat in a corner when I needed to practice. But I made time to finish three awesome books by people familiar to at least a few of you. As I compiled these reviews, I realized that all three are part of a series. Mysti and MJ’s book is the last in their series, and the other two are the first. I’ve already purchased or pre-ordered all the rest of Kristin and Helen’s series, so you’ll hear more about these characters next time.

Least Likely Heiress by Kristin Wallace
This is the first in a new series by Kristin Wallace. I’ve enjoyed her earlier series, and the premise for this one is intriguing: three women from totally different backgrounds have been named as potential heiresses. In order to win the fortune, they need to engage in an unusual contest involving the town Founder’s Day celebration and a pampered pig. Each of the women agrees to the competition, but minor mishaps soon escalate into disasters, and it’s soon evident that someone doesn’t want the women to be successful. This book is about Cameron Reed, the attorney who’s assigned to oversee the competition, and Eve Bennett, granddaughter of the town founder’s mistress. Both major questions – the winner of the contest and the identity of the saboteur – are left unanswered until the end of the final book in the series, which is a major disappointment! But not enough of one to prevent me from ordering Book Two. 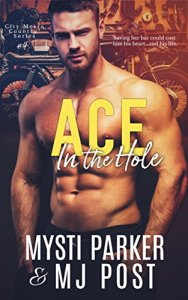 Ace in the Hole by Mysti Parker and MJ Post
I finished the fourth and final installment of the City Meets Country series, and like the others, this book delivered a well-written story with a compelling conflict, engaging characters, and a fiery romance. Ace is the tough-as-nails cousin of Harper (the heroine in book three), and he’s come to New York to help clear the troublesome riff-raff from the Hole, an evening hot spot owned by Harper’s landlady Sailor. But in doing so, he uncovers some unsavory truths about the property. Solving the mystery of who’s behind the bar’s problems takes them into some rough territory, and the action had me turning pages long after I should have been asleep. 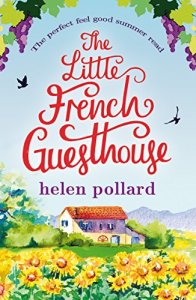 The Little French Guesthouse by Helen Pollard
This book has been on my Kindle app since it was first released, and I’m so glad I finally made the time to read it. What a lovely way to celebrate the beginning of spring! When the weather gets warm I get antsy to travel, and one of the ways I satisfy my wanderlust is by reading Helen Pollard’s lovely blog posts depicting her travels all about the UK, and various picturesque areas in Europe. This book is full of the flavor of rural France, and I loved reading about Emmy and her emotional growth. This book was new when Helen visited the blog two years ago, and she’s now added two sequels, which I’ve already downloaded and put in my reading queue.

During her first career, Patricia Kiyono taught elementary music, computer classes, elementary classrooms, and junior high social studies. She now teaches music education at the university level. She lives in southwest Michigan with her husband, not far from her five children, nine grandchildren (so far), and great-granddaughters. Current interests, aside from writing, include sewing, crocheting, scrapbooking, and music. A love of travel and an interest in faraway people inspires her to create stories about different cultures. Check out her sweet historical contemporary romances at her Amazon author page: http://www.amazon.com/Patricia-Kiyono/e/B0067PSM5C/
View all posts by Patricia Kiyono →
This entry was posted in book review, Books, Patricia Kiyono, reading, TBR List and tagged Ace in the Hole, Books in series, Helen Pollard, Kristin Wallace, Least Likely Heiress, MJ Post, Mysti Parker, The Little French Guesthouse. Bookmark the permalink.