I’m frantically working on completing a novella to be included in an anthology later this year. Right now it’s about 80 percent complete, so I’ll wait until it’s done to share more about it. For now, I’ll just let you know it’s a regency romance. Stay tuned!

Now, on to my reading list. Since my last review post, I’ve completed three books. Take a look to see if they might fit in your TBR pile:

All Jacked Up by Mysti Parker
Beach Pointe Romance, Book Three
This is a super-steamy addition to Mysti’s Beach Pointe series. Avery owns a bridal shop, but a shady landlord threatens to put her out of business with his rising rents. Her only hope is to win a photo contest in a bridal magazine. Unfortunately, the photos have to be of her wedding, and with a shortage of available and photogenic men, she decides to make a deal with Jack, the local playboy. Jack and Avery find they enjoy playing the part of a happily engaged couple, and they have to keep reminding themselves that the arrangement is temporary. As usual, Mysti has created a well-written, entertaining story with believable characters.

Summer at the Little French Guesthouse by Helen Pollard
La Cour de Roses, Book Three
Emmy, Rupert, Sophie, Bob, and the rest of the cast from the first two books return for Emmy and Alain’s wedding. An interesting the twist on the Bridezilla theme – this time the monster is Emmy’s mother, who insists on checking and double-checking every single detail of the wedding. In the meantime, Alain’s brother and sister-in-law are behaving strangely, some of their elderly friends are needing extra help, and one of her bridesmaids can’t fit into her dress! What else could go wrong? All this happens while the usual mix of quirky and loveable guests come and go. This is a lovely and satisfying ending to an enchanting series. 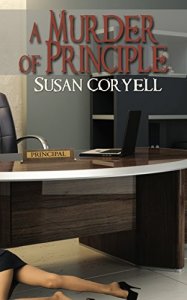 A Murder of Principle by Susan Coryell
Susan is a member of Authors Helping Authors, a very active author support group I belong to. I purchased the book because it’s set in a public school, a setting I know well. I assumed I’d relate to the setting and characters. The situation is one common to many school communities: a beloved administrator leaves, and the new principal comes in and makes sweeping changes that no one likes. I’ve been there, so I read the book. But the evil this woman spread was so horrible I can’t see how she was able to remain in the job for an entire school year! If a principal in my part of the country did half the things Wendy Storme did, she would have been ousted and prosecuted. The local news outlets would have had a frenzy with the complaints from teachers, support staff, parents, and students. Another thing that puzzled me was that the superintendent should have at least heard about some of these things, but when told about them at the end of the book, he acted surprised. Why hadn’t anyone made it a point to tell him earlier? The book has received nothing but five-star reviews and glowing recommendations, so I was hesitant to leave my thoughts at Goodreads – but I did.

What have you read lately?

During her first career, Patricia Kiyono taught elementary music, computer classes, elementary classrooms, and junior high social studies. She now teaches music education at the university level. She lives in southwest Michigan with her husband, not far from her five children, nine grandchildren (so far), and great-granddaughters. Current interests, aside from writing, include sewing, crocheting, scrapbooking, and music. A love of travel and an interest in faraway people inspires her to create stories about different cultures. Check out her sweet historical contemporary romances at her Amazon author page: http://www.amazon.com/Patricia-Kiyono/e/B0067PSM5C/
View all posts by Patricia Kiyono →
This entry was posted in book review, Books, Patricia Kiyono, TBR List and tagged A Murder of Principle, All Jacked Up, Beach Pointe Romance, Helen Pollard, La Cour de Roses, Mysti Parker, Summer at the Little French Guesthouse, Susan Coryell. Bookmark the permalink.