… or That I Thought I Wanted

Difficult to know exactly where to start with this topic, so I’ll go ahead and shock everybody. When I was a teen, I thought I wanted a pet baby chimpanzee, because I perceived they were chick magnets. Before you jump to the obvious conclusion that it was too far-fetched, let me explain that my mom (before, during, and after my teen years) worked at the Delta Regional Primate Center (just outside Covington LA). Among her many assignments there was the care and feeding of brand new baby chimps… just arrived at the lab after the ordeal of their travel from overseas. So I actually did have some exposure to various primates, including chimps. Had I ever gone through with this plan, however, the chimp would’ve had to wear a diaper constantly, because they’re terribly messy with their natural functions. Also, my “fostering” of that baby would have ended after a few months, because chimps grow quickly, become quite adventurous, and are incredibly strong. 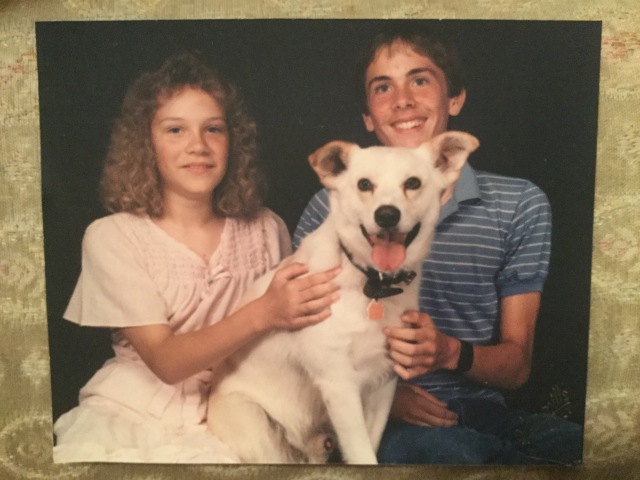 I’ll jump ahead to the pet who was the highlight of our years as a young family in Bossier City LA — Rascal. Razz was both inside and outside dog and (literally) slept on top of his dog house in fair weather. In bad weather, we pulled the dog house up on the back porch and packed it with hay and it was toasty warm. Razz-a-ma-tazz – also known as Spazz – could do numerous tricks, including an assisted back flip. He also did several impressions, including “motorcycle dog” and “little old lady”. One of his specialties was when all four of us would huddle on our hands and knees in the narrow hallway and Rascal would run back and forth, leaping over our pile of bodies as though he were a canine Evel Kneival.

During those years when we still had two kids at home, we also had ducklings, kittens, a cat that got pregnant, a little dog named Rags (or maybe Rugs), more ducks, rabbits, and (of course), Julie’s dog Sugar (who growled at anyone entering Julie’s room).

When I was young

When I was a kid living at home, our long time pet was Spottie, a fox terrier who was more like another sibling than a dog. She also went by the names Paahoo, Paahooweehaawoo, and Puppy Sue. Her main “trick” (if you could call it that) was that when we arrived home from being somewhere, Spottie would drag her tummy in the warm grass and we would all cheer her on as if she were performing a feat of canine gymnastics. “Do puddy” we would exclaim… and Spottie would drag her tummy all over the back yard. She lived a good long life (of a dozen years or more) and died in the sun as she napped.

During our year in Iowa, my sister adopted a dog which had been somewhat neglected (at least in terms of affection) by the neighbors. Once those neighbors figured out their dog was actually living at our house, they formally transferred ownership (and the responsibility for feeding). I forget her original name, but Becky re-named her Jennie. My brother, however, referred to the dog as Bennie. He would croon to her, “Bennie is so ugly… ugly, ugly, little Bennie” and the little dog would wag and smile and just luxuriate in all the attention. [No, the words did not bother Bennie/Jennie… because my brother’s tone was so soothing.] At some point in this period, I acquired a stray kitten initially given to my sister when she was briefly in the hospital. But Thomas later adopted our Dad as his primary human.

During those kid years, I also had a pet snake, a few goldfish, and a white rabbit — though not all at the same time. Along the way, I raised about half a dozen baby chicks into adults… and bred several generations of hamsters.

When I was no longer a kid, but still linked to the home place in Covington LA, we had several other dogs about. One was a real character named Spock (first known as Ace and later as Spock-a-doodle)… another was a true water dog named Bangus (also known as Bangoose and Bangus McGregor). Somewhere in there was my sister’s Basset Hound named Nabby (whom my Dad nick-named Nabigail Van Buren).

In the late fall of 2001, my wife acquired a male kitten from a Bossier City pound. Its original purpose was to keep the mouse population under control at her place of work. However, that cat, originally named C.I.P. (later changed to SIP, then Sipper or Sipcat… and finally King Sipper) soon became too friendly with the other employees. After jumping up on someone’s desk a few too many times, Sipper was banished from that workplace and came to live with us at home. He lived a long life, attaining over 16.5 years, and died about ten days ago (after a long struggle with his thyroid).

Belle was the little terrier with the bat-wing ears — that Denise bought for $10 from the Wal-Mart parking lot soon after her arrival in Somerset (mid 2006). Belle must have been part gazelle, the way she leapt through the tall hay in the meadows. She would catch mice, moles, and other little critters and toss them in the air (and catch them in her mouth). Before we had a pet door installed, Belle would be out in the front porch leaping up and down high enough that I could see her over the half door. Then I’d let her back inside — it was her form of ringing a doorbell, I guess. Belle came to an untimely end at about age seven after an attack by another dog.

Sipper and Belle were contemporaries and had a truce, more-or-less. While Belle was still living, our family was joined by another rescue dog, Bojangles. The two of them would play a seemingly endless game of chase while out-of-doors. Once inside, however, they napped together peacefully. Bo is now getting on in years, the gray fur on his face showing more and more gray. But he can still run on those short little legs.

What about YOU? What pets have you had? Have there been any that you thought you really wanted… but haven’t gotten (yet)?

15 Responses to Unusual Pets I’ve Had