Last week I told you a bit about Protecting the Dead, the urban fantasy novel by debut author Katherine Gilbert. Katherine is a native of South Carolina, and since that’s one of the few US states I haven’t visited, we’ve only “met” through electronic means. We share a publisher, so we’ve been exchanging information about marketing opportunities and the ins and outs of social media.

Protecting the Dead takes place in an apartment complex set in Decatur, GA in which half of the units are occupied by “good” characters aligned with the Head Angel Geoffrey, and the other half answer to the Head Demon, Damian. Since I’m always curious about characters and settings that are new to me, and since most of us write romance, I asked Katherine to tell us about the romantic element in her book. She kindly responded, so I’ll turn the blog over to her:

I always like romances best when the hero is someone I can fully like and even admire. That may well be why Geoffrey, the hero of my paranormal romance novel, Protecting the Dead, is an actual angel who is helping to protect and heal the supernatural beings who need him. Lydia, the heroine, has a deep connection with him from a past she doesn’t consciously remember. However, given the truly evil childhood she’s endured, she has many insecurities which threaten to undermine their relationship before it starts. Overall, it’s about the journey so many people have to go through in their lives, where they must first learn to accept and love themselves, before they’re capable of being there fully for someone else.

To give you a little taste, here’s a part where Lydia has just collapsed after confronting one of the minions working with the creature who is still after her. She’s lying with her head on Geoffrey’s lap, as she recovers. They’re being questioned by Glory, one of his angelic colleagues:

To Lydia’s surprise, Geoffrey didn’t seem the least bit apologetic. “She banished him.” His eyes were surprisingly dark, when she turned back to watch him. “Damian deserved it.”

“Wait. I what?” Lydia wondered.

“Shh,” Glory commanded before glaring back at Geoffrey. Clearly, Lydia was entirely secondary to the conversation. “Care to explain that again?”

Lydia wanted to second that request but had the sense to stay quiet. She turned her head, watching Geoffrey. “I said she banished him.” His eyes burned. “He was trying to renew the demon mark.”

That wasn’t anything she didn’t know already, but it made Lydia shudder, nonetheless. It took a second to really focus on Glory, whose worried look moved back and forth between the pair on the couch, her eyes narrowing. “Did he succeed?”

Geoffrey’s hand was underneath Lydia, warm against her back, his eyes still bold. She knew he was renewing his own mark, her whole body heating, healing. “No one will.” He looked down to her tenderly. “Not while I exist.”

It was a lovely moment, his gaze saying so much. Lydia barely dared to hope that any of the messages she imagined were real.

The intensity was broken by a small, “Hmph,” from Glory. When Lydia glanced back, Glory had propped herself onto the side of a large chair, her arms crossed, as she watched Geoffrey sarcastically. “All right, Romeo. And where were you? Jerusalem?”

This seemed to be an old joke between the pair, even if there wasn’t much humor there now. Strangely, too, Lydia realized that she already knew the answer. “He was with me. He was beside me the entire time.”

It was what had given her the strength, she was sure, to rebel against the demon. Something inside her sank. Just like with Lyle, that one night. He, too, had reminded her that she could be herself, his presence making her realize that there might indeed be a future outside of Hell. Geoffrey’s look soured slightly, possibly as a result of the head angel’s increased glowering, and Lydia winced, glancing back at her boss, her voice becoming smaller. “Or should I just shut up now?”

To her surprise, Geoffrey smiled, the look warming her in any number of ways.

Strangely, Glory seemed a bit more satisfied, finally relaxing, as she stood up. But whatever acknowledgment she might have given was more than a little lost on Lydia. She only caught the sound of the door closing, Geoffrey kissing slowly along her face. Suddenly, she wasn’t so sure that her hopes were all that foolish.

There were still a lot of questions, her mind struggling to voice them. “G-Geoffrey,” she managed, just as his lips kissed a soft, tender spot along her neck. But the groan she let out was echoed every bit as loudly in the angel.

She didn’t have a second to analyze — or doubt — after that, soon caught in a kiss unlike any she had even imagined before. It wasn’t chaste, wasn’t subtle. It was more a plea from the angel’s deepest soul.

The intensity of the connection had her spellbound, incapable of focusing anywhere else. It wasn’t anything like she had experienced that one night with Lyle, his most fervid kisses seeming paltry and meaningless in comparison. This touch lit her soul, made her recognize a bond far beyond any she could explain, one that existed on both the most expressively physical and achingly spiritual levels. It wasn’t the kiss of someone assigned to look after her or someone who had only a general interest in her welfare, was utterly giving and incredibly possessive, all at once. And it made her wonder, for the very first time, whether it was possible that she might be supposed to know true love.

She had rather lost track of time when the angel finally pulled away, his fingers now stroking lightly over her throat. She sat up, facing him, as he held onto her hand. His eyes were burning, not giving her time to question or doubt. “I am not Lyle,” he whispered fiercely before pulling her back in to him for one more deep, singeing kiss. He seemed to force himself away from her only by sheer will. “Don’t ever think that…”

Here’s the Blurb for Protecting the Dead:
After a childhood filled with demons and her devil-worshiping parents, Lydia longs for a quiet, normal life, a safe haven somewhere blissfully dull. Being the manager at the Roanoke Apartments seems to fit that bill. But Lydia soon learns that you can’t leave the past behind so easily. She finds herself faced with unclogging drains for werewolves, conducting nightly vampire counseling sessions, and caring for two talkative cats. Then there’s the distraction of Geoffrey, the hottest, and most angelic, boss anyone ever dreamed of. As if that isn’t enough, the demon who nearly killed her shows up to finish the job. So much for a peaceful, simple life…

You can find Protecting the Dead on Amazon, Barnes and Noble, Smashwords, Kobo, and iTunes. 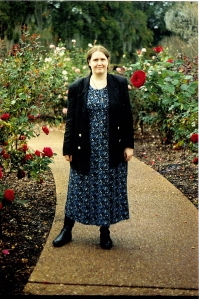 Katherine’s Bio
Katherine Gilbert was born at house number 1313 and then transplanted to a crumbling antebellum ruin so gothic that The Munsters would have run from it. She has since gained several ridiculously-impractical degrees in English, Religious Studies, and Women’s Studies. She now teaches at a South Carolina community college, where all her students think, correctly, that she is very, very strange, indeed

You can find Katherine on Facebook, Goodreads, and on Amazon.

During her first career, Patricia Kiyono taught elementary music, computer classes, elementary classrooms, and junior high social studies. She now teaches music education at the university level. She lives in southwest Michigan with her husband, not far from her five children, nine grandchildren (so far), and great-granddaughters. Current interests, aside from writing, include sewing, crocheting, scrapbooking, and music. A love of travel and an interest in faraway people inspires her to create stories about different cultures. Check out her sweet historical contemporary romances at her Amazon author page: http://www.amazon.com/Patricia-Kiyono/e/B0067PSM5C/
View all posts by Patricia Kiyono →
This entry was posted in authors, Guest author post, Miscellaneous and tagged heroes, Katherine Gilbert, paranormal romance, Protecting the Dead, Urban Fantasy. Bookmark the permalink.

8 Responses to Guest Author: Katherine Gilbert and Protecting the Dead