A Few of My Favorite Things

I posed this week’s question: Do you still have any of your old toys?

I’m sentimental. I’d have more, if they had not been left in storage in another state by a relative of mine, and a few that were thrown out for good reasons and bad, but I do have several. 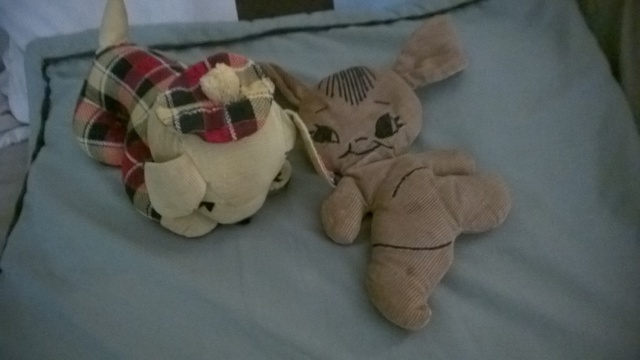 The Scottie dog I have had most of my life. In  fact, I cannot recall ever not having him. Family legend has it that we all went shopping when I was about 2, and it was love at first sight. I would not leave the store without it.

I take that story with a grain of salt; if it’s true, it was the one and only time I got something I wanted. I learned at a very young age that I should not even bother to ask, because I was setting myself up for a let-down. All I can think of is that it probably happened near my birthday.

The bunny was made for me by an aunt-by-marriage when I was about 6. She had gotten a fancy (for the time) new zig-zag sewing machine and tried her hand at making something new. As you can see, she was quite a seamstress. We only lived near each other for a few years, but I also got the benefit of her talents in other ways. She made lovely dresses for her daughter, who was nearly two years older than I, and I welcomed the lovely hand-me-downs.

These take some explanation. They are not toys per se; they are pajama bags. 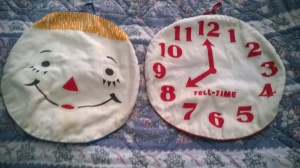 The pajamas were made of the same material as the backs: 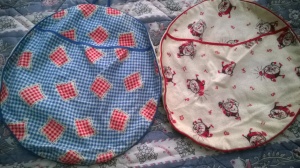 I can still remember that the PJs were incredibly comfortable and while I was sick,(a lot), I lived in them. I could not have been older than 6 when my mother bought them. Why did I hang on to the bags?
They glow in the dark! 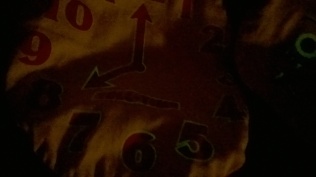 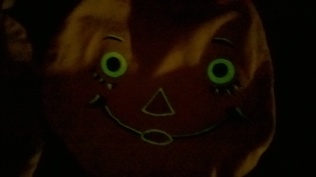 The clock never glowed as strongly as Raggedy Ann and it is finally giving up the ghost; no matter how much light, there is now a faint glow for only a few moments. The Raggedy Ann takes a lot more light that it once did to work, and it doesn’t last very long, either, but she still has quite a glow. If you consider that  I just turned 64, they were probably made 60 years ago, it is amazing that they glow at all.

And where would we be without books? Again, most of mine were lost and it still hurts. Almost all are irreplaceable; I’ve tried. Some were reissued by their publishers in ‘updated’ versions, which ruined their charm and destroyed their lovely illustrations. However, this book has been with me since I was 8:

Joan Walsh Anglund’s “A Friend Is Someone Who Likes You”. My mother saw it as she was working my school’s book fair and thought it was perfect for me. It is written for lonely children. It advises that you can find friends sometimes if you look, but even the wind can be your friend, a brook, a tree a white mouse, and of course, a book can be your friend.
It didn’t edify me; it made me sadder, but I loved the illustrations and even back then, I knew that my mother and Ms. Anglund meant well.

I’ve kept some of my kids’ and grandkids’ toys, but I have given more away. Almost all were in very good shape, and why shouldn’t other kids love them and have fun with them?

However, many of the stuffed animals that belonged to my sons are still here, along with a few other toys. I still keep some Barbie things that belong to my granddaughters, (which they have grown beyond). And I don’t think I will ever part with the musical Pooh Bear that used to put my grandson to sleep;( I may start playing it for myself!)

If the kids ever want these, they know where to come.

Tonette was a once-fledgling lyricists-bookkeeper, turned cook/baker/restaurateur and is now exploring different writing venues,(with a stage play recently completed). She has had poetry and nonfiction articles published in the last few years. Tonette has been married to her only serious boyfriend for more than thirty years and she is, as one person described her, family-oriented almost to a fault. Never mind how others have described her, she is,(shall we say), a sometime traditionalist of eclectic tastes.She has another blog : "Tonette Joyce:Food,Friends,Family" here at WordPress.She and guests share tips and recipes for easy entertaining and helps people to be ready for almost anything.
View all posts by Tonette Joyce →
This entry was posted in authors, Books, childhood, Family, memories, Miscellaneous, Tonette Joyce and tagged "A Friend Is Someone Who Likes You", "Glow-in-the-Dark, Barbies, Children's books, gifts, Joan, Joan Walsh Anglund, pajama bags, Pajamas, Raggedy Ann, sentimentality, stuffed animals, toys. Bookmark the permalink.

11 Responses to A Few of My Favorite Things