Don’t get me wrong. It’s not that I positively HATE winter. It’s just that it takes me a few minutes to “warm” to the process of identifying the few things I LIKE about it.

When I spotted the topic for this week, it seemed rather familiar… even though we probably haven’t covered the winter season in this particular regard.

[See below for links to Hound Day blogs that MENTION winter.]

So this catches me “cold” and forces me to apply new thinking to the matter.

As many of you will know – either from posts here on 4F1H or elsewhere – I spent most of a year stationed at an air base in the Arctic. Prior that that remote tour, I don’t recall being particularly affected by cold weather — though (to be fair) except for two years in Chicago and one year in Iowa, I hadn’t actually lived in a northerly clime before that point.

Here’s a look at Thule Air Base, in N.W. Greenland… which may show you why cold weather made such an impact on me. 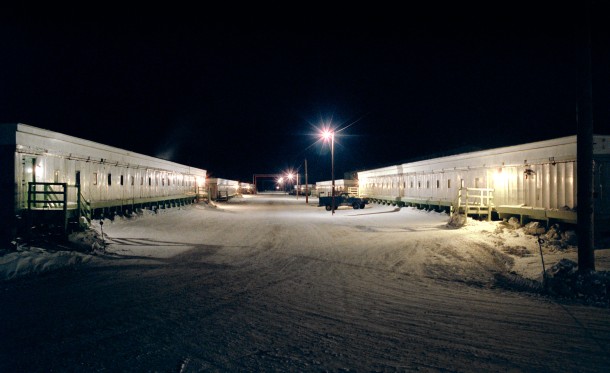 A typical “street” at Thule Air Base. Those are barracks on either side. During the deepest part of winter there were some 12 weeks of “Arctic Night” during which the sun never appeared above the horizon.

Kentucky, where I’ve lived these dozen years since retiring, has an honest-to-goodness cold winter, but it’s mainly the perils of driving on snow and ice – and at least once each winter getting snowed-in to the point that we can’t even reach the road – that worry me.

The temperature itself – here in KY – has not been the main issue… since 35 degrees here feels a LOT warmer than the same thermometer reading in high-humidity Louisiana (where I lived for much of four decades). [Based on the type outer wear I use here, compared to what I wore in LA for the same thermometer reading, I’d say the same reading feels about 20 degrees warmer here, in lower-humidity KY.]

But this background has been mainly a “warm-up” — I’m here to relate what I LIKE about winter. My list is short, but sincere — I like (or love, if I may say it):

The LOOK of winter,

The crisp, clean SMELL of winter,

The peaceful SILENCE of winter,

The things one can DO in winter that can’t be done any other time (like sledding, building snow forts, etc).

The way hot chocolate TASTES and feels… only when your body is especially chilled. [And speaking of taste, have you noticed that chili and gumbo – among other dishes – actually taste better during cold weather?]

And here are those other – somewhat related – blogs I mentioned earlier:

How I feel about winter

Would I prefer a warmer climate?