She Thinks He Has the Itch

that Jason is Scratching his Itch with Another Woman

We’re in the final full week of the year and it’s been a while since I’ve used a “free week” to tell you about any of my three screwball comedies. Though this story figures as a PREquel to “Curing the Uncommon Man-Cold,” I actually wrote ITCH immediately after I’d completed Man-Cold. By that point — roughly 12 months of concentrated writing — I was VERY familiar with the shared characters and was really having fun with all they were going through. In some places — all modesty aside — I was chuckling as I wrote scenes.

The prequel to “Curing the Uncommon Man-Cold”

Part of the Amanda Moore or Less Series

Amanda can’t believe her new lover is already cheating, despite “proof” from her domineering older friend. But she reluctantly complies with this posse of amateur investigators to determine whether Jason does have the seven-month itch… and which tramp might be scratching it. 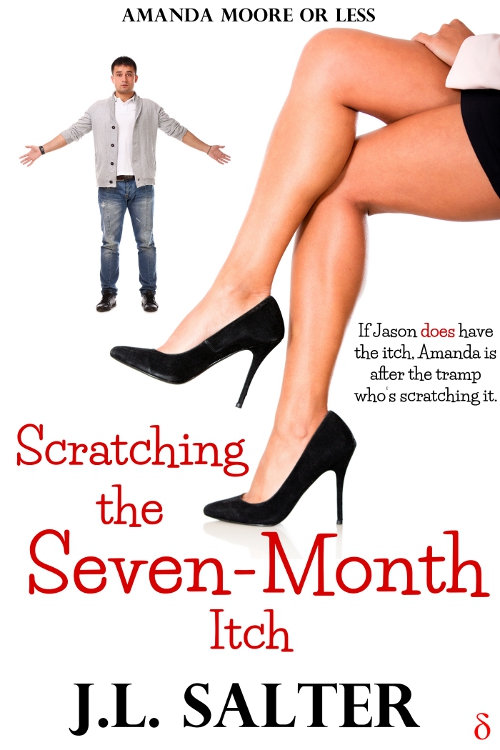 Amanda can’t believe Jason, her new lover, is already cheating — they’ve only been a couple for seven months. But her domineering older friend, Christine, has “proof” and insists Amanda should take it seriously. Knowing Jason spoke with a woman in the mall food court and another in the grocery store isn’t exactly an iron-clad case.

But when she hears rumors about a different woman stalking Jason at his workplace, Amanda reluctantly finds the evidence sufficient to allow her boyfriend to be tailed… provided Christine and her posse of amateur detectives can be discreet. Unfortunately, Christine’s idea of discretion is akin to blowing up a billboard.

The more Amanda learns about Jason’s unusual behavior, the more their recently shaky communication crumbles. Unable to resist the momentum of the mounting case, Amanda joins the investigation and stakeout.

Does Jason have the seven-month itch? If he does, which tramp might be scratching it? And is it remotely possible for their relationship to grow even closer despite the clumsiest surveillance efforts bossy Christine can devise?

8 Responses to She Thinks He Has the Itch