Posted on February 4, 2019 by Patricia Kiyono

My guest this month is a fellow member of the Authors Helping Authors group, or AHA. We assist each other by getting the word out about our books, by tweeting, posting, or blogging about them. We also turn to each other for writing advice. Linda Carroll-Bradd is one member who is consistently aiding others in many ways. Like me, she writes sweet historical novel, but most of hers are set in the American West. Her newest release is quite different, and I asked her to share a bit about the background behind Freedom’s Path. She kindly obliged, so I’ll turn this space over to her.

Quilts and The Underground Railroad
By Linda Carroll-Bradd

From the moment Africans were put onto slave ships in their native country, they probably thought of ways to escape. Imagine being torn from everything and everyone you knew and loved and being transported across an ocean and deposited into an unfamiliar land. Through many years, enslaved people worked to figure out how to escape. Probably more important was the destination. All their efforts would have been for naught if they didn’t reach a place where slavery didn’t exist.

My recent release, Freedom’s Path, deals with one of the ways escaping slaves received guidance. An acknowledged pioneer of the Underground Railroad was Isaac T. Hopper who helped slaves in Pennsylvania and New York as early as 1787. The Fugitive Slave Law of 1793 or the ordinance written into the U.S. Constitution or legislation enacted by individual states (Vermont abolished slavery in 1777 when the state was created with land split off from New York) often spurred citizens who disagreed to become involved. The area served on the U.R. was huge, encompassing any land between the southern states and the Canadian border that lay east of the Mississippi River. What I found interesting as I researched the subject was that the routes took many forms. Some were actual underground rail cars that had been abandoned from mines. Other routes involved railroad cars or by river or by sea. Many involved the escapees walking the entire way and being hidden in barns, root cellars, ice houses, and caves.

A method for signaling the escaping slaves on the direction of the route was the use of certain quilts hung over a fence or on a clothesline. In preparation on the plantation before an escape was made, a poem was learned about what quilt patterns to look for and what each meant. In conjunction, many plantation blacksmiths were involved in sending messages through the beats they made with a hammer on their anvil. (a familiar messaging system used in their native African countries)

Risks abounded for both escaping slaves and those who aided their escape. I hope I’ve piqued your interest in the subject enough to pick up a copy of Freedom’s Path so you can learn about an individual who served as an agent on The Underground Railroad. 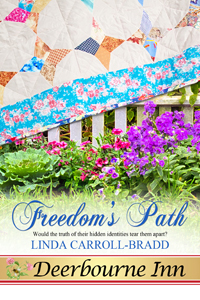 Blurb for Freedom’s Path:
Working at the Deerbourne Inn provides Sidonie Demers the perfect cover for helping on the Underground Railroad. The quilt patterns she selects direct escaping slaves to the safest route. The cause is personal for octoroon Sidonie whose mother and grandmother escaped bondage years earlier.

The attraction is irresistible, but what happens when their true identities are revealed?

Look for Linda Carroll-Bradd at her blog and on Facebook, Twitter, Goodreads, Amazon, and Bookbub. Sign up for her Newsletter to learn more about her and her current work!

Linda is offering an ecopy of Freedom’s Path to one person who leaves a comment.

During her first career, Patricia Kiyono taught elementary music, computer classes, elementary classrooms, and junior high social studies. She now teaches music education at the university level. She lives in southwest Michigan with her husband, not far from her five children, nine grandchildren (so far), and great-granddaughters. Current interests, aside from writing, include sewing, crocheting, scrapbooking, and music. A love of travel and an interest in faraway people inspires her to create stories about different cultures. Check out her sweet historical contemporary romances at her Amazon author page: http://www.amazon.com/Patricia-Kiyono/e/B0067PSM5C/
View all posts by Patricia Kiyono →
This entry was posted in America, Guest author, Guest author post, history, inspirational people, New Release, Patricia Kiyono, romance and tagged Freedom's Path, Linda Carroll-Bradd, Quilts, The Underground Railroad. Bookmark the permalink.