When You’re NOT the Star

Let me start with a few comments about “unsung” characters in movies and popular fiction… before I discuss a few of my own characters who fit that description.

As some of you (who’ve read my blogs here or my posts on Facebook) already know, I love movies from the 1930s and 1940s… especially comedies. In more examples than I could begin listing, most of those great “oldie” comedies got a significant amount of their humor NOT from the leading lady or leading man… but from one (or more) of the supporting players. It was often an uncle or an aunt, or a housekeeper or a butler, or maybe just a friend — but if you went through that movie and deleted those scenes, the story simply wouldn’t have any life whatsoever.

Lucille Ball played this role – the wise-cracking sidekick – in several films before she became a TV star and movie headliner. As merely one example, consider her role in 1945’s “Without Love” — where she was in a supporting role for the headliners, Spencer Tracy and Katharine Hepburn. Eve Arden played this type role so many times in different movies that I can’t even think of any specific titles, except 1937’s “Stage Door.” 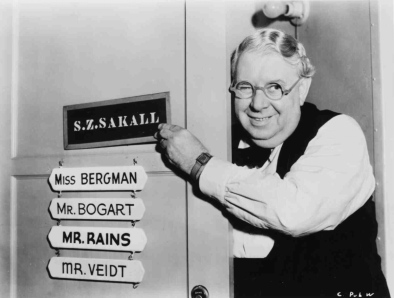 One of my favorite male actors – always (that I can recall) in a supporting role and never the main star – who dished out innumerable witty observations and irreverent comments… was S. Z. Sakall. To capture the essence of the type role he played MANY times, look no further than 1945’s “Christmas in Connecticut” — which starred Barbara Stanwyck and Dennis Morgan. Sakall’s performance as Uncle Felix steals the show for me.

Remember the 1950s craze over Davy Crockett? Those Disney movies would have fallen quite flat if not for the wry involvement of Davy’s sidekick George Russel… ably played by Buddy Ebsen. [A hero usually appears a lot more courageous when paired with a mild-mannered (or even reluctant) partner.] And John Wayne – bless his heart – was NOT a terrific actor and couldn’t really carry a film… without his several character players. One face you’ll see over and over again in a movie with the Duke is Victor McLaglen.

The Monday Fox kindly mentioned one of the major supporting players from my 2018 novel, “Double Down Trouble.” That man – whom I named Gregorio Rodriguez – goes by the nickname Viejo in the story. He’s a WW2 vet now in a wheelchair, in an assisted living home… now under attack. I loved being able to feature a member of the Greatest Generation, who’d been in the thick of the fighting during WW2 — in his case, in Italy, as I recall — and not only survived but prevailed. And I also found it gratifying that he doesn’t let his current circumstances (wheelchair) stop him from anything except stairs. Without Viejo’s material assistance and guidance, Julia Temple and Doc Holliday might not survive their afternoon.

Another of my favorite supporting players (from my own stories) is Eric Prima, who first appeared – in just two or three scenes (as I recall) – in “Rescued By That New Guy In Town.” He plays Kristen’s laid back, good-ole-boy brother — with gut wisdom far beyond his learnin’, as people used to say. I enjoyed writing Eric’s small (but significant) part so much that I brought him back for a more substantial role in my story, “One Simple Favor.” In that second appearance, the only character from the earlier novel is his girlfriend Velma — Eric now has third billing to the heroine (Tricia Pilgrim) and the mysterious hero (Michael).

As my last example of supporting players that I’ve really enjoyed creating, let me point to Margaret Stewart, who is the mother of the stubborn boyfriend in “Curing the Uncommon Man-Cold.” In that screwball comedy, I needed a wise (but witty) voice of reason to help nudge Jason into reality, to help Amanda Moore retain some of her sanity, and to assist both hero and heroine into realizing how much they truly did love each other.

Who’s your favorite “supporting” character? Do you consider her/him an “unsung hero”?

18 Responses to When You’re NOT the Star