At closing time, a therapist in a small town social services facility is pressured to assist a stranger who’s dressed as an 1880s cowboy, acts like one, and seems to think that’s where he was until he woke up this morning.

I no longer recall exactly HOW this idea sprang to mind, but my notes indicate that I fleshed out the concept on June 20, last year. I finished the first draft — some 45,000 words — on July 29, which represented 27 actual writing days. Thereafter, I took it through four more drafts — and three beta readers — before I submitted the story to Clean Reads, where nine other fiction titles have found a wonderful home. By October, I had a contract in my hands.
The sixth draft began the editing process, which included content edits, line edits, proof-reading, and proofing the galleys. None of this detail is news to my author friends, but I suspect most non-authors have relatively little idea of how much work goes into creating the product they later hold in their hands or view on their E-devices.
One of the more exciting aspects of this project (for me) is that I was already drafting the SEQUEL in August last year… and have resumed work on that sequel just this very month. 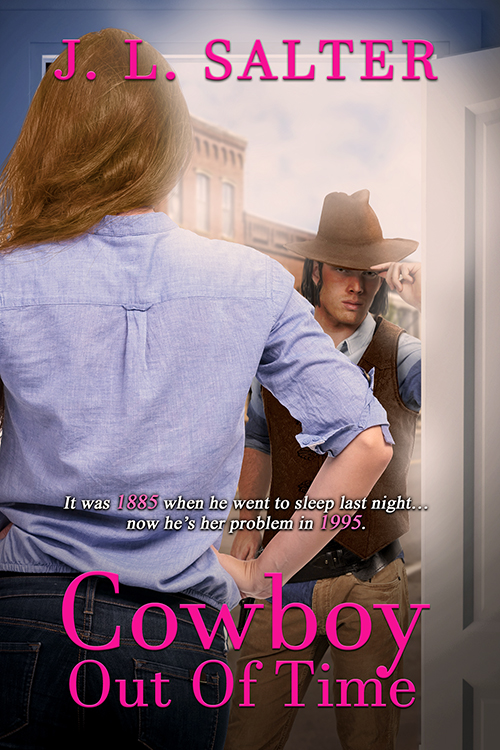 Amanda Matthews created my beautiful cover — her fourth for my stories.

Dumped in my lap at a few minutes before five o’clock on Friday — the deputy wants to drop off a confused wanderer? Our Social Services aren’t equipped to handle a tall, rustic cowboy who looks like he just stepped out of a movie Western… dust included.

But the deputy’s gone and the cowboy is suddenly my responsibility. Or is it the other way around? Hunt Weston announces he’s come here to protect me! From what or whom, he doesn’t know. But he’s come a long way… in both distance and time. Yeah, this Weston character claims when he went to sleep last night, it was 1885. That’s a hundred years ago.

No ID, no proof of his claims — unless you count the authentic vintage clothing and that original Colt Peacemaker strapped to his hip. Other than his gun and a rugged Bowie knife, this cowboy’s only possessions are 32 silver dollars… all minted before 1885. And the only documentation he possesses is a torn half of a playing card… with my name, this town and county, and the date October 6 — two days from now.

Weston can’t explain anything… indeed, he doesn’t understand it himself. In fact, if anyone had tried to convince him that he’d traveled 100 years overnight, he would’ve laughed in their face. But here he is… sent by a mysterious stranger to protect me, Elvira Rose Roamer.

Oh, did I mention that when Weston saw the name, Elvira Rose, on the top half of that card, he thought he was being sent to protect my great-great-grandmother, Elvira Rose Bolling — whom he’d met and grown fond of… back in 1885?

NOTE: Not certain how long this will last, but presently, this book is FREE if you have Kindle Unlimited!