The Man Who Epitomized Army Rangers

The Story of Col. Darby and his Rangers in WW2

The official title of this military history is “Onward We Charge: The Heroic Story of Darby’s Rangers in World War II.” And it’s an eye-opener, even for someone like me who reads voraciously about WW2.

Before we get to the nitty-gritty, let’s see how many units we can name which were more commonly known by their commander’s name (than by their official designation). You’ll probably recognize Merrill’s Marauders (Army long range penetration unit in Burma) and Doolittle’s Raiders (B-25 bombers over Tokyo). Maybe you’ve heard of Edson’s Raiders (1st Marines) and Carlson’s Raiders (2nd Marines) — both in the Pacific and both deactivated in early 1944. Right up with those stellar names is the multi-battalion unit known as Darby’s Rangers.

If all you know about Darby’s Rangers is what you saw in the 1958 James Garner movie, then you’ve been considerably misinformed. And if you assumed Darby’s Raiders were the ones who scaled Pointe-du-Hoc during D-Day at Normandy… you’re also wrong — those Rangers were in Second Battalion. Furthermore, if you think Capt. Miller (played by Tom Hanks in the 1998 movie about Private Ryan) was assigned to one of Darby’s units, you’d also be wrong — the fictional Miller character was in the Second Ranger Battalion.

Bill Darby commanded the First, Third, and Fourth Rangers (though not usually all at the same time). In mid 1943, Patton offered Darby a promotion and command of an infantry regiment, but Darby declined — he didn’t want to abandon his Rangers. Later that same year, Darby tried to form a Ranger Regiment, but that request was denied by Eisenhower. 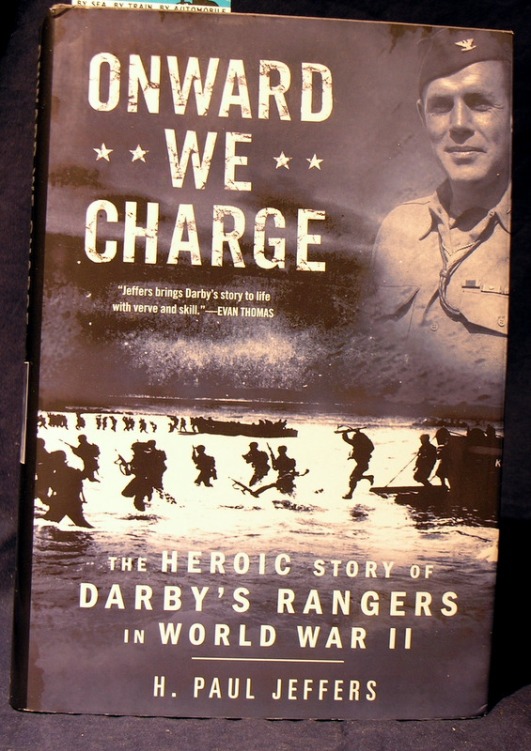 The author, H. Paul Jeffers, has done marvelous job of weaving together Darby’s early life and career, his involvement in the formation and training of First Rangers, and the 12 major battles undertaken by one or more of Darby’s battalions in North Africa, Sicily, and Italy.

The Ranger units were modeled after Britain’s Commandos and much of their training was designed by Commando officers. The American Rangers – though all three of Darby’s units were deactivated by October of 1945 – are often considered the prototypes of the Green Berets of a later war.

Among those dozen major battles were key roles of the type Rangers trained for… though too often, Darby’s men were used – some say “wasted” – as regular infantry. Arguably their most disastrous engagement was the “meat-grinder” ambush of First and Third Battalions at Cisterna (Italy).

Darby was a man’s man, a soldier’s soldier, and a ranger’s ranger. He trained with his men, led from the front, and made his decisions based on first hand observation at the battlefield.

Starting the war as a captain, Darby was rapidly promoted to Major, Lt. Col., and Colonel; his promotion to Brigadier General was on President Truman’s desk when Darby was killed (4-30-45) by German shrapnel at age 34.

Though a study of multiple battalions does not allow the reader to get to know many individuals – as we would in a unit history such as Stephen Ambrose’s history of Easy Company (of the Second Battalion, 506th Parachute Infantry Regiment, 101st Airborne Division) – it’s a welcome change of pace from the books about particular major battles or specific major invasions. Author Jeffers was fortunate to have rich source material from the likes of (Ranger) James Altieri’s published books and from the writings of William Baumer, Darby’s West Point classmate (who recorded some oral history from Darby while he was briefly assigned stateside after his units were pulled from combat).

Recommended reading for anyone interested in WW2 military history.

13 Responses to The Man Who Epitomized Army Rangers