The Ghostess and Mister Muir

I have always loved the spooky romance, “The Ghost and Mrs. Muir” — 1947’s classic film with Rex Harrison and Gene Tierney. While contemplating that movie in early 2014, I got to thinking: what if the spook was female… and she died in human form 100 years ago?

One of the interesting features of the cinema adaptation is that the new resident of the haunted cottage was hardly ruffled at all by the presence of a ghost — its former owner, a retired sea captain. I was intrigued by the notion of how a story might play out if the new tenant were a MALE and he didn’t even believe spooks really existed.

From there, my novel basically took a life of its own. I re-purposed almost all the names (of people and places) from the movie but I tossed them around quite a bit. For example, I gave the name of the movie’s Gull Cottage to the high school principal, who became Mrs. Gull. The heroine (and Muir’s other love interest) in my novel was named Lucy (after the film’s heroine) Tierney (after the name of the actress who played Lucy).

It was a lot of fun to fit in most of the repeated names of the movie… and I’ve always told myself that anyone who’d seen the film as many times as I have will recognize almost all of my allusions.

In my tagline for the novel’s cover —  No self-respecting Southern girl takes second place to a spook — I wanted to tip off the reader that the ghostess who is haunting Levi Muir has some very human competition. Nothing like a love triangle where one of the participants is a 100-year old ghost!

Despite not believing in spirits, it takes only one haunting for Levi Muir to become entranced with the beautiful ghostess. But will his real-life girlfriend take second place to a spook? 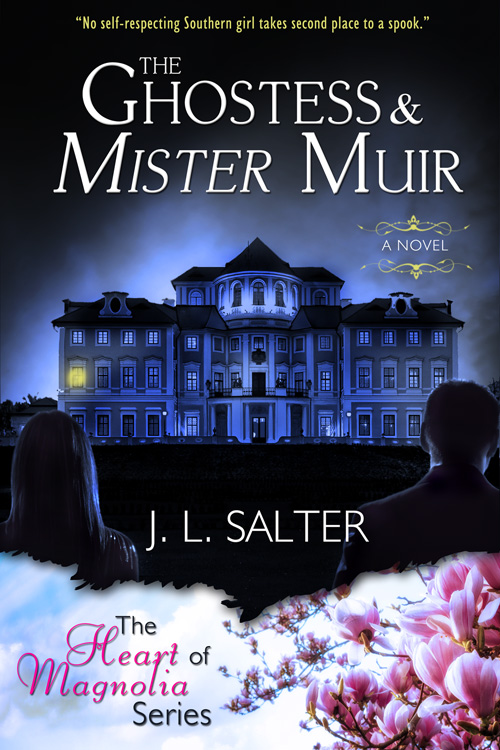 Don’t you love my beautiful cover by Amanda Matthews?

Though he doesn’t even believe in spirits, it takes only one haunting for Levi Muir to become entranced with the beautiful ghostess.

A young veteran recovering from a wrecked relationship, Muir moves to Magnolia for his first year teaching high school English and resides in the renovated old hotel, which everyone knows is haunted.

Despite his skepticism, Muir senses a presence, then smells a unique perfume. Later, he locates an old portrait of beautiful Danielle Gregg, who lived in that suite a century ago, but experienced a tragic death.

His lovely new colleague, Lucy – science teacher and dedicated Spirit-Chaser – tries to convince Muir that the supernatural is real… and not to be taken lightly. Though Muir has been attracted to Lucy since the first day he spotted her, something begins to jam his thoughts whenever she enters his mind.

Intrigued by the beauty and sensuality of the mysterious woman in the portrait, Muir tries to learn more about the ghostess and her untimely demise. Though still skeptical of ghosts and hauntings, Muir can’t shake the feeling there could be more to Danielle’s mysterious 1914 death than the locals believe.

The more Muir encounters the lovely ghostess, the stronger his desire for even more contact! But Lucy’s willing to fight for Levi’s heart, because no self-respecting Southern girl takes second place to a spook.

What about YOU? Have you ever experienced a haunting? Or something you thought MIGHT be a spook?

11 Responses to Revisiting My Spooky Tale