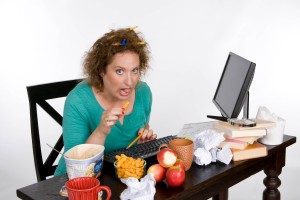 I decided to look through my Kindle content to find a writer to interview, and found a fair number of books, but touching on a few pages here and there, nothing impressed me until I hit Elise Sax’s “An Affair to Dismember”. I was immediately captivated by the premise: a woman who can’t find her roots was being groomed by her grandmother as a matchmaker. Not only did the originality of the story grab me, but the writing hooked me. Perusing through her other works, I find common themes, (great themes): humor and good characters mixed with the protagonists’ fun thoughts which often involve her internally raging hormones. (Did I forget to mention the hunky men?)

I sought Elise out. She agreed to Facebook-friend me and come in for an interview.

You and I have a few things in common: two sons, we write in spurts and with background noise. However, you have your act together far better than I.

I see that you were born in San Diego, and live there now, but you also lived in France working as a journalist. I imagine you have great stories! Do any of your experiences, or those of your time as a private investigator, make it into your works?

Elise: I imagine that I draw on all of my life experiences to write my stories. In Bounty, the main character is an international journalist, and I definitely used a lot of my personal experiences in that book. I had a Jewish grandmother, so writing about Grandma Zelda was easy for me. And as a private investigator, I solved mysteries. So…I guess I have used my experiences!

Matchmakers appear in at least two of your series. Where do they come from in your mind, or experience?
(The advice from the matchmaker grandmother is uproariously funny!)

Elise: I have no idea. I’m divorced and would hardly describe myself as a marriage maven. However, I do think I have a handle on love and what makes people happy, so, I take from that to give advice. I’m also a rabid solver. In other words, I like to solve problems, especially the problems of my friends and family, and I think that’s a form of matchmaking. And being a yenta (look that word up!) [No need! – T.]

Some really strange happenings go on in your books, particularly in the Agatha Bright Mysteries. A number of us here have had ghostly/paranormal experiences. Have you had strange experiences?

Elise: I think my whole life has been a strange experience! Ha! But no, I haven’t seen a ghost…at least not in this life. 😉

I find your characters to be wonderfully unique with their own distinct personalities. The banter between Irving and Doris, (the older married couple who are regulars at Agatha’s soup shop), Norton Perkins, (who runs the UFO shop in the Goodnight Series), and others, are amusing to no end. As outrageous as it all sometimes becomes, it is realistic in your execution. Do you think up all of the conversations consciously, or do your characters ‘dictate’ to you?

Elise: Once I have a handle on the character, the dialogue does seem to pop up out of nowhere. The biggest example of this is the character Ruth Fletcher in the Matchmaker Mysteries. I don’t even have to think to write her dialogue. She’s very loud in my head.

Speaking of UFOs, Star Trek and Star Wars are mentioned in more than one series. Are you a fan?

Elise: I have two older brothers. They memorized all of the episodes of the original Star Trek, and they used to recite the lines while we watched the show. And one of my brothers took me to Comic Con every year, beginning in 1975. So, that might make me a geek. I’m a fan of both Star Trek and Star Wars, but I’m more of a Star Trek fan. I love the optimism of the show.

The descriptions you give of the places are in my opinion absolutely perfect, with enough detail for the reader to be able to picture them clearly without being overburdening or distracting. Are any of your Victorian homes, the lighthouse, shops, (and the like), based on real places?

Elise: The town in the Matchmaker Mysteries was inspired by the town of Julian, outside of San Diego. They’re famous for their apple pies, just like in my town. I visited Santa Fe before writing the Goodnight Mysteries–I drove through New Mexico and did a ride-along with the sheriff. That gave me a lot of material to write that series. As for Agatha, I was inspired by Imperial Beach in San Diego County. It’s a great beach town, despite a sewage problem, just like in my series.

I love the soup shop/book shop; how I would love to run such a place! Unlike Agatha, can you cook? (We can go on a limb and assume that you are a reader.)

Elise: Actually, I’m a good cook. I was trained by my mother, who was the matriarch of a large extended family. However, I hate to cook. I’m so tired of cooking. I mean, how many chickens can one woman cook in her life? My goal is to get really rich and never cook again. Not even toast. As for the soups, I only make the “Million Year Soup” (which is my recipe) and matza ball soup. I do love soup, and I would love to go to Agatha’s shop. I would probably be one of her regulars, and I would sit in the back at the tables behind the stacks of books. 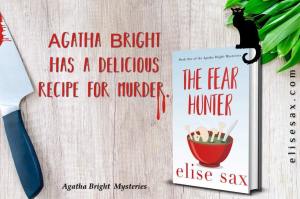 Your characters have definite personalities; do they ever surprise you? For instance, Matilda Dare of the Goodnight series is a character from a book in one of the Matchmaker Mysteries. Did she insist on having her own stories, or did you plot it all along?

Elise: I always knew that Matilda would have her own series. So, that was planned. Yes, many of my characters surprise me. I thought Fred was only going to be in one book in Matchmaker, but I had keep him in all of the books because I loved him. In Goodnight, Matilda was destined for another love, but she insisted on choosing for herself! Do I sound crazy? Writers are a little bit crazy…[I think on that we can all agree! – T]

“Operation Billionaire” is the story of a broke woman who enlists friends to help her win the heart of a handsome rich guy, and is told in a trilogy; “Five Wishes” and “Three Wishes” contain, well five and three in their series, whereas the Matchmaker series has thirteen. Will there be more Matchmakers? Are most of your series open-ended? Do you finish one series before starting another?

Elise: I had planned Matchmaker out and finished it just where I wanted, but I might have a surprise coming about that… Yes, I always plan out the series. I’m a plotter, and I have definite characters arcs and mysteries that I want to play out in a specific number of books. However, that can always change because as we mentioned, characters have a mind of their own. Also, I want to please my wonderful readers and never disappoint them.

I see that you have four stand-alone novels, all seem to be in your girl-without-a-man comedy theme. Are all of these in first-person narrative?

At first thought, I would consider your books more ‘female oriented’, but the character development and humor would definitely work for men. Do you find that you have male fans?

Elise: I think my books are very womencentric. I love women’s stories. I think women are great heroes, and I love to highlight their complicated journeys. I especially like stories about women who overcome great odds and find happiness. I do have a few male fans, which surprises me and delights me!

“Forever Now” is different for you as it is a young adult romance. What inspired you write for younger people? I see it is considered “Book 1 of a trilogy”, so I assume more are to follow. Do you foresee even more YA in your future?

Elise: Forever Now is, I think, the best book I’ve ever written. It’s different than my other Elise Sax books and a very, very personal book for me. However, because it was so different, it didn’t find an audience (although the reviews are very good). I hope to be able to finish the story.

Would you consider the works tailored more toward girls?

My sons are in their 30s and it was difficult to find books to interest them when they were younger, but it’s been easier for my grandson, (who is now 16). Do you find it hard to find books that interest your sons?

Elise: My sons aren’t readers. My oldest son loved Harry Potter and Anthony Horowitz’s books, but otherwise, if it isn’t projected onto a screen, they’re not interested. I do have an idea for a teenage boy story, which I would love to write as a gift to my oldest son. I think he would love it. But first I need some extra time to write it. Hmmm…If I stopped cooking, maybe I could find that time!

You describe newest series, available in the beginning of next year, “Partners in Crime”, not as ‘mysteries’ but as ‘thrillers’. Will you explain the difference and what made you go in this direction?

Elise: Partners in Crime will be more like my book Bounty. A thriller or an adventure for me means that there is a mystery or crime right at the beginning, and the characters are thrust into an adventure not of their making that they have to complete. I’m having the time of my life, writing it. Think of Romancing the Stone. Think of Hart to Hart. That’s what Partners in Crime is going to be like.

Assuming that you have any spare time, do you follow any other creative pursuits?

Elise: My doctor asked me that the other day. He asked what my hobbies were. I said: “I’m a writer!” in more than a little of a hysterical voice. In other words, I’m writing all day every day, and when I’m not writing, I’m thinking about writing. So, no. This is it. I don’t recommend this way of life, though. My car is three years old, and I only have 16,000 miles on it. Living in Southern California, that means I never leave my house! But I can’t stop. I’m a storyteller.

Thank you for being my guest, Elise. Please let everyone know how they can learn more about your works.