I Dress Down These Days

Because I Want to Be Comfortable

Before I address the actual question for this week, let me take you back in time to lay down some context about how I USED to dress.

During my Air Force hitch, I wore a uniform every day — which was a great relief, actually. Never had to waste a minute trying to decide “what to wear.”

During the years I was completing my Bachelor’s and Master’s Degrees, I wore jeans and casual shirts, plus a denim jacket (because most of those academic buildings were cold… especially in the summer).

After I began working as a full-time librarian, I’d often wear three-piece suits to conferences and meetings. But for my regular office work, I’d either be in an ordinary suit or a sports jacket with slacks. Shirt and tie, of course.

As I reached middle age, I rarely wore a three-piece suit any more. And my slacks eventually became Dockers, in various colors like brown, gray, navy, or black. In my library office closet, I usually had at least three sports jackets in different colors — so I could throw one of them on top of whatever I was wearing that day (if there was a meeting or big interview or something). 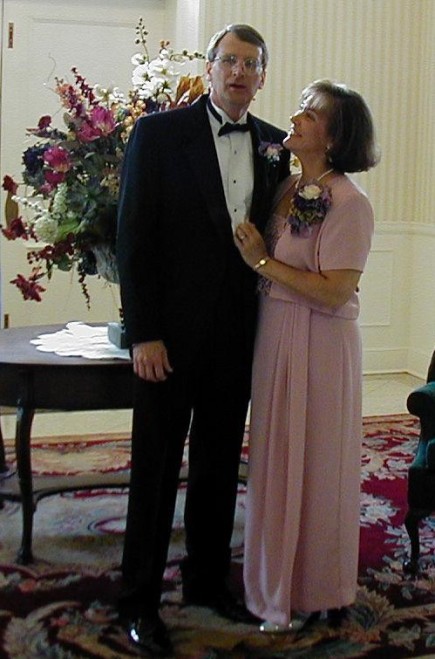 I dressed up for my daughter’s wedding in 2000. First time in a tux for me. Here, with Denise… mother of the bride.

When my daughter got married, I wore a tux — for the one and only time in my life.

I mention all that simply to make it clear that I’ve spent a considerable portion of my life being nicely groomed and neatly attired.

All rules are out now.

When I retired and moved my church membership here, I was still wearing a sports jacket with shirt, tie, and Dockers on each Sunday morning. After several months I realized it was mostly the “old men” who still wore suits and sports jackets… and the most of the rest of the guys were far more comfortably attired. So I dropped the sports jackets and ties. Then I swapped the Dockers in favor of nice jeans.

I dress for comfort. Except for checking on my Mom and going to exercise, I’m almost always inside my house… writing. In warm weather, it’s t-shirt and cargo shorts with house slippers that have enough sole to go outdoors (if needed). In cold weather, I add a long-sleeved Henley and change the cargo shorts to exercise pants.

When I go to exercise, I wear stuff that fits that environment.

On Sundays these days, I’m in nice jeans and a decent shirt. Last few years, I haven’t been able to tuck in my shirt, however, because of the back brace I wear… and that bothers me because I think it looks sloppy. Not many options unless I tuck the shirt and wear the brace outside the shirt. Neither way pleases me, but I don’t have much choice.

To help you understand my all-time most extensive holiday dress-up, please read this blog from a few years ago:

Now, here’s our actual question for this week:

“Do I dress in any particular color or style for holidays or special days?”

Medium answer: On Easter (and for funerals), I’ll squeeze into a sports jacket again.

Longer answer: I try to be clean and decently groomed, but I have neither the budget nor the desire to try to impress anyone with my clothing labels or selection. I dress for comfort and attempt to be presentable. The back brace complicates things. My foot problems keep me in cushiony sneakers.

It is what it is.

21 Responses to I Dress Down These Days