Guest Author: Diana Lloyd and About an Earl

I feel so fortunate to belong to several local writers groups. Each one offers something different, and each has its own mix of authors. Diana Lloyd is a fellow member of the Grand Rapids Region Writers Group and is currently celebrating the release of her second historical novel, About an Earl. This part of her regency series called It Happened in the Ballroom. If you want to read about the first in the series, as well as her experience with RWA’s Golden Heart contest, check out her guest post from last year. This time, I asked her to share with us her road to writing historical romance, and she kindly agreed. Here she is!

I’m a history geek. You kind of have to be to write historical romance.

To be fair, I may have been a geek before I met her books. All I know is that I was drawn to them like an eager young moth to a flickering flame. 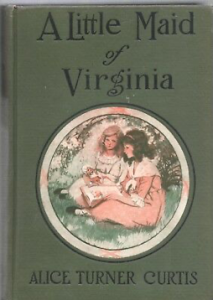 For those to whom her name means nothing, Alice Turner Curtis wrote a 24-book series named “The Little Maid’s Historical Series” between 1910 and 1937. I suspect this was slightly before your time. It was years and years before mine, but not my mother’s and grandmother’s.

My wise, thoughtful, grandmother purchased the books for two reasons (so I’ve been told) the first being that she thought my mother would enjoy them (she didn’t) the second because after living through the depression there were two things my grandmother insisted on always having in her house so as not to look “poor” – a piano and a full bookcase.

Perhaps I owe my love for history to granny’s vanity. I was, as they used to say, a “sickly” child in my elementary years. Hospitalized or put on bed rest on more than one occasion, I’d sometimes miss a month of school at a time. I had a LOT of time to read and I loved it. To be fair here I should point out that my mother still argues that I wasn’t “that” sick and faked it so I could stay home and read.

Maybe she’s right, but the point is I got away with it. I might have become a piano prodigy if I’d been allowed to touch the darn thing.

Sadly, I no longer have the books (due to the great Spring Cleaning of 1978) so I cannot attest to their historical accuracy. They were, after all, fiction written for children.

No matter. My sister could have Nancy Drew and the Bobbsey Twins, I was already all about the historical fiction of early America. Up until I met the books of Eleanor Alice Hibbert.

You might know her better as gothic romance author Victoria Holt. As I aged my fickle allegiance jumped the pond from the forts and cabins of the American Revolution to the castles and keeps of old Europe. I laid bare my teenaged heart reading of haunted hallows, mysterious guardians and their innocent, virginal wards.

Yeah, it was a phase. But there was no cure for it once I started. Gothic novels led to…pirates. Let me tell you, those 1980’s pirate romance novels were trippy—they were on a ship, authors had to get creative! Pirates gentrified into Georgian and Regency era lords and ladies and that seems to be where I’m stuck. The 1700’s and early 1800’s is my era. Maybe I’ve always had an old soul.

What gets your geek on?

About an Earl is available at Amazon, Barnes and Noble, iTunes, and Kobo.

My thoughts: This second book in the Ballroom series is just as delightful as the first! Ms. Lloyd presents an engaging story with fascinating characters, a fast-moving plot, and plenty of humor. Jewel is an enterprising and quick-thinking young lady, and Oliver is a wounded hero with a lot of self-doubt, but enough sense to know when to be firm and when to follow Jewel’s lead. I especially loved the secondary characters, particularly Penry, the earl’s twin brother, and Elvie, the mysterious but enterprising maid who appears from nowhere. Can’t wait to read Book Three!

During her first career, Patricia Kiyono taught elementary music, computer classes, elementary classrooms, and junior high social studies. She now teaches music education at the university level. She lives in southwest Michigan with her husband, not far from her five children, nine grandchildren (so far), and great-granddaughters. Current interests, aside from writing, include sewing, crocheting, scrapbooking, and music. A love of travel and an interest in faraway people inspires her to create stories about different cultures. Check out her sweet historical contemporary romances at her Amazon author page: http://www.amazon.com/Patricia-Kiyono/e/B0067PSM5C/
View all posts by Patricia Kiyono →
This entry was posted in authors, childhood, decisions, Guest author, Guest author post, historical, history, New Release, novels, Patricia Kiyono, romance and tagged About an Earl, Diana Lloyd, Road to publication, writing historical novels. Bookmark the permalink.

10 Responses to Guest Author: Diana Lloyd and About an Earl