Our stay-at-home orders are still in effect, and I’m still sewing like crazy, in addition to grading final exams. But I did find some time to read. If you get a chance to check some of these out, you might find something you like:

Love’s New Beginnings by Diana Stout
I enjoyed reading Charlene and Logan’s story. Charlene is a concert pianist whose career is halted when she’s mugged in NYC. She arrives at her late grandfather’s home in rural Michigan thinking she’s there only to recuperate, but she finds much more. I loved the strong and industrious Charlene. Despite her hardships, she manages to keep a level head and move on. She doesn’t dwell on what she can’t change, but simply gets to work. I also enjoyed several minor characters, like Logan’s son Brian and Josie, one of the workers at the orchard. This is a nice, light romance. 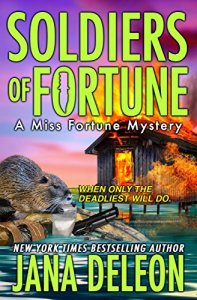 Soldiers of Fortune by Jana DeLeon
A Miss Fortune Mystery, Book 6
Fortune Redding and her geriatric friends can’t have a moment’s rest with all that goes on in Sinful, Louisiana. With Deputy Carter LeBlanc under doctor’s orders to take it easy, and the town deputy ill-equipped to handle anything stressful, it’s up to the Swamp Team 3 to investigate when an explosion rocks the town. Especially since the remains tossed about indicate the presence of a meth lab. With some unexpected assistance from the mob, Fortune, Ida Mae, and Gertie start digging. And as always, the journey is full of action and laughs.

Hurricane Force by Jana DeLeon
A Miss Fortune Mystery, Book 7
In this installment, Fortune experiences her first hurricane. The driving winds bring a lot of wet cash, which causes much excitement until the bills are identified as counterfeit, and a tip from Fortune’s partner alerts her to a connection with the man who’s taken out a hit on her. In the meantime, the long-lost husband of Sinful’s mayor suddenly makes a reappearance, has a very public argument with Celia, and then turns up dead a few days later. Fortune has a feeling the appearance of the money and the murder are connected, and the Swamp Team 3 (Fortune, Ida Belle, and Gertie) are on the job.

I’m still enjoying this series and I’m so glad I kept reading after the first one, despite the cost. I had a concern with the first one that there didn’t seem to be a character arc of any kind, but now that I’m almost halfway through the series I can see that there is one – it’s just a lot more gradual. I’m seeing the characters change and the relationships are developing between Fortune and the residents of Sinful. I’ve already started reading Book 8!

Folded Corners by Idabelle Aylor
This is Idabelle’s debut novel and the first in a planned series featuring an eccentric senior citizen named June and the people in her life. June’s neighbor Sofey has had a lot of sour luck in the romance department and has resigned herself to the single life. She’s busy delivering meals to seniors. In the evenings she watches tv with June, or watches movies with her cat Rob Roy, but on Wednesdays she goes to a local bookstore called Folded Corners. She finds a kindred soul in Riggin, a minor celebrity who had appeared on a dating show similar to The Bachelor. She feels safe knowing he’s not going to be more than a friend, since he’s married – she watched his wedding on the show. Riggin feels a connection with Sofey, but has to stay married to Rita for one year in order to win a million dollars. But he needs to decide if getting that money is worth losing out on the love of his life.